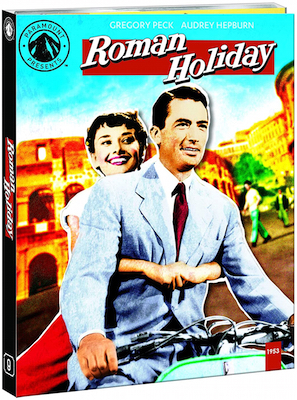 As this new “Paramount Presents” Blu-ray aptly demonstrates, 1953’s Roman Holiday manages to remain as fresh and vibrant as ever while simultaneously serving as a perfect time capsule of the era in which it was made.

In addition to just being a charming romantic comedy with a fun premise, the film managed to embody a number of significant elements of Hollywood history — not the least of which is the first major screen role for Audrey Hepburn, who snagged a Best Actress Oscar at age 24. Noted film critic and historian Leonard Maltin in the bonus materials calls it the greatest cinematic introduction anyone has ever had.

Then there’s the audacious decision by director William Wyler to actually shoot the film on location in Rome, rather than the more conventional practice of re-creating parts of the city on a soundstage in Southern California.

The delightful screenplay was largely the creation of Dalton Trumbo, though almost no one knew it at the time since he was blacklisted and attached his friend Ian McLellan Hunter’s name to it. At the time, the Academy offered separate awards for story and screenplay, unlike the distinct original and adapted screenplay awards offered today, and Hunter ended up as the named nominee for both awards on behalf of the film, sharing screenplay credit with John Dighton. It won for Best Story, an award credited to Hunter for 40 years until the Academy recognized that it was actually Trumbo’s Oscar.

Trumbo finally received an on-screen story credit during the restoration of the film carried out for its 2002 DVD release. The Writers Guild of America finally recognized Trumbo’s co-screenplay credit in 2011, so this new Blu-ray restoration offers the studio’s first chance to reflect that on-screen (the credits now attribute the story solely to Trumbo, with the screenplay by Trumbo, Dighton and Hunter).

The story involves a young princess (Hepburn) from an unnamed European country who grows tired of being coddled and pampered during a tour of Europe when she can’t actually experience any of the places she’s visiting. So, during the Roman leg of the trip, she sneaks out the royal enclave at bedtime, despite her handlers drugging her to help her sleep. She ends up passing out somewhere in the city, where she is discovered by an American passerby named Joe (Gregory Peck), who ends up letting her sleep it off at his apartment after being unable to find a taxi driver who will take responsibility for her.

Joe turns out to be a journalist assigned to cover a press event with the princess the next day, but ends up oversleeping due to tending to the strange girl in his bed. He leaves her to sleep as he rushes to the office to try to bluff his editor that he conducted the interview, only to be called out by the fact that the event was canceled because the princess was “sick.” Recognizing her picture in the paper as the girl in his apartment, he quickly devises a scheme to sell an exclusive story about the princess to the paper.

When she finally regains her senses, the princess doesn’t admit to her true identity, but ends up unwittingly joining Joe and a photographer buddy (Eddie Albert) for a day of sightseeing around the city, thinking she is evading the royal guards sent to retrieve her when they’re busy chronicling her adventures throughout the city.

The idea of someone with a life of privilege wanting to experience how the other half lives was certainly not a new concept in Trumbo’s day any more than it would be today, but Hepburn’s performance as the princess makes her instantly relatable. Modern audiences accustomed to shows such as “The Crown” will be quite familiar with the responsibilities and expectations placed on royalty. Roman Holiday arrived in theaters not long after the coronation of Queen Elizabeth II, who herself ascended to the throne at age 25, and the film’s timelessness is only aided by the ease in which one can imagine the young queen or her sister, chafing against the constraints of their duties, ending up in an adventure not unlike this one.

Given its simple premise, how it ends, and how Peck and Hepburn made such a winning duo, had it been made in the past 20 years or so Roman Holiday would be practically begging for a sequel. Yet, while there were supposedly attempts to make one, it never happened, though the story has been recycled quite a few times since then.

Paramount’s latest restoration of the film looks great, considering how poorly the film’s original elements were reportedly in — likely a factor of it being shot on location and using local European development houses. The new digital restoration techniques bring out a lot of detail in the black-and-white cinematography, with the only real fuzziness coming from stock footage newsreels the film itself originally used.

For the film’s Blu-ray debut, Maltin’s seven-minute analysis of the film turns out to be the only new extra produced, though the disc still has plenty to offer, carrying over most of the featurettes from the 2008 DVD release.

These include a 12-minute Hepburn tribute and a half-hour retrospective of her work at Paramount, plus a 12-minute featurette about Trumbo (made years before the biopic with Bryan Cranston), and the nine-minute “Rome With a Princess,” which profiles many of the film’s shooting locations.

The disc also carries over a couple featurettes that are more about Paramount than Roman Holiday — owing that they were intended to be used on many of Paramount’s anniversary releases when produced in 2008. These include a five-minute piece on costumes that appeared in the studio’s films, and a 10-minute rundown of Paramount’s 1950s films.

While the inclusion of most of the previous disc’s extras is a significant step up for the Paramount Presents label, which typically jettisons almost all previous supplements, fans should note there are still some notable omissions from previous Roman Holiday disc treatments, particularly the 2002 DVD.

That disc had a featurette about the restoration of the film that was done at that time, which carried over to the 2008 DVD but is obsolete now given the latest restoration, so its omission is understandable. Strangely, though, there is nothing about the new restoration to replace it.

Other supplements from that 2002 disc that didn’t make it to 2008, and are likewise still omitted, are a half-hour retrospective on the film and a 14-minute profile of costumer Edith Head. However, it seems to be Paramount Presents practice to only carry over supplements that are available in HD, so that might explain why those earlier featurettes didn’t even linger onto the 2008 re-release.