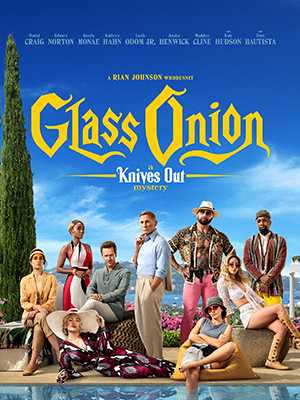 Writer-director Rian Johnson’s second Benoit Blanc mystery, Glass Onion, may be an even more satisfying viewing experience than the first, 2019’s Knives Out.

While the film’s structure still relies on misdirecting the audience and flashbacks to add context, the fundamental mystery itself is better crafted and not so dependent on questionable character interactions.

The story this time around involves a tech billionaire (Edward Norton) who invites a close circle of friends to a retreat on a secluded island, where he has planned an elaborate murder mystery game for them to solve. Somehow an invitation makes its way to celebrity detective Blanc (Daniel Craig), despite him having never met any of the participants.

Blanc’s presence turns out to be fortuitous when one of the guests actually ends up dead, prompting the detective to peel back the layers of the other guests’ friendships to reveal how any number of them have a motivation for murder, while some aren’t even who they claim to be.

This isn’t the type of mystery that the audience can play along with since several details are deliberately hidden from viewers thanks to a non-linear presentation. Scenes presented from one perspective in the set-up are revisited later from a different character’s point of view, changing the context of how viewers are supposed to interpret the plot.

The film’s biggest downside might be how it anchors the story in the midst of the pandemic, when such a setting seemingly has no bearing on the proceedings aside from how it sets up a ballsy plot point that pays off in the resolution. Including such specific touchstones of the era such as masks only to have the characters ditch them early on for a wealthy soiree with no consequences might be a subtle commentary on privilege, but could end up dating the film in unfortunate ways.

Otherwise, the film’s only limitation is the same as with any mystery story — how many repeat viewings would be warranted once the secrets are revealed. That’s when films such as this have to rely on its performances, quirky characters and humor, and on those fronts Glass Onion conducts itself rather well.

The film is completely unrelated to Knives Out, aside from being another case for Blanc to solve in the great tradition of fictional detectives. The earlier film isn’t even referenced, aside from Netflix slapping the subtitle “A Knives Out Mystery” on the poster (it does not appear onscreen). Wanting to make sure the marketing helps the audience understands this is a follow-up to the earlier hit film is one thing, but perhaps “A Benoit Blanc Mystery” would have made more sense.