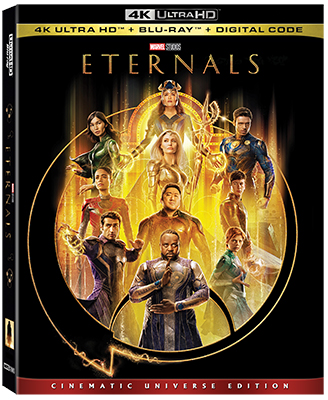 For 25 films, the Marvel Cinematic Universe gradually adapted disparate concepts from various comic books that wouldn’t seem to mesh in a live-action setting and somehow made it seem to it together cohesively.

But the 26th film, Eternals, pushes the boundaries of the franchise’s formula so far that it almost seems too bizarre even for the MCU. Following the massive “Infinity Saga,” Eternals is something of a restart for the MCU, telling a story that challenges what audiences already knew about it.

Based on characters from Jack Kirby, who had a knack for outlandish cosmic adventures, Eternals tells the story of 10 alien heroes sent to Earth thousands of years ago to protect humanity from predators called Deviants. They were sent on this mission by Arishem, a god-like being called a Celestial who tells them that allowing life to flourish on Earth is the key to the creation of a new Celestial who will in turn go on to create new stars and planets.

These concepts aren’t presented metaphorically. The Celestials are shown as literally creating new stars and solar systems and constructing the cosmos as if it were a Lego playset.

Having aided in the development of human civilizations since the dawn of written history, the Eternals survive into modern times awaiting news that they can return home, despite seemingly defeating the Deviants hundreds of years prior and having gone their separate ways to integrate into humanity. However, when the return of the Deviants seems to portend apocalyptic news for Earth, the Eternals must reunite to stop them once again.

Director Chloé Zhao, coming off an Oscar win for Nomadland, has crafted a beautiful-looking comic book movie that honors Kirby’s legacy. The story, on the other hand, is often ponderous on the verge of being dull, as if the MCU suddenly decided to get so pretentious about its own success that it’s trying to win a dare about its ability to put anything on screen.

A big problem is that in trying to be its own thing and setting up a bold new direction for the MCU, Eternals raises a lot more questions than it answers about how it fits in with the previously established storylines. Why the Eternals didn’t intervene in the battle against Thanos, for example, gives rise to a tepid explanation at best. A bigger issue fans might have is, when the Earth is seemingly endangered, why the Eternals alone must deal with it without a single one of the remaining Avengers turning up to investigate what is going on.

And it’s not as if audiences don’t know those other heroes are still hanging around out there, since the MCU has already presented other movies and TV shows about what some of the established characters have been doing following Avengers: Endgame. These projects, owing to dealing with the more familiar aspects of the MCU, have been better received by fans, with the massive success of the 27th MCU film, Spider-Man: No Way Home being the epitome of that. One can only imagine Eternals being better received over time as its revelations about the history of the MCU begin to bear fruit.

The Blu-ray and digital editions include a smattering of extras, starting with four deleted scenes that total about six minutes but don’t really add much to the story.

The making of the film is covered in the eleven-minute “Immortalized” featurette, supplemented by a commentary with director Chloé Zhao and visual effects supervisors Stephan Ceretti and Mårtin Larsson that provides an insightful look at the technical craft employed in making the film.

Less useful is the five-minute “Walks of Life” featurette in which the filmmakers and cast pat themselves on the back over the diversity of the cast, gushing over having a superhero team that reflects the demographics of the modern world despite the characters being aliens who are thousands of years old.

Rounding out the package is a two-and-a-half-minute gag reel.