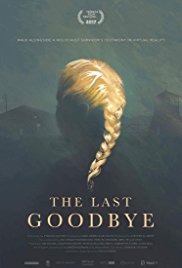 The Last Goodbye, a virtual-reality film that brings the viewer inside a Nazi concentration camp with Holocaust survivor Pinchas Gutter, won a top prize at the 2018 Lumiere Awards hosted Feb. 12 by The Advanced Imaging Society.

The film was honored with the Creative Arts Award, VR – Documentary Jury Prize, at the awards ceremony held at the Warner Bros. Studio in Hollywood.

In the film, powerful testimony of the tragedy of the Holocaust is preserved for the first time in poignant, room-scale VR, as Gutter takes audiences with him on his final visit to Majdanek Concentration Camp where his parents and sister were murdered during World War II.

The Last Goodbye was created by award-winning filmmakers Gabo Arora and Ari Palitz; produced by Stephen Smith, executive director of USC Shoah Foundation; co-produced by USC Shoah Foundation, Here Be Dragons, MPC VR and OTOY; and produced by Tim Dillon of MPC VR, Jonathan Dotan of OTOY, Patrick Milling Smith of Here Be Dragons, Samantha Storr and Chris Milk of Within. It features an original soundtrack by Dražen Bošnjak of Q Department, and will being distributed by Within.

“Using virtual reality presents a new and engrossing way to tell this important story,” Smith said. “We are honored and grateful for the recognition, particularly because it shines a light on history and its relevance today. We are forever indebted to Pinchas Gutter, whose participation gave the project life.”

To create the immersive experience, the team traveled with Gutter to Poland in 2017 to capture tens of thousands of photos and hours of 3D video to create an experience that enables viewers to virtually walk with Gutter as he tours the railway car, gas chamber, shower room and barracks of Majdanek.

“Our ambition has been to create entirely an entirely new grammar for what’s possible within a narrative and room scale mix, in a documentary format,” Dillon said.” We’ve faithfully recreated the rooms of the Majdanek camp so you can inhabit them with Pinchas, you can feel his story by being there with him, eye to eye.”