Netflix is projected to become the top subscription streaming video service in South Korea less than four years after launching in the country.

SNL Kagan and other research firms contend Netflix South Korea is expected to reach 4 million subscribers in 2020, up from less than 2.4 million subs in 2018.

“Netflix is trying to become a channel to introduce Korean content to people around the world,” Kim Min-Young, director for original Korean content at Netflix, said in a statement. 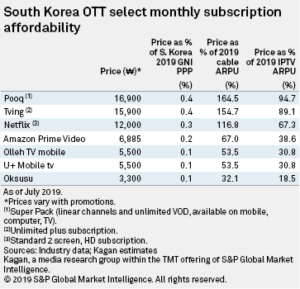 While Netflix has licensed local content such episodic series, “Man x Man,” “Chef and My Fridge,” and “Abnormal Summit,” among others, it has made strides in producing localized original content.

To thwart a Netflix takeover, major telecoms SK Telecom and CJ E&M pledged to partner their SVOD services — Pooq and Oksusu — a strategical move that would combined 13 million subs — but has yet to materialize.

Oksusu, which reportedly spent $10 million on orignal content in 2018, and Pooq are expected to increase original content spending upwards of $180 million once their merger is realized.

Regardless, Kagan contends Netflix remains a better economic deal based on a monthly subscription price of 12 won, which is 25% cheaper than Pooq.

The research firm said Netflix would be wise not replicating its move in India with a cheaper mobile-only subscription offering. Kagan said such an offering in South Korea would cannibalize subs from its traditional platform.