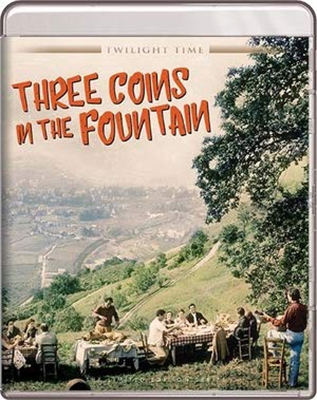 On a commentary carried over to Twilight Time’s newly 4K-remastered Blu-ray of Three Coins in the Fountain from a long ago DVD, the great academician/film historian Jeanine Basinger is correct in treating this best picture Oscar nominee (an admitted whopper of a stretch) as an artifact of an age. By this, no significant disrespect is meant — by her or by me — because this supremely shot confection with a pinch of socio-economic edginess is a 2.55:1 early CinemaScope movie to feast your eyes on if you want to see exactly what pop moviegoing, to say nothing of studio professionalism, was like in 1954.

I can remember standing at the main corner of my hometown at age 7 and watching a couple handymen with buckets of liquid adhesive pasting up a humungous Fountain six-sheet with their long brushes; you could see for half-a-block, the same way one soon could for Living It Up, Seven Brides for Seven Brothers and Broken Lance, which came out shortly thereafter. The bigger-city newspaper ads also gave Fountain lots of ink, emphasizing in co-equal status a cast of six principals (that would be three couples, thank you) of slightly varied age groups. And, because this was what the movie substantially had to offer — along with an enormously popular title tune that later won the best song Oscar when that still meant something — the Rome-in-widescreen travelogue aspects, with side trips to Venice (the aerial view as Louis Jourdan makes his landing approach here is something) and a trip to the mountainous country where it’s all food, wine and soul-kissing.

All of the early Cinerama movies, which ranked at or near the top of annual ’50s’ box office performers despite playing in only a few cities, were travelogues — showing mass audiences locales they had never before seen. And seeing these sites in panoramic fashion, audiences were encouraged to get on the plane themselves, and Fountain (as in the long movie-friendly Trevi Fountain) is said to have upped the number of those who would soon or eventually experience La Dolce Vita for themselves.

Taking Cinerama’s lead in a CinemaScope movie, Fountain has an opening unlike any other that I can recall: as an uncredited Frank Sinatra sings the title tune that gave him a No. 4 Billboard hit concurrent with the Four Aces’ recording hitting No. 1, the opening credits are momentarily tabled so that cinematographer Milton Krasner can take in the irresistibly wallowing travel-brochure sights with the expected glory. Given that Luchino Visconti’s Senso didn’t reach the U.S. until years later, I would have given the ’54 color cinematography Oscar to Sam Leavitt for his innovative shots for the Judy Garland A Star Is Born, but one really can’t argue with Krasner’s win here. He was a master of widescreen gloss (and yet there are Fritz Lang noirs on his resumé as well, to throw us off the track).

The story is that old yarn (and matter of fact, old 20th Century-Fox yarn) about the stake-out of eligible males by three friends and/or co-workers in significantly postwar Rome — a time when a favorable currency exchange rate gives these women (though in 1954, they’d have been “girls”) a somewhat higher financial standing and relative confidence than they’d get at home. The oldest (Dorothy McGuire) secretly yens for the writer she’s served for years and played by that unlikeliest of box office forces Clifton Webb (though he was — and gets top billing). Another (Jean Peters, who was a fairly major star for nearly a decade before she wed Howard Hughes for whatever reason) is a secretary at a U.S. government agency; she’s unambiguously hot for translator Rossano Brazzi — this is mildly frank for the movie day — though it’s not halting her imminent return to the States. The third (Maggie McNamara) is Peters’ green but guile-prone replacement, also from the U.S., with her eye on a handsome piccolo-playing prince (Louis Jourdan).

McNamara is really the only one of the three who deals in “machinations,” though the gotta-getta-man sentiments here inevitably limit the movie’s appeal in a new century, even if the entire concept is played lightly for harmless chuckles. But, if you’re standing outside of the movie, McNamara’s performance is the most intriguing because this is only one of three leads or shared leads she had on the screen after winning a ’53 Oscar nomination for Otto Preminger’s once scandalous The Moon Is Blue. McNamara was a tragic case like Elizabeth Hartman who disdained the Hollywood game and later ended up a suicide, as Hartman did. She was cute, appealing and sometimes compared to Debbie Reynolds, though she always reminded me as of less ethereal and more brass-tacks Audrey Hepburn. McNamara’s last big-screen credit (though she did do a “Twilight Zone”) was a small part in Preminger’s The Cardinal, which I only bring up — for Criterion-lobbying reasons — because even the foreign-region Blu-ray of that impressive production is so visually wanting (robust sound, though).

Basinger is right to concentrate on Fountain’s absolutely pro-job aspects of the production — from Krasner, to the Sammy Cahn-Jule Styne title hit, Victor Young scoring, the Dorothy Jeakins costumes (yes, yes, yes), the editing by William Reynolds (Wild River, The Sound of Music, The Sand Pebbles, the first half of The Godfather, including the wedding sequence) plus the picture’s overall look, which is pretty spectacular for a light romantic comedy-drama. Director Jean Negulesco wasn’t exactly an auteur but The Best of Everything eventually iced it that he had become became something of a specialist in glossy widescreen movies about working women — though by the time he got around to remaking Fountain in a Madrid version for a 1964 Christmas release, the principals came off as airheads and the movie seemed out of its time in a year that had begun with Dr. Strangelove, to say nothing of the Beatles invasion. Two earlier movies of his I like a whole big bunch: Deep Valley and Take Care of My Little Girl.

All this said, Twilight Time’s Blu-ray presentation of Fountain is pretty striking in its exact replication of how it looked way back when, what with its 4.0 early stereo and 4K polish that demonstrate why Krasner got his Oscar. Speaking purely commercially, this is a movie where just about everything worked, though if you ever want to talk about its best picture nomination at the expense of, to name two, A Star Is Born and Rear Window, I promise to be less sanguine. I’d also add Johnny Guitar to that snub list, except that there’s not a day of history when Academy members would have had a clue of what was going on at the Republic backlot.