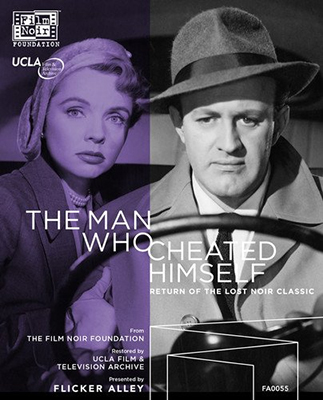 Folks familiar with The Man Who Cheated Himself often bring up its offbeat casting, though speaking as one who just recently fell into a YouTube clip of Lee J. Cobb as one of five singing-dancing personalities on an episode of “The Dean Martin Show,” I’m not irrevocably floored at seeing the then future Johnny Friendly taking on a romantic dimension in this indie noir produced by Jack L. Warner’s estranged son (Jack B.).

In other words, Cobb does get to wear a suit, puff on cigarettes at work (Cheated’s cool San Francisco locales aren’t the only thing that make it a period piece) and kiss a dame for whom he has an itch.

As for the dame … well, that casting is indeed something else. On the bonus look-back featurette included on Flicker Alley’s new Blu-ray of the nifty UCLA Film & Television Archive restoration, Eddie (“Czar of Noir”) Muller quotes Folsom Prison Blues to elucidate the character of this rich society type, who has caught Cobb’s eye, to say nothing of his libido. Which is to say that she shoots a man just to watch him die — even though it must be said that events transpire so quickly that it’s no slam-dunk to pinpoint her exact motive. Still, it’s messy, because she did indeed hate the victim in the first place. And he was her husband (messier still). And, cop boyfriend Cobb was in the room, even if it wouldn’t necessarily have been his preference (a full plate of lasagna tossed at the wall).

But getting back to the casting, this unholy wife — a description I’ll just lift from the title of 1957’s Rod Steiger-Diana Dors Technicolor potboiler — is played in atypically over-the-top fashion by, of all people, Jane Wyatt. And, yes: that Jane Wyatt — once of Lost Horizon but most memorably identified with the role she’d soon own: “perfect” mom Margaret Anderson on TV’s “Father Knows Best.” You can just hear her saying to the Anderson kids: “Well, before your father and I were married, I shot my first husband to death — though, actually, he was my second husband — and then a detective friend who was kind of sweet on me took charge of disposing the corpse.” This, at least, would answer the question of why not just Bud but all three Anderson offspring were so messed up (which I, for one, always thought was a great show’s secret weapon).

So, this is the Cheated premise, though there’s still one more wrinkle. New to the police force is an about-to-be-married rookie (John Dall, in more against-type casting) who is not just Cobb’s younger brother but one assigned to work alongside him. And the kid has so much aptitude when it comes to dissecting inconsistencies in a case that’s ironically under Cobb’s very jurisdiction that the older sibling doesn’t know quite what to do (he has enough problems as it is). In terms of a broad, barebones reading, the premise is not too dissimilar to the one in 1952’s Scandal Sheet (directed by Phil Karlson from Sam Fuller’s source novel) in which the editor of a New York rag kills his long-estranged wife and now must deal with a talented young reporter/protege of his who’s about two steps behind in cracking the case.

Actor Dall, of course, played a good guy at heart in Joseph H. Lewis’s classic Gun Crazy (bank knockoffs or not) — but there was something about him that seemed a little “off” in his craving for bad-girl wife Peggy Cummins. Turns out, per the Cheated bonus doc, that Lewis cast Dall because he was gay in real life, and Muller notes that the actor’s projected screen image was more in sync with his role in Hitchcock’s Rope — and, I might add, for his small role in Spartacus, where Dall’s unctuous Marcus Glabrus character sits with Laurence Olivier’s Crassus in the George Steinbrenner box seats as Kirk Douglas and Woody Strode prepare to fight to the death. In Cheated, Dall is decent enough at projecting rookie enthusiasm, and that’s a necessity in the role). Quite striking, though, is actress and future ABC news personality Lisa Howard, who plays his new bride. Though potentially stuck in a throwaway part, Howard is quietly but potently attractive as a kind of well-kempt bohemian that I’ll just bet was true to the period. Howard, who in real life apparently slept with Castro in pursuit of what became a big scoop at the time, was eventually fired by her network over other politically-related activities. Later, she took hundred or so pills in a parking lot, which immediately killed her at age 39. On a July 4th.

At the time of this film, Howard was married to its director (Felix E. Feist). The latter never had big bucks to work with, but even beyond teaming Nancy Reagan with a severed head in 1953’s Donovan’s Brain, he made some movies I like: this one; Deluge; The Threat, Tomorrow Is Another Day; and especially The Devil Thumbs a Ride. (The last is one of those movies, along with Dillinger, Born to Kill and Reservoir Dogs, to offer a guarantee that Lawrence Tierney, even if he were still alive, wouldn’t be starring in any fictional adaptation of Won’t You Be My Neighbor?). According to film historian Julie Kirgo — who’s interviewed here along with czar Muller, Feist’s son Raymond and recent Michael Curtiz biographer Alan Rode (who, along with Muller, is one of this disc’s four credited producers) — Feist only had something like five days of on-the-pavement location shooting in San Francisco. This is beyond amazing.

I’m always struck by the irony of how low-budget postwar filmmakers often had to shoot on the streets of out economic necessity — which is now one of the components that make those films look so vital today (D.O.A. is another that comes to mind). Meanwhile, the same era’s studio-bound noir from the majors looks like exactly that, as taxis make their ways down backlot streets that weren’t really that mean. In any event, Feist got everything there was to get out of his shoe leather and tire tread, and this picture is a veritable travelogue of vintage locations. And then, these visuals get punctuated by a terrific then-and-now bonus section look at this same shorelines and structures, including the buildings and especially corridors of formidably photogenic Fort Point near the Golden Gate Bridge. Vertigo fans will have a grand old time here.

Cheated is the latest baby from the Film Noir Foundation, which was also a major player in the rescue of Woman on the Run and Too Late for Tears before they became Flicker Alley Blu-ray releases as well. It, too, was a distribution “orphan” that fell through the preservation cracks; the younger Warner put it together for distribution by 20th Century-Fox, which apparently gave it somewhere between one and a smattering of year-end, 1950 bookings before putting it into general distribution in ’51. As a point of reference, it didn’t get to my hometown until the first week of May, where it got booked into the smallest downtown movie house — the one where the classier Republic Westerns played — in subordinate billing to Britain’s 7 Days to Noon, which had just taken an Oscar for best story.

That’s a pretty fair double bill — and certainly more enticing than what I saw listed for most of the summer on my neighborhood marquee. The print here is better than I ever anticipated, with big chunks of it nearly immaculate. I don’t know where the restorers are even finding these acceptable copies, which are then simonized to the hilt, but this is a laughably keen improvement over the Cheated atrocities that run on YouTube. And though I’ve never seen it on the old Alpha DVD, even the jacket on that one makes my eyes bleed.