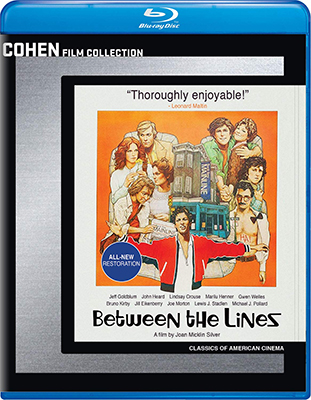 As an easygoing, era-specific comedy that both lauded and poked mild fun at the disillusioned hip, Joan Micklin Silver’s Between the Lines (with a knowing script by Fred Barron) also had at least a couple of elements that made it ahead of its time and thus an attention-getting view when seen today. One was general and the other specific — the first dealing with male attitudes toward their co-workers and girlfriends in and around the Boston newsroom of an alternative weekly. The guys aren’t exactly blatantly crude; in this milieu, you’re going to see centerfolds on the walls. But often they’re unmistakably patronizing toward women — especially when it’s women who seem to work more and procrastinate less.

The other element was real crystal ball stuff in terms of what is still happening to newspapers: There’s a potential new publisher working the wings — the type who talks a good game but will likely, if the deal does materialize, purge what he can from a publication whose sales are already slipping so it can more easily fit it into his cookie-cutter chain. The 1977 movie didn’t know it at the time, but the feel-good Reagan era was just three years away, and alternate papers aren’t designed to make readers feel all that great. The makers also couldn’t have known that the actor playing the potential publisher (Lane Smith) would end up playing Richard Nixon in the TV movie of The Final Days (and to considerable acclaim). It’s the kind of kicker that can make a movie get better with the years without even trying.

Otherwise, low-budget Lines is modest enough to pass as a more politically savvy feature version of “Friends” — though, so as not to go overboard on the comparison, one that’s far more up-front about the sex and where the quality of apartments is about 20,000 leagues down the food chain (as is the quality of the food in the refrigerators). At the time I first saw this picture — which was when I showed it in the AFI upstairs screening room to the key DC entertainment journalists to rollicking enthusiasm — I didn’t know a lot of the key actors, who were not yet widely known. It marked the first time, for instance, I’d ever seen John Heard and only the second time I’d seen Jeff Goldblum after he’d blown a hole in the screen with a couple amazing scenes in Paul Mazurksy’s grand Next Stop, Greenwich Village. Lindsay Crouse, though, had recently made a strong impression with her memorably down-to-earth turn in Slap Shot, the Paul Newman/George Roy Hill hockey romp that had opened just two months earlier.

So in terms of engaging performances coming out of left field, the movie was something of a surprise. Heard is the paper’s borderline funk-affected reporting ace with an on-and-off thing for photographer Crouse. Colleague Stephen Collins, an object of envy because he’s just gotten a book advance, is in a stormy relationship with his dancer wife (Gwen Welles, previously the unforgettable “Sueleen Gay” from Robert Altman’s Nashville). Goldblum plays the rock critic/wannabe pickup artist— how could he not in this kind of movie? —  perpetually stoned on life.

Jill Eikenberry is the office typist plus seemingly the staff’s least assuming member, but then we see her come through in the clutch at the end. Bruno Kirby is the rookie reporter — so green that he makes even Goldblum look polished, and bean counter Lewis J. Stadlen outfits himself in manner fully consistent with his litany of social gaucheries, which include pawing Eikenberry (with whom he is smitten). Michael J. Pollard wanders in and out of the story’s edges hawking the paper on the street — and as usual with the actor, we immediately think, “Not a single brain cell is left.” There’s a lot of camaraderie here, a lot of musical beds, a lot of dust-ups and a lot of drinking — the last after work in a more intimate saloon setting or when Southside Johnny and the Asbury Jukes are appearing at a booze-soaked event (it was a nice touch having them appear here).

Silver was coming off Hester Street, which turned out to be a surprise indie hit after few had given it much commercial encouragement (the reviews were good, too), followed by the very well received TV movie Bernice Bobs Her Hair. You can see from Between the Lines that she didn’t do very much with the camera, but she had a rapport with actors, and it was no puny feat getting this level of ensemble work out of a large and largely untested cast. In Lines’ case, she had even worked a short while at the Village Voice, though it was likely Barron’s experiences at the Boston Phoenix and The Real Paper that shaped the narrative (his screenplay already existed before Silver became involved). There’s about a 15-minute bonus interview with Silver on this Blu-ray that isn’t too revealing, but she does come off as one to whom actors would respond. Favorably.

I realize that some of the characters here are full of themselves and when, like everyone else, they’re looking out for old No. 1 while trying to convince themselves they’re not. This puts off certain viewers, but these were the times, and maybe they still are, as young turks juggle for position in a cutthroat position profession — one that, in this case, pays Goldblum $75 a week (plus all the review-copy vinyls that he can unload at the local used record store).

Of all the actors at the time, I was probably most taken with Heard because Goldblum, who’s just as good here, was at least a slightly known quantity (the hot temper he displayed in his Greenwich Village characterization is gone here, but the tics and neuroses remain intact). Heard would soon parlay this movie into Silver’s follow-up Chilly Scenes of Winter and his great Cutter’s Way performance — an over-the-top achievement that totally pulls off its flamboyance when it could have been a haunch of ham. Both are cult movies that rated Blu-ray releases from Twilight Time, and (with Lines) formed a very promising triumvirate for the actor. Later, when I had to pick lint off my socks watching Heard in Home Alone, my popcorn congealed.