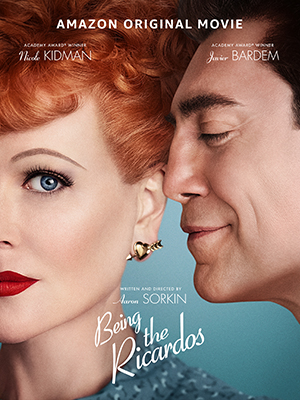 Leave it to Aaron Sorkin to chronicle the life of Lucille Ball and Desi Arnaz while making “I Love Lucy” from the perspective of the show’s writers.

The entertaining docudrama Being the Ricardos provides a thorough look at the challenges of television production, focusing on a week behind the scenes of the iconic sitcom while Ball tries to save her marriage while dealing with the potential fallout of being accused of being a communist in the 1950s.

Writer-director Sorkin uses a number of narrative tricks at his disposal, beginning with a framing device involving older versions of the show’s three primary writers — Jess Oppenheimer, Madelyn Pugh and Bob Carroll — played by John Rubinstein, Linda Lavin and Ronny Cox, respectively as if being interviewed for a documentary (Tony Hale, Alia Shawkat and Jake Lacy play the younger versions).

The trio end up telling the story of how Lucy (Nicole Kidman) met Desi (Javier Bardem), navigated the tricky waters of show business, got married and created an iconic show that changed the course of TV history.

During the week in question, tensions run a bit higher than usual. As Ball wonders if her career is about to end over HUAC, she argues with the writers over jokes in the show and deals with rumors of Desi’s womanizing. Meanwhile, the couple also wants to turn her impending pregnancy into a storyline, much to the chagrin of network executives at CBS, as Desi appeals to the show’s sponsor to force the issue.

It’s a lot to process in two hours, but Sorkin keeps it pithy with his trademark crisp dialogue, and the performances are terrific throughout. One clever conceit involves peering into Ball’s comedy mind as she imagines a scene coming to fruition, allowing Sorkin to re-create moments from the sitcom in black-and-white.

Unlike with his previous film, The Trial of the Chicago 7, which was dripping in political commentary, Sorkin manages to keep any overt politicization of the subject matter at bay, hinting at the debate between the theories and realities of communism without delving too deeply into the particulars (though in interviews he likens the hysteria to modern cancel culture). He also isn’t so uncouth as to point out how “I Love Lucy” was sponsored by the Philip Morris tobacco company, and both Lucy and Desi would eventually die of illnesses known to be exacerbated by smoking.

The particulars of the story are mostly accurate in the aggregate, though in typical Hollywood fashion Sorkin has changed some details and rearranged the timeline for dramatic effect. For instance, the episode shown being produced, “Fred and Ethel Fight,” was the 22nd episode of the series, not the 37th as stated in the movie. And the communist controversy came about a year later, apparently around episode 68, months after Little Ricky was born. The episode in particular was likely chosen because its topic paralleled Lucy and Desi’s own marital troubles in the film, and provided a nice insight into Lucy’s penchant for physical comedy.

On another note, the casting as Lavin to play the older Pugh is a nice touch, as Pugh and Carroll were among the executive producers of the sitcom “Alice” that starred Lavin.