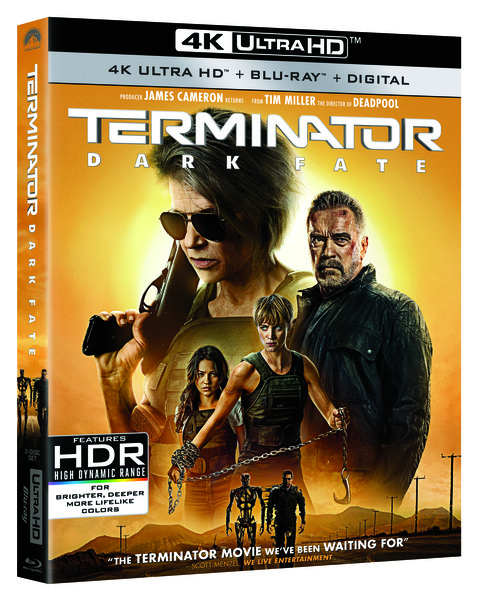 The “Terminator” films at this point are not so much as a franchise as they are a premise that keeps rebooting itself.

The 1984 original and its 1991 sequel, Terminator 2: Judgment Day, otherwise known as the ones directed and co-written by James Cameron, are considered classics in the sci-fi and action genres, and exist well enough on their own as a self-contained duology ruminating about the nature of fate and the increasingly complicated role machines play in our lives.

Without Cameron guiding the franchise, subsequent sequels fell back on the same basic premise of robots from the future hunting a younger version of someone whose destiny is to lead the resistance against the artificial intelligence Skynet and its machines taking over the world. The only wrinkle was in crafting the action scenes and finding new variations of the Terminators hunting the main heroes — usually Sarah Connor and her son, the future resistance leader John — and finding a way to fit the original Terminator, Arnold Schwarzenegger, into the plot.

Needless to say, with each installment, fans became less enthused about revisiting the war against Skynet.

While 2003’s Terminator 3: Rise of the Machines was the most similar to its predecessors in terms of setting, at least 2009’s Terminator: Salvation pushed the mythology forward by setting the story after the nuclear armageddon of judgment day. But after negative audience feedback for that installment, producers tried a reboot in 2015 with Terminator Genisys, which again tried to put a new spin on the core premise, without much luck (though it did get a thumbs up from Cameron).

Counting the “Terminator: The Sarah Connor Chronicles” TV series, Terminator: Dark Fate marks the fourth attempt at a direct sequel to Terminator 2 (with Salvation fitting in more or less as a direct sequel to Terminator 3). Key to the latest installment is the return of Cameron to an active role in the franchise as a producer and co-writer, while directing duties were handled by Tim Miller, who established his action bonafides with 2016’s Deadpool. And Linda Hamilton, the original Sarah Connor from the first two films, would return as well.

But after all the hoopla, the end result just seems like another pointless reboot, plugging in a new set of characters into the roles of the original film and adding some overt political subtext.

The film posits that, with the foundation for Skynet eliminated in Terminator 2, that a new AI will eventually cause judgment day and wage war against humanity. So a new Terminator (Gabriel Luna) is sent to kill the young version of the new resistance leader, Dani (Natalia Reyes), while the future resistance sends a protector for Dani, named Grace (Mackenzie Davis).

Meanwhile, remnants from the averted Skynet future, such as an older Sarah Connor (Hamilton) are still around too, and find a way to join the effort to protect Dani.

Luna’s new Rev-9 model is an interesting design, able to separate his liquid skin into a second killing machine for maximum carnage. The fights and action sequences are pretty good. But the main curiosity factor of the film is just seeing how the writers decided to redefine the franchise’s mythology.

Dark Fate has plenty of interesting ideas about the franchise’s mythology, but so did all of the other sequels that it overwrote. By now there are enough alternate versions of what happens next that fans can take or leave them as they please (with most probably preferring the TV show’s take on it).

In another sign of the times, a sizeable portion of the film’s bonus materials are available as digital exclusives, meaning disc collectors will have to access them through the redemption code included with the Blu-ray. (Buyers of the standalone DVD will get nothing beyond the film itself in paltry standard-def.)

The Blu-ray still contains a hefty amount of extras, particularly a couple of behind-the-scenes featurettes that run more than 50 minutes in total.

The 20-minute “A Legend Reforged” deals with creating the new story, while the 33-minute “World Builders” focuses on the production of the film. While these are pretty standard for these kinds of videos, they should satisfy fans of the film looking for more production details.

The Blu-ray also includes nine-minutes of deleted scenes, some of which are alternate set-ups of what’s in the film and others that add a few insights into what happens to the characters.

Two more videos focus on specific sequences: an eight-and-a-half-minute look at the making of the climactic dam fight, and a two-and-a-half-minute visual effects breakdown of creating one of the film’s fictional vehicles.

The digital version includes a full-length commentary with director Miller and editor Julian Clarke, which hints at some of the publicized story disagreements Miller had with Cameron and other members of the production. Millers introduction to and commentary on the deleted scenes also is a digital exclusive.

Rounding out the extras on the digital side are a five-minute featurette about creating a new Terminator villain, a two-and-a-half-minute vignette comparing the various robotic characters of the franchise, and animated pre-visualizations of three of the film’s action sequences.