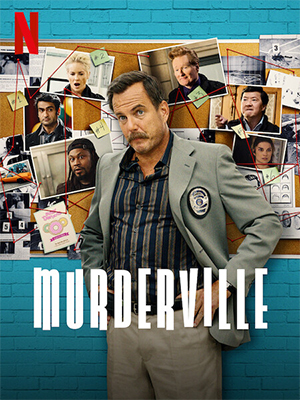 The hilarious new comedy series “Murderville” offers a spoof of police procedurals with a twist. Each episode, homicide detective Terry Seattle (Will Arnett) takes on a new trainee partner in the form of a celebrity guest star playing themselves. The catch is, the celebrities haven’t been given a script to let them know what’s going on, forcing them to improvise their way through the scenes, leading up to them choosing which of the episode’s three suspects they think is the killer.

Think of it as “Law & Order” meets “Police Squad” with touches of “Whose Line Is It Anyway?” and one of those murder mystery party games, as the premise, inspired by the British TV series “Murder in Successville,” serves as an excuse to subject the celebrity guest to humiliating scenarios while distracting them from trying to notice clues.

For instance, the first episode ensnares Conan O’Brien in a situation in which he has to keep eating a sloppy joe even as Arnett keeps pouring hot sauce on it. Another set-up sees former NFL star Marshawn Lynch pretending to be the mirror image of a suspect he looks nothing like because the two-way mirror in the interrogation room is missing.

There are also running gags that flow through all six of the episodes, giving sharp-eyed viewers plenty to appreciate. Arnett shines as the detective at the center of it all, acting as ringleader to egg on the celebrities while guiding them through each case, not to mention the audience, who can play along at home.

You know you’re dealing with an elevated level of silliness when one of the secondary objectives seems to be trying to make the actor playing the corpse crack up (and a couple of times it almost works). Even the skilled performers guest starring or playing suspects aren’t immune to breaking from time to time, which just contributes to the dumb fun.