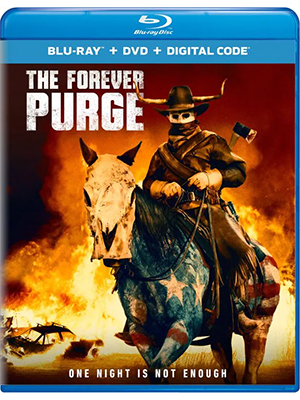 The fifth entry in the “Purge” franchise, The Forever Purge is the kind of horror movie that results when filmmakers who don’t seem to understand economics want to shove in a message about economics.

But that’s pretty par for the course for this franchise, which depicts a dystopian future in which a fascist American government makes all crime legal for one night a year in order for the population to cleanse itself of aggression.

The Forever Purge picks up following the events of 2016’s The Purge: Election Year, a politically naïve film about a challenger to the system running for president. By the end of it, she wins and the Purge is ostensibly outlawed. So, as the beginning of this film explains, eight years later the country votes the fascists back into power and they reinstate the Purge, which off the bat is a pretty clunky way to continue the storyline of the franchise.

That’s because the plot of The Forever Purge doesn’t take place during Purge night as the other films do, but in the aftermath of a Purge, as an underground movement of disgruntled citizens decides the Purge should be permanent. So it could just as easily stemmed from the attempt to ban the Purge from the last film. But that’s not the approach employed by screenwriter (and series creator) James DeMonaco.

So the film begins with a pair of migrants fleeing the Mexican cartels and settling as laborers in Texas. One of them ends up working for a rancher (Josh Lucas) who is depicted as slightly racist. After Purge night comes and goes, the Purger movement rises up, killing anyone they perceive as un-American, or who they just don’t like. One of them is a white ranch-hand whose dissatisfaction with his lot in life leads him to equate being paid a salary and a bonus to slave labor for some reason, so he tries to take over the ranch, leading to a bloody confrontation that ends with the rancher family and the migrants heading south to seek refuge in Mexico, evading racist purge groups along the way.

The attempts at social commentary by trying to put a twist on current political issues seems clever on the surface, but the allegory doesn’t hold up to actual real-world scrutiny. It’s ultimately just an excuse for some relatively effective sequences of action violence anyway. But the premise is wearing real thin at this point.

The Blu-ray offers a few skimpy extras, with an eight-minute behind-the-scenes featurette, a two-minute featurette about the Purger costumes, the film’s trailer, a mundane minute-and-a-half deleted scene, and storyboards for an expanded opening sequence.