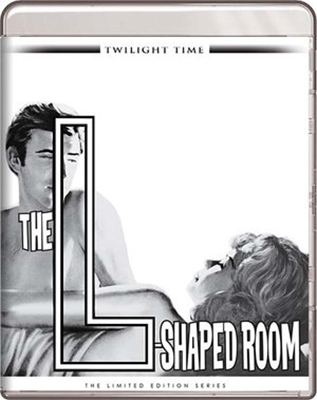 Buoyed by surprise lead casting that worked at the time and still does, The L-Shaped Room fairly seamlessly smooshes one of those British kitchen-sink dramas that a lot of critics diss (but I rather like) with an unwed mother saga — the latter a sub-genre that once meant more than its ilk does now. Just four years after Leslie Caron’s toast-of-Paree Gigi had enabled co-star Maurice Chevalier to (in Bob Hope’s words) “put champagne on his Wheaties,” this sometimes grubby slice of life got its 1962 London opening — a whiplashing chain of events necessitated by musicals quickly going into a commercial fade, and Caron learning the hard way that co-starring in an Arthur Freed production of Jack Kerouac’s The Subterraneans wasn’t the answer. (What was wrong with people? I’d pay to see George Peppard plunked into a beatnik culture any day of the week.)

Room was a Caron career antidote that led an actress I’ve always loved to her second Oscar nomination, a BAFTA win and (if you like) a Golden Globe, oddly followed by a severe career decline. So, OK, this chronology is a little pat because this Room’s arthouse acclaim was sandwiched between 1961’s Fanny (a huge popular hit that was also overrated by some of the lesser critics) and 1964’s Father Goose (another hit and also the last “real” Cary Grant movie before swan song Walk, Don’t Run put him into a kind of gramps mode). But the assertion is basically true, probably not helped by some scandalous off-camera publicity involving Warren Beatty, who had to pay court costs in her divorce. And by arthouse success, I mean that seeing Room in the U.S. outside of a major city amid its ’63 U.S. opening likely necessitated a drive of some duration to some lonely prestige theater on the outskirts of town. And this was at a time when flight attendant fluff like Dolores Hart and Pamela Tiffin in Come Fly With Me could still rate a downtown opening in a 2,800-seater.

That’s my American-release context, which is nothing compared to having the bonus track commentators here being Nick Redman, Lem Dobbs and Julie Kirgo to fill in a lot of my ignorance gaps — with the first two, in particular, serving as been-there geographical guides to the setting’s then-and-now leap in real estate prices (pairing this with 1999’s Notting Hill would be the kind of double bill I used to float during my youthful film programming days). Caron moves into the title flat that’s located up some creaky stairs — a kind of architectural afterthought though a dwelling of choice of the bedbugs that provide co-scripter/director Bryan Forbes (adapting frequent kiddie writer Lynne Redi Banks’s novel) with his single most memorable shot. This said, and no doubt challenged by cramped working quarters, cinematographer Douglas Slocombe does a not unexpected stellar job of turning the room (and the flat in general) into movie characters; you have to love a guy who managed to adapt his camera to a smorgasbord of The Lavender Hill Mob, Circus of Horrors, Boom!, The Music Lovers, Travels With My Aunt and two of the Indiana Jones adventures. He also shot those Kris Kristofferson/Sarah Miles sex scenes in The Sailor Who Fell From Grace From the Sea, which is probably how he lived to be 103.

Caron, who looks splendid here despite her character’s emotional turmoil, is a French woman who’s steadfastly determined to have her baby when a surprising number of people (including a cash-sniffing upscale doctor played by Emlyn Williams in a juicy cameo) want her to abort. Kirgo quotes Caron as saying that making the character French probably helped the film get by with the British censors of the day because … well, everyone knew about those French women, right? (No wonder England was so rocked by the Profumo scandal.) The flat thin walls’ possibly bored tenants contribute to Room becoming the ultimate in nosy-neighbors cinema — a situation that evolves (though not with me, it wouldn’t) into an ultimate communal situation. A prostitute, a forgotten music hall performer, an almost certainly gay West India musician, and a novelist who isn’t making sales: This is the array that must survive a landlady from hell who is not part of the community.

Brock Peters plays the musician and delivers, with an impressive accent, a performance directly on the heels of his role as the railroaded defendant in To Kill a Mockingbird. The role of Caron’s new-neighbor lover, who can’t abide her pregnancy by another (not exactly an odd-man-out attitude half-a-century ago) goes to Tom Bell, whose career is said to have been folkloric-ly derailed by his drunkenly heckling a not unamused Prince Phillip at an awards ceremony. Maybe this really was the reason, but despite Bell’s later success as a character actor (particularly on TV’s “Prime Suspect”), his looks were on the sinister side for a lead, and I suspect he was the type women liked a lot more than guys. On the other hand, guys dig Ernest Borgnine, which is what makes the world go around.

Of its era ilk, I think I prefer Tony Richardson’s A Taste of Honey, which opened in Britain about a year earlier, but still, I have to say that this recent viewing of Room after a long layoff won me over despite the movie’s weighty running time (126 minutes) and a general so-so attitude toward most of Bryan Forbes’s directorial output in general, including the much praised Séance on a Wet Afternoon. The wrap-up scenes are strong, the final shot is enticingly ambiguous, and the Caron-Slocombe combo is winner. Not too much later, the cinematographer reteamed with the actress in the ever-deadly Arthur Hiller’s Promise Her Anything, a farce she made with Beatty. It was really awful — as I recall, a 55-year-old Bob Cummings has mother issues in it – but as a curio, it might offer a compensation or two these days.