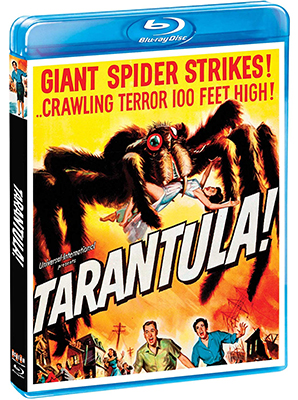 My ex-wife says that 1955’s Tarantula is the ’50s mutation pic that most freaked her out as a child, and I suspect that my reaction would have been the same had I been able to catch it in in early ’56. That’s when it played my main neighborhood theater following a downtown run that had paired this desert chiller with the William Campbell-Mamie Van Doren-Keenan Wynn biker pic Running Wild, a double bill that appeals to me more than anything I’ve seen on my local multiplex marquee this year. (For one thing, I never miss any Keenan Wynn movie about hot wheels.) Unfortunately, my parents wanted me to do something comparably dull instead — I think it was something really unreasonable like eating Sunday dinner with the family — and the huge argument that ensued means that I didn’t catch one of the most essential creature features until college.

And more than a decade after its first release, Tarantula was still very good of its kind, as Parents magazine used to say in its monthly movie guide: compact (though even at 80 minutes, there’s a little too much yakking); helped by a casting mix that works; and the visual advantage of watching the jumbo title “thing” stalking the wide-open desert (I don’t think the clutter of a metropolitan setting would have worked as well). And, let’s face it: On a warm-and-fuzzy level, tarantulas may well have the “fuzzy” part covered — but in my experience, the only guys who have tarantulas as pets are pot dealers who also have 500 pet mice in their apartments when someone goes over to buy a lid. In other words, it’s not like 1957’s The Deadly Mantis, in which you can say: “everyone loves praying mantes — most of the time.” Conversely, nobody’s going to lobby against dead tarantulas, even though they’re generally harmless to humans unless agitated.

But not this one. Baby boomer favorite Leo G. Carroll, who in ’55 had just completed his network run with the title role in TV’s “Topper” before years of syndication, plays a scientist who works in secrecy way out in Nowhere, Ariz. In a large isolated home that Universal-International recycled from 1948’s Tap Roots and other studio predecessors, caged creatures lounge around behind glass enclosures between injections of serum that Professor Carroll is guinea-pigging them with; it’s part of an experiment he hopes will cure world food shortages. As a result, these animals grow at an amazing rate, with the bunnies evolving on a dime from teensy little things into a casting call for Night of the Lepus. So you can imagine the terror that ensues (to say nothing of the amount of livestock remains on the ground) once a similarly affected tarantula skedaddles — the damned thing moves surprisingly fast — out of the lab.

This escape occurs due to an unfortunate side effect when the serum is injected into humans: acromegaly (which the script manages to call by a slightly different name) — a distorter of hands, feet and sometimes facial features. One of these victims — and as with a similarly afflicted and similarly dying colleague we see in the first scene, he’s now uuuuuuuggggg-ly — decides as a final gesture to attack Carroll in the lab and inject him with the same stuff, which results in a physical altercation that busts open cages and, well, you get the idea. I have to believe that for 1955 Baby Boomers, the continuing sight of Cosmo Topper with his face falling off (with each shot of him worse than the last) was as scary as the giant tarantula, which, make no mistake, is imposing.

Clint Eastwood had four big-screen bit parts in his ’55 debut year (including one in Lady Godiva, which my prurient 8-year-old side really wanted to see at the time, and not because Grant Withers was also in it). In this case, Clint’s face is obscured behind Air Force goggles once the nearly-beaten desert authorities have no other recourse other than to say, “Bring on the napalm.” But the main leads are (as a local doc) John Agar, whose earnestness I always found appealing — plus U-I contract babe and future lifelong Eastwood pal Mara Corday as another ’50s scientist’s assistant who could just as well be one of that decade’s Playboy Playmates, which, matter of fact, Corday was in real life. According to the bonus commentary by Tom Weaver, who wrote the sci-fi movie book (actually, he wrote many more than one), poor Agar signed with the studio in hopes of getting more substantial parts than playing opposite Cleo Moore in Bait over at Columbia for Hugo Haas. Whereupon, U-I put Agar in Revenge of the Creature (coincidentally Eastwood’s debut), then let him sit around for a year before putting him in Tarantula. (As for The Mole People, which followed later, I didn’t even like that one when I was a kid.)

The commentary, which can be funny and is shared with David Schecter and Robert J. Kiss, is a new one on me: actors are utilized to deliver quotes from Weaver’s many interviews of sci-fi movie principals, including some of the talents here. Schecter does a riff of 10 or 11 minutes on how Tarantula’s effective score here was largely patched together from previous pictures, while Weaver offers persuasive evidence that the movie’s cult director, Jack Arnold, was apparently one of those guys who claimed credit for everything (though if I’d been Jack, I’d have blamed Bob Hope’s A Global Affair on someone else).

The estimable Gary Tooze of DVD Beaver recently knocked this Blu-ray’s look on the website, and anyone hoping that the movie will look as sharp as the recent Val Lewton RKO’s from Scream Factory should forget it. My own view is that the 1.33:1 copy on Koch Media’s Reg. B import looks the best (but that means 1.33 for a December 1955 release) and that the 1.78 alternative on the same disc is too grainy for my eye. That leaves this new 1.85 Scream Factory version somewhere in the middle — a nice width-to-height rendering but otherwise only on the high side of just OK.

And speaking of Inside Baseball (or maybe Inside Insects), the movie’s title appears as Tarantula on the screen — sans exclamation point — but as Tarantula! nearly everywhere else these days, including on the package art and menu here. As one who assisted Leonard Maltin on his Movie Guide dating back to when The Osmonds were charting, I can tell you that Len spent half of his adult life trying to sort out this kind of twisted arcania, which more than once must have made him ask, “I went to NYU for this?” It’s the kind of thing that makes you wish you’d pursued a more reputable profession in life — like, say, mad scientist. Though truth to tell, Carroll’s character really isn’t mad here but one who simply fell in with the wrong crowd, as in once diminutive tarantulas who eventually necessitate the employment of bombing crews.

Mike’s Picks: ‘A Face in the Crowd’ and ‘Tarantula’