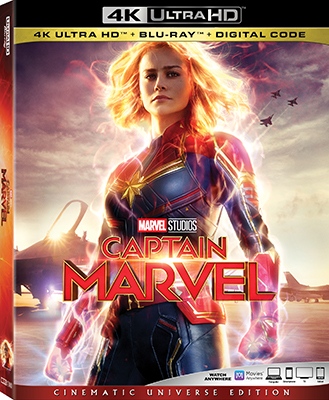 The 21st film in the Marvel Cinematic Universe, Captain Marvel, is the most entertaining backstory for a pager you’re likely to see.

First and foremost, the film answers the question of who Nick Fury was contacting in the post-credits sequence of Avengers: Infinity War as half of all life in the universe was turning to dust as a result of Thanos’ snap. And in doing so, it provides the introduction of a key hero who would otherwise be considered little more than a deus ex machina in Avengers: Endgame.

The film serves as a prequel for the rest of the MCU (aside from the World War II setting of Captain America: The First Avenger), and its 1995 setting is a big indicator of what direction the humor and soundtrack are going to go.

It starts off as something of a space opera, shades of “Guardians of the Galaxy,” focused an alien task force that includes the warrior Vers (Brie Larson). The team is helping the Kree Empire (the blue aliens seen in other MCU movies and the TV series “Agents of S.H.I.E.L.D.”) fight a war against the shape-shifting Skrulls.

When a mission goes awry and Vers finds herself captured by the Skrulls, she escapes to Earth, where the Skrulls are searching for a mysterious power source.

After encountering S.H.I.E.L.D., she learns she is really Carol Danvers, a human test pilot believed killed several years before in a crash that in actuality was an attack that left her with superpowers and no memory of her previous self.

Carol’s abilities in the film have been frequently compared with a hero from” rival DC Comics: Superman, which is interesting considering that Danvers” is also the last name of Supergirl’s human alter ego. She also wouldn’t even be the first Captain Marvel to be compared with Superman — that would be the Fawcett Comics Captain Marvel from the 1940s that was eventually acquired by DC Comics and renamed Shazam to avoid confusion with the Marvel Comics version of the character. (That the Shazam! movie would finally hit screens just a month after Captain Marvel is one of cinema’s great coincidences.)

Captain Marvel attempts to fiddle with the tropes of the superhero origin story by using a flashback mystery structure, which is a nice exercise in technique even if Vers’ true identity will only be a mystery to anyone who hasn’t seen the film’s trailers beforehand or has any passing familiarity with her comic book history (or has already seen the movie, of course). There are other surprises to be had and some subversion of expectations, which balances it all out.

It’s a perfectly entertaining adventure that doesn’t rise beyond more than mid-level Marvel at best (which in the greater scheme of things is still pretty good). It has fun filling in some pieces of the larger Marvel franchise, though it could use a lesson in subtlety.

The film is at its strongest when it involves Carol on her mission, be it as part of the Kree Starforce, or paired with the younger version of Nick Fury (Samuel L. Jackson, effectively de-aged by the magic of computers) in a kind of buddy cop movie.

The film is ultimately a piece of bright, cheery fun that will light up HD TV screens with warm colors and the kind of razzle-dazzle we’ve come to expect from Marvel’s cosmic adventures.

This was also the first MCU movie released after the death of Marvel legend Stan Lee, and contains one of his best cameos in the franchise, calling back to what he was actually up to in 1995. That’s in addition to the touching opening tribute that presents the Marvel Studios logo with video from his various cameos over the years.

These are the only tributes to Stan Lee on the Blu-ray, though, as there isn’t a separate bonus feature devoted to it, aside from a mention in the commentary track from co-directors Anna Boden and Ryan Fleck.

Otherwise, the commentary is a fairly typical back-and-forth in which they discuss various behind-the-scenes challenges, story points and their enjoyment of working with certain actors.

The movie also comes with an optional two-minute introduction by the directors.

The Blu-ray includes a two-minute gag reel, nine minutes of deleted and alternate scenes, and six behind-the-scenes featurettes that total about 24 minutes of viewing time.

The seven-minute “Becoming a Super Hero” and three-and-a-half-minute “Big Hero Moment” deal with Larson taking on the role and the significance of having a superhero movie fronted by a female lead, while “The Dream Team” is a three-minute video about the directors.

“The Skrulls and the Kree” offers a three-and-a-half-minute primer on the primary conflict of the film.

The three-and-a-half-minute “The Origin of Nick Fury” gets MCU stars from other movies to discuss his character’s appearance over the years.

Finally, there’s “Hiss-sterical Cat-titude,” a tongue-in-cheek three-and-a-half-minute propaganda video about the cat named Goose that serves a central role in the story.

The digital copy of the film includes a seven-minute visual effects featurette, and a five-minute exploration about crafting an action scene for a Marvel movie. There are also galleries of set photos and concept art.

Vudu has an additional digital exclusive, a three-minute vignette called “Her Story,” which seems like a promotional piece cobbled together from video used in the other featurettes.