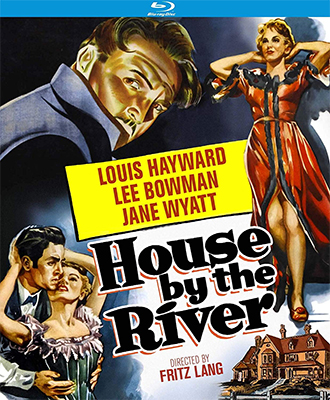 When a gothic late 19th-century murder melodrama is titled House by the River, it can really get off on the wrong foot if the river itself doesn’t look very sinister when it predictably provides the backdrop to the opening credits. The turbulent Big Drink seen here definitely fills the bill, and its table-setting creepiness gives strong suggestion that extra care was given to what would be pegged by many observers as a ‘B’-picture or, at best, a shaky-‘A.’

River was, in fact distributed in 1950 by what was then an increasingly shaky Republic Pictures — albeit during that decade when Roy Rogers’ professional homestead additionally found room for such prestige filmmakers as Ben Hecht and Charles MacArthur, Frank Borzage, Orson Welles, John Ford, Nicholas Ray and —  if you let them on the list by virtues of their best pictures — William Dieterle (who’d soon resume his career in Germany) and an end-of-the-line Frank Lloyd. The luridly twisted River, which Republic picked up from indie Fidelity Pictures, added Fritz Lang to the list, and truth to tell, I’d have to rate it with my favorites of his Hollywood films. This said, it does loom somewhere between being underrated and even unseen by some Lang aficionados, at least those of a certain age whose cinema appreciation flourished at a time when it was difficult to see. For comparably older viewers, this wasn’t a problem because the Republic package played on TV incessantly from the late-’50s into the mid-’60s, and I myself saw the film for the first time at NYU in 1970 or ’71, courtesy of Prof. William K. Everson’s personal print.

Back to the moody river, though I hate to bring Pat Boone into the picture, on which practically sits the upscale house of a failed writer (Louis Hayward, a long way from Monte Cristo). Given his sales quotient, he  probably wouldn’t be able to afford his residence were it not for a brother (Lee Bowman) who gave up some of his share of their father’s inheritance money to make it happen. This latter straight-arrow, who limps from some unspecified affliction, is in love with his brother’s wife (Jane Wyatt), which may have been the motivation. But to quote Dizzy Dean in his baseball announcing days when a portly relief pitcher (Fred Gladding, I think) walked to the round from the bullpen, both siblings seem to be “eatin’ regular.” And, even more germane to the film, are able to employ servants in a movie that’s very much about class distinction.

We get this point right away when Hayward’s female servant (Dorothy Patrick, who, at the time, was top-billed in several Republic ‘B’s opposite Robert Rockwell) asks to use the upstairs bathroom because the plumber hasn’t arrived to fix her own quarters. Hayward is a dissipated leering type, and besides, Wyatt is away so the master agrees all too willingly; this is a guy we soon see getting turned on by hearing the young woman’s bath water floating down inside the drain on the house’s exterior drain (oh, Fritz, you devil). Hayward makes an unwanted crude advance when her bathing is completed, silences her screams when a nosy neighbor is momentarily struck by the commotion and then discovers he has strangled assault victim. In a reluctant decision that comes to fill Bowman with escalating regret on a near-daily basis, he agrees to help his brother dispose of the body in, naturally, the river.

Thanks to either a Lang brainstorm or more likely a good set-up in a script by Mel Dinelli that sometimes recalls that consistently deft screenwriter’s contribution to Robert Siodmak’s The Spiral Staircase, we’ve seen from the get-go that a dead horse (or some kind of livestock; my eyes couldn’t specify) has a pesky way of rising to the top of its own watery grave. And then floating. What this portends doesn’t make either of the assailants’ days — and probably not local real estate agents, either — but the far more sympathetic Bowman truly bears a brunt that escalates. He’s deeply offended when everyone around, partly in response to Hayward-planted fake evidence, assumes the murdered maid was a tramp who stole jewelry and before blowing town. And he’s all-out horrified to see his brother suddenly professing be a better writer now that he’s experienced the dark side, or whatever they called it in those days. The whole situation is further taking an emotional toll on Wyatt, and this Bowman hates most of all.

At this point, we’re veering on spoiler territory, so let’s change the subject to some scattershot observations. One is that after a brief mid-’40s run where Lang briefly became something of a a box office director with Ministry of Fear, The Woman in the Window and Scarlet Street bang-bang-bang, he stumbled badly when the apparently very expensive Secret Beyond the Door lost a lot of money. It’s been too long since I’ve read Patrick McGilligan’s extraordinary standout Lang biography, but I suspect the previous bust had something to do with the fact that River was the director’s first film in three years amid a long period when he’d been working pretty regularly. Working with a cast that some River critics knock as being less than top-of-the-line, he either coaxed or (given his rep) more likely badgered his three leads into surprisingly impassioned performances. (Worth noting: Before TV’s “Father Knows Best” established her permanent image once an for all, Wyatt shifted gears the same year as River when she played a scheming murderess — and quite convincingly — in The Man Who Cheated Himself.)

Another thought is that I like the way Lang and art director Boris Leven (though early in his career, Leven eventually found his place among the biggest of the Big Time) make the house an actual character in the movie. This is especially impressive because we basically only see the hallway/stairs where the murder takes place and an upstairs bedroom or two. But one’s imagination intriguingly takes over when it comes to speculating about the the rest of the layout and the human dynamics that must have been playing out with the household principals.

Another point, just because I’d like to shoehorn this in, is the degree to which Jody Gilbert nails her role as Bowman’s cook and overall servant — a woman who’s both a royal pain and sympathetic and probably in love with an employer who grows increasingly testy with her. Gilbert, who was fatally injured  three decades later in a road accident, was an overweight comic actress, and the words “Fat,” “Plumb” and “Stout” were sometimes parts of the official character names she was assigned, which, more often that not, were in comic roles, which I suppose is one way male-female dynamics have improved in the modern era. Given a chance to play it straighter, Gilbert’s is an example of our watching a someone about to deliver what one assumes will be a competently functional interpretation and then watching the performer go all the way with it.

Australian academic Alexandra Heller-Nicholas gives Gilbert a shout-out as well, but my biggest take-away from listening to her supplementary disc commentary is gleaning the tension between what she’s  saying (frequently mighty starchy) and her sometimes chummy, ingratiating delivery (though, far as I’m concerned, she could have gone even heavier on the “chummy”). She’s a fan of the film while conceding that others (even some Lang fanciers) are not, but most of all, she’s rightly consumed by a point she talks about a lot at the beginning and returns to later.

It hasn’t anything to do with what the filmmakers did but Patrick’s murder has been described by some as a seduction gone wrong — a tone-deaf misreading by what I assume have to be male critics. If you note the look on her face in her final moments and Hayward’s own frenzied mania, it isn’t much of a stretch to concede that at least by by comparison, Baby, It’s Cold Outside really is closer to a seductive cat than not. Hayward is such a head-shaker of a transparent creep here that Heller-Nicholas can’t avoid re-emphasizing the point from time to time throughout, depending on whatever transgression against civility he’s perpetrating at the moment. And for much of the time, in apt melodramatic fashion, he has the town — and what pathetically passes for its literati — snookered.