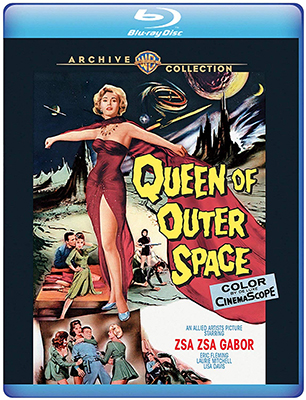 OK — Twilight Time has John Ford’s take on Edwin O’Connor’s The Last Hurrah (one of my favorite books of childhood); Arrow has Terence Davies’ Distant Voices, Still Lives; and I’m late on Criterion’s rumble-in-the-jungle The Naked Prey, that Cornel Wilde Chopin alternative that I really wanted to do as a substitute for exercise. So here I am instead giving time and effort to Queen of Outer Space — the color camp fest in which a CinemaScope cast of comely starlets channel Venusian lips of Hazel Bishop into a script with all the intellectual heft of Joey Bishop. Aside, of course, from the movie’s female villains, who hate all men and thus care little about Hazel’s smear-proof lipstick and other comely concerns.

And yet even this plot-propelling contrivance isn’t precisely true because we see Queen’s chief heavy (the recently deceased Laurie Mitchell, sharing a bonus commentary with horror-pic scholar/interviewer Tom Weaver) not infrequently putting the moves on male lead and future star of TV’s “Rawhide,” Eric Fleming. Or she would if that mask Mitchell mysteriously wears over her face wouldn’t keep getting in the way — not that she’s fares any better (ooo-ick) when she removes it. Besides, Fleming only has eyes for lead Zsa Zsa Gabor, who falls for him despite the fact that he’s only an astronaut and thus likely lacks the money to bankroll her future alimony payments. Still, it’s a good gig for him — and would certainly beat being out on the “Rawhide” trail with the cooking of Paul Brinegar’s “Wishbone” character (tonight’s main course: heifer gravy).

It’s only due to a point of personal privilege with Zsa Zsa that I’m even writing on this movie — though, for her part, let it be said that she gets almost as much mileage here out of pronouncing “vimmen” for “women” as George Hamilton does when speaking of protecting and defending “the pipples” in Zorro, the Gay Blade. Linguistics aside, the privilege part is due to the fact that in March 1958 — and it’s a long story — I appeared on national television with the first and only Hungarian cougar to promote this picture, which must have been a case of a publicist working overtime because Allied Artists didn’t put it in theaters until September. Oddly, Gabor did have a March release in theaters during our meet-up. But for some reason, she had no apparent interest in touting (other than a mere mention, as I recall) Paramount’s concurrent Country Music Holiday, co-starring Ferlin Husky and Rocky Graziano (boy, did I bust a gut finally getting a copy of that one for the archives). More interesting than the picture was the thought that with either one of them, she could have made mighty interesting children.

Gabor and I were never intimate enough for me simply to call her by a single “Zsa” — but she was decent enough, plying me with cashews and grapefruit juice (now, that’ll put a gastrologist on a retainer) in her Plaza Hotel suite. On our joint TV appearance, she actually informed viewers that she was a fan of mine — something I thought of later during an episode of “The Judy Garland Show” when Judy claimed that she had “always wanted to work with” George Maharis. Gabor also tried to explain, for national consumption, the plot of Queen, which even then didn’t make much sense to me. She did, though, wear a great low-cut dress (non-virginal white) that led to some great production stills and a few jollies for my accompanying father. Of course, he had previously walked into the wrong pre-broadcast dressing room to find Barbara Britton in her underwear, preparing to do (apologies to Hazel Bishop) a Revlon commercial. All this and a recent Ohio State win in the Rose Bowl, too.

OK, back to Venus. A spaceship gets knocked off course and onto a planet of splendrous outdoor vistas, movie-starlet babes, interior decoration just made for Don Draper love trysts and a giant spider that director Edward Bernds and the Allied Artists vault recycled from 1956’s World Without End, in which the hunk-tom was supplied by Hugh Marlowe. Here, it’s Fleming; Dave Willock (one of the most familiar comical-sidekick faces); Patrick Waltz as a philanderer who chooses space travel over an on-the-ground Joi Lansing (Section 8 material right there); and — as the professor/authority figure — Paul Birch, who looks a little too much as if he hits the sauce to convince as the brains of the outfit.

Gabor, who’s not the title character, is both a guy enthusiast and key to an insurgency against Queen Mitchell, who employs what looks like some sort of dime store mechanism — I think I saw it on display once in my local Murphy’s Department Store, not too far from the bin with Alfred Apaka’s Greatest Hits Vol. 2 — to zap her enemies into vapor. This is serious business but mostly a distraction to a cast of heteros who just want to get it on, a situation abetted by an unlikely fashion shop that must be somewhere on the path to the spider cave. I also kept wondering where the nearest dry cleaner was — though, in fairness, this is something that always puzzles me in good movies, too (as in, say, Japan’s Gate of Hell).

Commentator Weaver has access to copies (from Bernds) of the production call sheets, an example of “pull” if there ever was one. He determines that as much as a fifth of the picture must have been shot the very first day — opening up the possibility that maybe Gabor had to ankle it (or, well, limo it) to the rushes of Country Music Holiday just to make sure Ferlin Husky wasn’t upstaging her. As he and good-sport Mitchell note, one of the movie’s problems is that no one can figure out if this is an intended romp with dead spots or a straight picture that went terribly wrong. In any event, it has the kind of saturated color I like to see in fluffy older movies, though Roger Deakins, it’ll never be. On the commentary, Weaver mentions that he’ll be asking Mitchell late about having worked with Huntz Hall, but unless I was sleeping (possible), this never happens.

In any event, Allied Artists treated Queen as an ‘A’-picture (and, for them, it probably was), one that actually rated a prestigious downtown booking in my fair capital city — billed above Legion of the Doomed with Bill Williams and Dawn Richard (a real looker, onetime Playmate of the Month and eventually ex-wife of producer David Wolper, not that this did anything to screech-halt the picture’s box office doom). To be sure, I doubt if this pairing did much against week two of a rival theater’s run of Gigi (which took five months to reach my town, enough to tell you everything about Midwest moviegoing back then). But it probably held its own against the John Wayne-John Huston boo-boo The Barbarian and the Geisha — which was no Geisha Boy, which came out two months later, let me tell you.