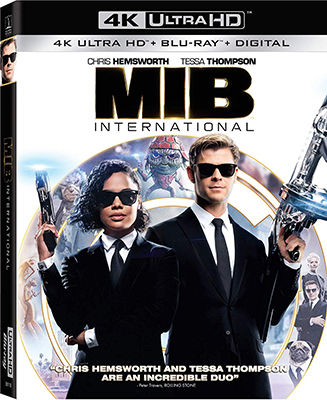 The fourth film in the “Men in Black” franchise was supposed to freshen up the franchise with a new cast and creative team. But old habits are hard to break, and Men in Black: International ends up coming across as a bland rehash of the formula established by the original film.

It’s not the fault of the cast, who are doing their best to milk laughs out of the material. And the film looks great, with all the weird aliens, slick gadgets and kooky visual effects one would expect from a “Men in Black” movie.

The issue is that the “MIB” movies don’t seem concerned with the kind of worldbuilding needed to create a viable sci-fi mythology, like establishing a set of rules for how things work. Instead they rely on familiar gags and situations that hint at a bigger picture but ultimately don’t yield many consequences for the characters or the fictional organization they work for that is tasked with secretly defending the Earth from intergalactic threats.

The fourth film kicks off with not one but two flashbacks. In one, a young girl witnesses her parents’ memories erased by MIB agents, causing her to become obsessed with learning the secrets of the organization, which she finally stumbles upon decades later and earns a chance to prove herself as an agent. Played as an adult by Tessa Thompson, she’s dubbed agent M and assigned to the London branch, where MIB boss O (Emma Thompson) thinks something’s not quite right with the operation.

The London branch is run by High T (Liam Neeson), who a few years earlier (in the other flashback) joined agent H (Chris Hemsworth) in fighting off an alien invader named The Hive, and once you hear why they’re called that it pretty much telegraphs every potential plot twist in the movie.

Anyway, back in the present, M and H work together to investigate a potential new threat from the Hive, involving a pair of alien assassins who are looking for a superweapon on Earth, taking them on an adventure through exotic locales in Europe, Africa and the Middle East.

Tessa Thompson and Chris Hemsworth work well together, as we’ve seen in the “Thor” and “Avengers” movies. But their pairing here seems more an attempt to coast off that buzz than come up with fresh ideas.

The shift to London, the globetrotting story and addition of Hemsworth as a suave secret agent are undoubtedly meant to give the film a “James Bond meets Men in Black” vibe, which might have been better served if the film embraced the tone such a mashup would imply, rather than lazily resorting to the familiar buddy cop vs. aliens boilerplate we’ve seen before.

The bonus materials on the Blu-ray, DVD and digital versions mostly reinforce the notion that this is merely the next iteration of a familiar franchise, with a half-hour of behind-the-scenes featurettes about the cast, stunts, production design and gadgets showing how “MIB” is being taken to the next level. But nostalgia isn’t left behind, as there’s a three-minute video recapping the earlier movies.

There’s also a bizarre three-minute NBA crossover video in which M and H discover a number of top NBA superstars are actually aliens. While these were produced as promos for the NBA playoffs around the time of the film’s theatrical run, without that context they play more as a prequel for a “Space Jam”-type movie.

Exclusive to the Blu-ray are 11-and-a-half minutes of deleted scenes, some of which shed new light on elements in the movie. There’s also a pair of amusing faux commercials for “MIB”-style products, one for a consumer-approved memory-wiping neuralyzer, and another for a parody ancestry website for people to discover their alien heritage. However, the Alien-cestry.com URL just leads back to the Sony Pictures home page.