The fiscal largess from Disney’s $90 million Shang-Chi and the Legend of the Ten Rings opening weekend box office continues to spread throughout the Hollywood food chain.

Shang-Chi opened to a reported $90 million for its domestic opening weekend Sept. 3-6. This is approximately triple the previous Labor Day opening weekend record of $30.6 million set by Rob Zombie’s Halloween in 2007.

“For two overarching reasons, this Labor Day weekend in the United States has been an important milestone for AMC as we steadily work to generate a recovery for our business,” CEO Adam Aron said in a statement. “This is the very first weekend that our attendance numbers were ahead of those of the same weekend pre-pandemic, since we closed our theaters in March of 2020.”

Digital service FandangoNow is running a Labor Day Yard Sale with 800 movies available to own at sale prices.

It’s the biggest sale of the summer for Fandango’s transactional video-on-demand service. 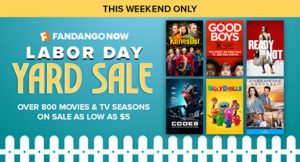 The sale includes family-friendly titles such as The Peanuts Movie, Paddington, Charlie and the Chocolate Factory, Ice Age, Rio and Charlotte’s Web, plus films such as Best in Show, The Color Purple and Happy Gilmore available for purchase at $5 each.

The sale also includes 4K Ulta HD titles, such as Bad Boys for Life, Jaws, E.T., Jumanji, Bloodshot, Top Gun and Knives Out, available to own at $10 each.