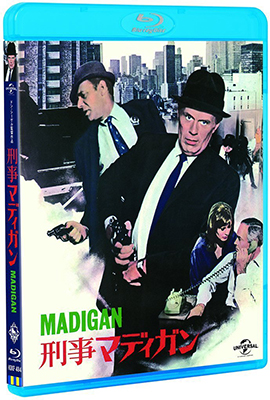 As a rare Universal Pictures standout from a roughly five-year era when the studio was primarily palming off glorified TV movies as theatrical features, Madigan is precisely the kind of cult classic (a stupidly overhyped term, but this is the real deal) that may or may not ever get a domestic Blu-ray release. As we wait perhaps futilely, here’s a fairly handsome but not-cheap Japanese alternative I just discovered (without extras, but this is a satisfying presentation) for a Techniscope cop-drama once revered by so many Don Siegel cultists. Among these, for a little personal nostalgia, were the band of about eight NYU graduate Cinemas Studies colleagues that I once joined on a dream 42nd Street grindhouse trek to see Madigan double-billed with Rio Bravo as a vendor occasionally came down the aisle hawing Eskimo pies (ambience, ambience but also nirvana, nirvana).

By this time, I had seen the picture in Ohio upon its first-run release two or so years previously — not expecting much, though I was already a huge Siegel fan by virtue of having already experienced The Big Steal, Riot in Cell Block 11, Invasion of the Body Snatchers, the now very tough-to-see Baby Face Nelson, The Lineup, Hell Is for Heroes and The Killers — though with (just naming preferred ones here) The Duel at Silver River, Flaming Star, then imminent Coogan’s Bluff, Two Mules for Sister Sara, The Beguiled, Dirty Harry, Charley Varrick, The Shootist and Escape from Alcatraz yet to go. Given that many or of these genre specialties were made just above or even below the radar over three decades, I always feel like having a cosmetic surgeon supply me with 50 new eyebrows so that I can raise them every time some young turk with two movies under his belt is touted as the latest Second Coming.

In any event, Madigan — which traces the botch of a routine Brooklyn police pickup into a tragic and unexpectedly moving finale — does have an unmistakable ’60s TV-movie feel — down to its sometimes risibly over-orchestrated Don Costa score that has you half-waiting for the next Right Guard commercial. On one level, the music arguably puts a ceiling on how much one can go to the mat praising the rest — and yet the pace is blistering (Andrew Sarris’s original review gave a huge huzzah to the editing), and there’s a lot of sharp dialogue in a script co-credited to Andrew Polonsky, who was finally returned from nearly two decades of political Blacklisting. As Sarris noted as well, there’s also Russell Meaty widescreen photography that expertly matches New York locations with studio shots, which leads to a side-issue question. Leaving aside the Hitchcocks and To Kill a Mockingbird, was there any Universal release of ambition in this era — not that there were many — that Metty didn’t shoot? I mean, we’re talking nine Douglas Sirks, Touch of Evil, Spartacus, The War Lord and Thoroughly Modern Millie just off the top of my head (though I did have to look up the number of Sirks, which spanned Magnificent Obsession to Imitation of Life).

Ultimately, the overriding boost here comes courtesy of the cast, led by Richard Widmark (as street detective Dan Madigan) and prickly police commissioner Henry Fonda — who, in De Niro-Pacino Heat fashion, don’t share any scenes until a payoff late in the narrative. Set during a Fri-Sat-Sun that coincides with a major policeman’s ball, Widmark/Madigan’s exhausting angst and certainly personal humiliation get launched when he and partner Harry Guardino attempt to arrest a lowlife (Steve Ihnat) in a fleabag apartment outside their jurisdiction. The first awful thing is that they let him get away with Widmark’s police gun after being distracted by this creep’s naked bedmate. The second is that Ihnat, turns out, is no presumed routine punk but a psychopath wanted for murder and almost as malevolent as the hood Widmark played (in a much lower key) in his Kiss of Death debut. Ihnat, by the way, is the actor-turned-director who died a few years later at 37 of a heart attack — probably best known for this movie and as the guy whose internal organs get turned into lasagna by Marlon Brando’s fists during the climactic scene of Arthur Penn’s The Chase.

Cold cookie Fonda (aping what his kids say he was like in real life) hasn’t any use of for department mavericks, nor for anything that doesn’t go by the book — aside from an adulterous affair he’s conducting that complicates his moderately pious pronouncements a bit. An usual feature here is the amount of time devoted to the politicking and PR finessing that’s inevitably part of any commissioner’s job, and the story classically cuts back and forth between Fonda calming civic waters and Widmark/Guardino interacting with a slew of comically shady characters while looking for leads.

The casting here is what reviewers used to call “reliable” — with supporting roles of cops, constituents, snitches and the like going to James Whitmore, Susan Clark, Michael Dunn, Forbidden Planet’s Warren Stevens, Don Stroud (someone I later saw, to my amazement, on “Lifestyles of the Rich and Famous”); Sheree North (used memorably again by Siegel in Charley Varrick), Raymond St. Jacques, Invaders From Mars’s Bert Freed, Harry Bellaver, Frank Marth, Lloyd Gough (another onetime Blacklistee), Dragnet regular Virginia Gregg and Ramar of the Jungle’s Ray Montgomery — who, as a kid, always looked right to me in a pith helmet. What a treasure trove.

What makes the movie something special for a genre picture is its rather raw-for-the-day portrayal of Widmark’s domestic life with a physically attractive but tightly wired spouse (Inger Stevens) who has clearly had it with her husband’s chosen career and hates being stuck without many friends in the neighborhood where they live. With Stevens’ knockout blondeness, you can almost imagine her as a precursor to January Jones’s testy spouse Betty from “Mad Men” — except that Stevens is blue-collar-ish in what is clearly a them-versus-us movie, is more sympathetic (though her complaining may even be more incessant) and loves her husband without any non-job qualifications, which isn’t initially evident until the movie takes some very interesting byways in its final quarter. They’re also very grown-up byways treated with unusual honesty for the day.

Her overriding love is convincing because you always get the sense that Madigan is at heart a really good guy by the way other people (the commissioner excepted) regard him and by the way he treats his street contacts, which includes acts of charity (though he isn’t above accepting a free meal at a restaurant or a complimentary Christmas turkey). We’d probably get a stronger sense of his virtues were the character not under such heavy professional/domestic pressure and functioning with almost no sleep — but to me, this is still Widmark’s most likable performance and my favorite of his career. Which is heartening because at this point, the actor’s box office standing had, like Fonda’s to a lesser case, started to fade a bit — though never due to anything we saw on the screen given decent material. Nobody much beyond cop-pic junkies and the cultist hard core actually saw this picture at the time, but at least one network brainstormer at NBC must have been watching. The movie later led to a “Madigan” TV series with its star returning — very short-lived, though its ratings weren’t all that bad. I wish the episodes would make their way to DVD, at least.