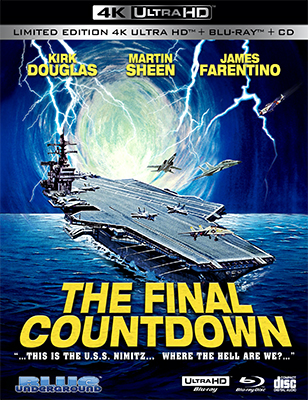 The premise of The Final Countdown teases an irresistible bit of speculative fiction: What if a single modern U.S. aircraft carrier was available to defend Pearl Harbor against the Japanese fleet?

While modern in this scenario refers to 1980, when the movie first came out, and military tech has evolved a bit since then, those advancements aren’t as much of a radical change as the difference between pre-World War II hardware and what was available during filming. In fact, the aircraft carrier at the center of the story, the U.S.S. Nimitz, is still in service as of 2021.

To put the time gap into perspective, it would be the temporal equivalent of a newer carrier such as the U.S.S. Ronald Reagan going back in time from now to 1982, when Reagan was actually president. But the foundational shift from analog to digital makes the 1980s to today feel much closer than the 1940s feels to the ’80s. Which is all a way of saying the central hook of the story still holds up as an intriguing plot twist more than 40 years later.

Despite a plot involving time travel and naval warfare, The Final Countdown really isn’t that complicated of a movie. In essence, the aircraft carrier Nimitz, while engaged in training exercises, encounters a rift in space-time that sends it back to 1941. The crew investigates their situation, figures out what happened, and decides that no matter the time, their duty is to defend the United States, so they prepare to ambush the Japanese fleet with modern jet fighters before it can attack Pearl Harbor.

The primary fun in the film is watching the characters try to grasp the implications of the premise. The main debate is between the ship’s captain, played by Kirk Douglas, who must decide what the crew’s duty is despite being displaced by time, and a civilian observer played by Martin Sheen, who wonders if it’s possible to change history, and if so, what the ramifications would be. James Farentino plays the ship’s air wing commander, who also happens to be an amateur historian and expert on the Pearl Harbor attack.

The captain’s assessments hit a bit of a wrinkle when a fighter patrol encounters a couple of Japanese scout planes firing on a yacht in order to wipe out any potential witnesses. The boat’s main passenger turns out to be a U.S. senator (played Charles Durning) who could have become president had history not recorded him having disappeared just before the Pearl Harbor attack. Instead, he’s very much alive and sitting in the infirmary of a ship decades more advanced than the technology he’s familiar with, and he has a lot of questions.

Aside from its place in time travel lore, the film is also mostly known for its authentic depiction of the operations on board a U.S. aircraft carrier, so much so that long stretches of the film are dedicated solely to depicting the processes for launching and maintaining fighter planes, which doesn’t do much to service the story but is catnip for military hardware junkies.

The reason for the authenticity is that the production crew was allowed to film on the actual U.S.S. Nimitz and record real military planes in action. In fact, some of the real naval aviators who worked on the film speculate in a bonus featurette that the Navy agreed to participate because they could use the final film as a recruitment video.

The primary fighter on display here is the F-14 Tomcat, six years before they were similarly featured in Top Gun. The appearance of the F-14 in both films is a primary reason the craft is among the greatest fighter planes from a pop culture perspective, and watching a couple of them dogfight with Japanese Zeros is a pure delight.

The Final Countdown has enjoyed a few notable home video releases before, arriving on DVD in 2004 and on Blu-ray in 2008. But Blue Underground’s new 4K edition is the ultimate edition of the film, offering a nice-looking new restoration from the original 35mm camera negative, plus all previously available bonus material and then some.

First up is a commentary track carried over from 2004 with the film’s cinematographer, Victor J. Kemper, who discusses the process of shooting the film on board an active aircraft carrier with Blue Underground representative David Gregory.

There are also two featurettes, also from 2004, both of which are upscaled to 4K. “Lloyd Kaufman Goes Hollywood” is a 14-minute interview with Kaufman, the legendary Troma Entertainment founder who worked as a producer on the film, while the 31-minute “Starring the Jolly Rogers” is a fascinating retrospective featuring some of the real pilots who flew the planes in the film.

There are also galleries for the film’s promotional artwork, trailers and TV spots, the latter narrated by the voice of Optimus Prime himself, Peter Cullen.

The 4K combo pack includes the film on both a 4K disc and a regular Blu-ray, and the extras are fully available on both. In addition, the set doesn’t just repack the old 2008 Blu-ray, but a newly engineered one using the same restoration of the film as the 4K disc.

The set also includes the D-Box motion control from the original Blu-ray, and the “Zero Pilot Journal” essay that was available as text on the DVD release has been reprinted as a physical booklet insert.

Another added treat is a CD soundtrack of the film’s musical score by John Scott. This is the same CD that is available on its own through Screen Archives, and consists of 23 tracks running 54 minutes total.

Rounding out the set is reversable box art and a slipcase with a lenticular cover depicting the Nimitz disappearing into the rift.

All in all, this is a must have for fans of the film, the U.S. Navy and time travel stories in general.