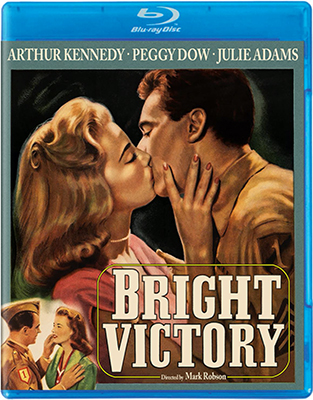 While sweeping for mines during the North African Campaign of 1943, a German sniper’s bullet pierced Sergeant Larry Nevins’ (Arthur Kennedy) steel helmet, destroying his optic nerve and causing permanent blindness. One year after Marlon Brando made his screen debut as a paralyzed vet in Fred Zinneman’s The Men, Universal-International swapped out one disability for another in Bright Victory, a grueling tale of rehabilitation that’s as uplifting as it is unsentimental. The bold, adult manner in which it is imparted brings an air of frank immediacy that remains potent to this day. The Hays Office frowned upon suicide as a plot device, but war had a way of softening the censor board’s thinking. An enlisted man walks past the bathroom just in time to stop Nevins from taking a razor to his wrist. Even Will Hays couldn’t deny a fraught soldier their right to contemplate taking their life as an alternative to sightlessness, particularly when it advanced the plot.

Remember the fallacious manner in which the “Dream Factory” dealt with the Depression? Chorines dressed as coinage attempted to mollify impoverished audiences by singing and tapping their way through “We’re in the Money.” There was a brief period following World War II where Hollywood appeared poised to follow a similar line of tranquilizing illusion, but audiences would have none of it. The war, and the news of Hitler’s inferno that came with it, brought audiences closer in touch with a darker side of reality, a shade heretofore hidden from view due in large part to the governing pedagogues at the PCA.

America’s sudden thirst for authenticity demanded a change in tone as well as locale. More and more, casts and crews left the relative comfort of the soundstage in favor of filming in more precarious actual locales. Whenever possible, director Mark Robson chose to film in practical locations and existing light. (Bright Victory was shot in and around Valley Forge Army Hospital in Phoenixville, Pennsylvania.) That’s where matchless lensman William Daniels came in handy. He began his long and illustrious career riding focus for punctilious silent screen autocrat, Eric von Strohiem (Greed, The Merry Widow). Before the thirties rang out, MGM’s prize star-shooter had earned a reputation throughout Tinsel Town as, “Garbo’s favorite cinematographer.” The years prior to Bright Victory found Daniels leading the charge towards realism: Brute Force, The Naked City and Deported burst through studio gates, his deep focus lens aimed on a collision course with the struggles of the modern world.

From initial waves of hopelessness to breaking the news of his blindness to loved ones and learning how to navigate his cane as a “bumper,” not a “feeler,” screenwriter Robert Buckner, working from a novel by Bayard Kendrick, guides us through every intricate step of Nevin’s renewal. (The uninterrupted two-block trek through the grounds that deposits us at Nevins’ “obstacle perception” test was a standout.) As confidence grew, the sergeant soon became a vital part of the hospital’s ebb and flow. That includes venturing from the relatively safe confines and hopping the bus to downtown Phoenixville. It’s here that he meets the film’s main love interest, Judy Green (Peggy Dow). Dow had previously starred opposite James Stewart in Harvey. After a brief, but versatile three-year stint under contract to Universal-International, she quit the business to raise a family.

Upon his return home, the soldier was greeted with patronization and flat-out rejection. Locals bow and scrape to meet Nevins’ every need, but it soon becomes clear that he is not the only one having difficulty accepting his homecoming. His future in-laws are none too pleased at the thought of having their daughter marry a man who in their dim-sighted estimation will never be able to make his way through life without needing a shoulder to lean on. This was the film that made Arthur Kennedy a star. Whether cast as a western villain, an everyman doing his best to prop the weight of the world on his back, or oiling his way through Some Came Running as Sinatra’s greasy brother, Kennedy raised the bar for American character actors.

The movies generally painted a character with a handicap — particularly one incurred while serving their country — in shades of spotless angelic, but not so Nevins. He has a fiancée back home, Chris Paterson (Julie Adams), but that didn’t stop him from coming on hot and heavy to Judy. Their first dance together and already he’s putting on the moves, tightening his grip as would a prehensile osteopath, before praising her figure. A blind racist sees no color and Nevins’ intolerant side is on display as early as the flight to Valley Forge. No sooner did Nevins learn that the closest his plane-mate Joe Morgan (James Edwards) came to a country club was through the “colored only” servant’s entrance, than he cuts the conversation short, requesting to speak with a nurse. At the hospital, the two become fast friends until the day Nevins lets slip that he never knew they “let n*****s in the ward” to which Joe replies, “I’ve been here nearly seven months.” Nevins didn’t say “Negro” or “colored” but the full-blown epithet behind the asterisks. To this day it remains shocking to hear a character from the Golden Age, a war hero we’ve been encouraged to stand firmly behind no less, utter the slur.

According to Ellen Scott’s Regulating “N*****”: Racial Offense, African American Activists, and the MPPDA, (1928–1961), a provision to the PCA’s list of “don’t and be carefuls” stated that “willful offense to any nation, race, or creed … ended up on the cutting-room floor.” Scott concluded, “The PCA eventually passed the film with the blind veteran’s dramatically framed epithet intact. And (Code overlord Joseph) Breen said nothing about ‘darky’ in the song ‘Take Me Back to Old Virginny’ on the soundtrack.” It’s one thing had Nevins’ racist outburst been cut short with an apology and a fade out, never to be mentioned again. But the script won’t settle for anything less than having Nevins confront his demons. Hate begins at home and listening to his mother (Nana Bryant) express concern over “what the war has done to our Negroes” proves too much to tolerate. Rather than tell mom off, dad (Will Geer) deposits her at home and father and son head to the local watering hole to commiserate over boilermakers and unfiltered cigarettes.

A good rule of thumb is one coincidence per picture, and hopefully it lands no later than the 10-minute mark. In this case, the coincidence sends us packing with a smile on our faces. But given the subject matter and the period, there was no better place to position it than right before the curtain shot.