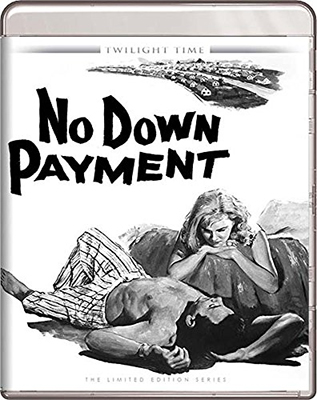 A time-capsule movie that also captures the members of its large cast at interesting career junctures, No Down Payment is based on a John McPartland novel that used to stare at me regularly from the library shelves, daring me to take it out when I knew the librarian would shoot my fifth-grade-or-so self one of those “who do you think you are?” frowns. Its characters, divided into a quartet of couples just getting started after one war or another interrupted their youths, live in a homogenous California development full of “starter” homes — wondering if they’ll ever move beyond their current fortune or if this start is also the end. They drink a lot, flirt a lot, and sometimes (a syndrome that seems to be on the upswing and getting out of hand) push these habits too far. So, what: the librarian thought I was going to read John R. Tunis and Freddy the Pig forever, even if Freddy remains a deity in my life?

The always socially conscious Martin Ritt directed, and not too far removed from the Blacklist: Payment was, in fact, just his second feature. The first was onetime flop d’estime Edge of the City, which I’ve always want to like more than I do — given its (for the day) grown-up subject matter and potent Poitier-Cassavetes casting dynamics, but which, in fact, is pretty heavy-handed. This one, though, I kind of like in that slick, Jerry Wald kind of big-studio way — and in this case, I mean slick as more than even a backhanded compliment, given that the combined casting, production values and subject matter of Wald’s productions were usually seductive marquee magnets with a keen eye on the current Zeitgeist even when they turned out to be unsuccessful. Payment, too, was grown-up for the time; when it played first-run at my downtown Loew’s Ohio, the Loew’s Broad was playing Mr. Rock and Roll with Alan Freed and Chuck Berry, while the RKO Palace was actually trying to meet its monthly mortgage nut with Richard Denning and Mara Corday in The Black Scorpion (which, coincidentally, Warner Archive just brought out on Blu-ray).

Though James Wong Howe gave Ritt a humungous cosmetic assist when he photographed Hud on his way to a cinematography Oscar, Ritt never had much of a visual style — though his pacing was usually strong, and he was often marvelous with actors. Probably my No. 1 revelation re-looking at Payment for the first time in years (and never in a print this crisp) is how good Tony Randall is as an alcoholic used car salesman who isn’t above gouging financially humble customers with shady finance companies who like to charge the kind of 38% interest rates that Michael Cohen might float if he had an auto loan business (think a desk, lamp and half-empty jar of instant Maxwell House) about a block from the lot. Randall’s character is desperate, and the actor memorably conveys his multiple dimensions, while his wife (Sheree North) suffers and pro-cons the ramifications of leaving him.

Payment’s studio (Fox) had kept North in the wings mostly as substitute casting for Marilyn Monroe whenever the latter indulged her exasperating work habits, but North was actually better than that. Her career was on the downswing, with Randall’s slightly on the up — though except for his incomparable work as the perfect foil for Rock Hudson and Doris Day, he wasn’t the easiest big-screen actor to cast, Doctor Lao’s seven faces notwithstanding. Jeffrey Hunter plays this residential unit’s college-grad techie, and I could never figure out how his career lost so much of its momentum right after he was so great in The Searchers (though John Wayne is so titanic that Hunter’s contribution is still overlooked). Patricia Owens, who plays Hunter’s proper but dangerously flirty spouse who gets in over her head, never caught on despite being more than adequate here — possibly because she seemed bit chilly or maybe because being the female lead in The Fly was no one’s idea of a career-maker. Cast as a good-old-girl boozer is Joanne Woodward, who was definitely on the upswing, with her Three Faces of Eve Oscar winner about a month from release. As her husband, Cameron Mitchell has one of the best roles from a screen career that wasn’t much of a grabber: a Tennessean who was the kind of war hero with Japanese souvenirs all over the garage but is now all too conscious of his educational shortcomings. This leaves Pat Hingle, in the most sympathetic role of his limited screen career, as an appliance store proprietor liked by all (which is a problem) and Barbara Rush as his wife.

Rush, too, is suffering — though it’s true that she was an actress who probably ran the premier unhappy-spouse franchise of any screen peer at the time. Maybe “frustrated” is the better word re the character here, and even this isn’t due to any shortcomings on her husband’s part beyond his resistance to church attendance (Hingle knows hypocrisy when he sees it) and would rather attain spiritual sustenance by washing his car. As a member of the town council, Hingle keeps getting leaned on to help solve other people’s problems, and it’s a treadmill that affects his home life — though it’s more a case of sheer volume than a disinclination to help in individual cases. One of these involves Mitchell, and when the situation goes as south as the latter’s formative geographical region, the movie turns ugly and melodramatic (albeit more dainty in presentation than that of the not dissimilar domestic sexual attack in Hud from a time when the screen was a little more liberated).

With The Bridge on the River Kwai, Paths of Glory, Sweet Smell of Success, 12 Angry Men and A Face in the Crowd pacing the top, I’m always amazed to see how underrated an English-language movie year 1957 still is (my favorite list would even go much, much deeper than this, even before we get to foreign releases). As a result, Payment isn’t exactly an undiscovered world-beater or even the year’s best Wald production (I’d go with Peyton Place or An Affair to Remember). But it is rather undiscovered on a lesser but respectable level and holds up remarkably well: conveying claustrophobia without paying for it via storytelling monotony, in part because it knows when to occasionally transpose the narrative into the community’s bustling business district (which will likely evolve into urban sprawl). Thanks to the kind of nugget that Julie Kirgo always seems to come up with in her Twilight Time liner notes, we learn that David Bowie was apparently a fan of this movie. My normal reaction to this would be, “Well, you never know” — but actually, I learned never to assume anything after once reading, to intense delight, that Bob Dylan loves Johnnie Ray.