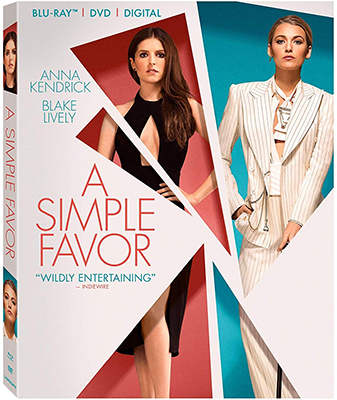 While a movie based on a dark mystery thriller novel might seem like an odd choice for a director known primarily for comedy, Paul Feig is able to deliver an entertaining adaptation of Darcey Bell’s A Simple Favor filled with plenty of twists and turns, driven by a pair of winning performances from his leading ladies, Anna Kendrick and Blake Lively.

A Simple Favor exists in a strange Venn diagram where the dark mystery thriller aspects of Darcey Bell’s source material novel intersect with the broad comedic sensibilities of the film’s director, Paul Feig. The result is an oddly compelling mystery filled with its fair share of plot twists, intrigue and genuine laughs.

Anna Kendrick plays Stephanie, an all-too-sincere mommy blogger who runs a DIY video channel and seems to embody the usual quirks of a Kendrick character. Her worldview is suddenly challenged when she meets the bitchy Emily (Blake Lively), mother of her son’s schoolmate, and the two ladies unexpectedly hit it off over martinis.

One day, Emily asks Stephanie to watch her son after school, and promptly disappears. Days later, Emily’s body seemingly turns up in a lake near her childhood home, setting off all sorts of question about what she was up to. Stephanie, meanwhile, consoles Emily’s husband (Henry Golding), and as they grow closer, they seem to be haunted by Emily, who, it turns out, may not be so dead after all.

In his first directorial effort after the misstep of Ghostbusters: Answer the Call, Feig largely succeeds in maintaining a darkly comic tone throughout, buoyed by a strong cast. Kendrick and Lively give terrific performances as the unlikely friends. Lively in particular dominates the screen in her early scenes, establishing the kind of dominant personality necessary to draw out Stephanie’s meekness and force her to come into her own.

Feig’s intention to make a “fun thriller” ensures the film is never as dark or serious as similar fare such as Gone Girl. If anything, it could almost be seen as a parody of the absurdity of such stories if it weren’t taking itself just seriously enough. Still, in the various bonus materials in which Feig is quite ubiquitous he seems rather flippant about some of his directorial choices, none more so than his alternative to a big, Bollywood-style dance number meant to play during the credits.

The bonus section includes three separate commentaries, and Feig is involved in all of them. The first is the director by himself, relating his own experiences of making the film. The second is Feig with members of the cast, including Kendrick, Lively, Jean Smart (who plays Lively’s mom) and Bashir Salahuddin, who plays a detective. A third commentary finds Feig with screenwriter Jessica Sharzer, producer Jessie Henderson, cinematographer John Schwartzman and costume designer Renée Ehrlich Kalfus.

The filmmaker commentary obviously delves into more of the technical aspects of the production, while the cast commentary is more of a fun discussion about the making of the film, and thus is the more enjoyable of the three.

The disc also includes more than 16 minutes of deleted scenes, including the aforementioned dance scene that was cut for essentially trivializing a story about two strong female characters.