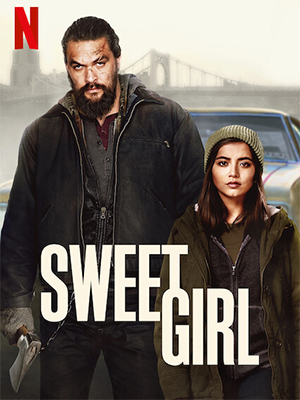 Jason Momoa stars as Ray, a man whose wife is dying of cancer. When her potential treatment is held up by a pharmaceutical company that prevents an affordable generic drug from reaching the market, he threatens the CEO (Justin Bartha) on a call-in talk show.

After his wife dies, Ray eventually hunts down the CEO, and in the aftermath of his attack he is forced to go on the run with his daughter, Rachel (Isabella Merced), who calls the FBI to plead with them that it was self defense.

Complicating matters is a hitman hired to take out anyone who has witnessed evidence of the pharma company’s corruption in bribing smaller companies to keep cheaper drugs off the market so they can increase their profits.

The underpinnings of the story, while topical, are somewhat devoid of subtlety, and come across as manipulative and heavy handed as a result.

Still, the action sequences are effective, and Momoa and Merced are nicely matched as a father-daughter duo. Merced in particular does a nice job as a character who turns out to be not quite what she seems, and is probably one of the only actresses who could pull off the doozy of a plot twist in the middle of the movie without the core story losing whatever credibility it still has once it turns into a fugitive-out-for-revenge actioner.

Like Fight Club, this is a movie that plays much differently on a rewatch, for those willing to sit through it again.