U.S. internet households pay an average of $116 per month for their home internet, including both standalone and bundled internet, according to a new report from Parks Associates, “Quantified Consumer: Fixed vs. Wireless — Consumers’ Shifting Broadband Preferences.”

The report also noted consumer savings of $600 to $1,800 annually should consumers cut their home internet service.

According to the research, there are more than 13.9 million home internet cord-cutters in the United States, a missed revenue opportunity of more than $10.5 billion. Cord-cutters exist for a variety of reasons, according to Parks. Cost and preference for mobility are top triggers, but technical issues and lack of availability also impact their decisions.

“Consumers overall are increasingly concerned with quality over price; however, older households are concerned about costs,” Kristen Hanich, director of research at Parks Associates, said in a statement. “Over 80% of those 65-plus cite cost as a factor for cancelling their home internet, and almost two-thirds of this age group say that they prefer using their mobile internet.”

While there is some interest in canceling home internet services, consumers are increasingly upgrading to Gigabit speeds and adding on additional value-added services. A growing percentage of consumers are likely to be more concerned with the quality of their home internet service over the price, according to Parks. The pandemic, work at home, and increases in video consumption and video conferencing have all put pressure on networks, highlighting the importance of quality internet to consumers. Currently, half of home internet households receive at least one additional non-traditional service from their ISP.

“Consumer intention to upgrade their home internet service remains at an all-time high,” Hanich said. “ISPs must elevate their value proposition or risk losing their customers to competitors.” 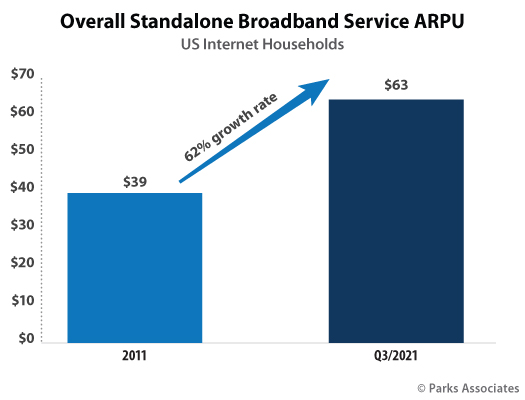 Hundreds of stolen login details for popular OTT services are available every month on the dark web for an average of only $8.81, according to research from digital platform security firm Irdeto.

Dark web marketplaces offer credentials for a range of pay TV and VOD OTT services, meaning legitimate subscribers could have had their accounts compromised and used illegally for a small one-off fee, according to Irdeto. Consumers should be vigilant of any unusual or unfamiliar activity on their account, changing their password regularly, according the company.

“Content theft by pirates has become a full-fledged criminal enterprise, with some providing illegal subscriptions in an attempt to compete with established pay TV operators,” said Mark Mulready, VP, Cybersecurity Services, Irdeto, in a statement.  “Content owners, rights holders, technology and security partners and law enforcement agencies are working hard to combat the threat of piracy. However, consumers must also be vigilant to avoid the risks they may be subject to from illegal content.

“Consumers must think about where they access their content from and ensure that any streaming or downloading is done from legitimate sources. They must also remember that if they use the same password for their OTT services as they do for a number of other online accounts, they could also be opening themselves up to a wider array of exploitative threats.”

The Irdeto Global Consumer Piracy Threat Report looks at pay TV credential availability on the dark web, global piracy hotspots and the market in illicit streaming devices. Other key findings from the report include: