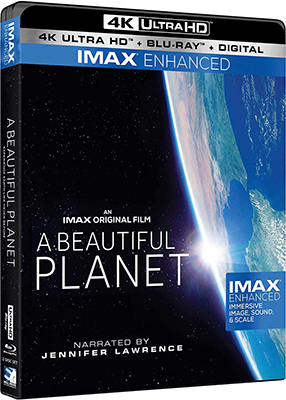 A Beautiful Planet presents not only a portrait of the planet Earth using the breathtaking photography typical of Imax large-format cameras, but is also a terrific glimpse at life aboard the International Space Station, which is not necessarily as glamorous as the simplified depictions of science-fiction.

The breathtaking 2016 Imax documentary A Beautiful Planet was filmed over the course of 15 months by several crews on the International Space Station.

In 45 minutes, the movie presents a pretty good idea of what it’s like to move around the space station and gaze upon the ever-changing landscapes of the Earth as it passes below.

While the title speaks to the amazing photography of the Earth that’s on display, a significant portion of the movie is devoted to glimpses at life on the space station.

In contrast to the typical science-fiction vision of clean, roomy decks, labs and hallways, the International Space Station is a crammed maze of modules Frankensteined out of the technologies of the various participating nations for the past two decade. The corridors are so cluttered that equipment that isn’t stored in its assigned place could disappear for weeks.

The movie depicts the arrival of new crews and the departure of the crews they replace, plus the adjustment to the daily routines of life on board. This includes giving each other haircuts, hours of daily exercise to prevent muscle atrophy in microgravity, and celebrating Christmas by leaving milk and cookies for Santa in the airlock.

The crews feature astronauts from the United States, Russia, Italy, Japan and more, coming together in the spirit of international cooperation and forming a tight bond almost as if they’re away at summer camp.

Actress Jennifer Lawrence most of the general happenings with her narration, but much of the description of station life comes from voiceovers from the astronauts themselves.

One of the common themes is how remarkably different Earth can look depending on the ecosystem, weather and time of day, but all the views are generally stunning. The film covers drought conditions in California, the flashes of lightning in heavily clouded storms, and the glow of city lights at night, which the astronauts remark is often the only visual evidence of civilization when observing the planet from orbit.

The fidelity of the Imax large-format framing is well preserved in the crisp rendering of ultra high-definition, which really pops with the snow-covered whites of the arctic and the vibrant blues of the tropics.

The two-and-a-half-minute “An Extraordinary Vision” is a general behind-the-scenes view with filmmaker interviews. “Imax: Meet the Filmmakers” is a three-minute clip that focuses on training the astronauts to use the special Imax cameras. And “ADP Computing” is a two-and-a-half-minute profile of the visual effects team that enhanced some of the transition shots by creating a VR layout of the universe using actual data of the locations of stars and other stellar phenomena.