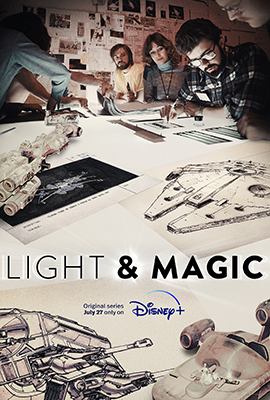 Fans of cinema history are in for a treat with the excellent Disney+ documentary Light & Magic, a thorough look at the creation of Industrial Light & Magic, the premier visual effects company for Hollywood for the past 40 years.

Directed by Lawrence Kasdan, the six-part retrospective is as much a history of visual effects as it is a profile of the talented men and women who created them.

The series begins with the team of innovators assembled to create visual effects for the original Star Wars in the mid 1970s, led by John Dykstra. The first episode details how Dykstra got kind of a raw deal for his efforts, as George Lucas considered him something of a rogue influence on the rest of the team despite his innovative techniques for filming model miniatures, and didn’t invite him back to work on Empire Strikes Back.

By the mid 1980s, ILM branched off to do more than just “Star Wars” movies, resulting in a renaissance of spectacle and visual effects blockbusters.

The documentary features some fascinating interviews with filmmakers and the effects artists themselves as they look back on a remarkable time in the evolution of filmmaking.

Among the notable subplots are the creation of Pixar as an animation studio that spun off from ILM’s computer graphics department. The team that remained to focus on using computers for visual effects were something of a rebel element within the company, pushing the boundaries for what CGI could do until breaking through with Terminator 2 and Jurassic Park.

If there’s a drawback to the presentation it’s that the bulk of the focus, about four of the six episodes, is on the 1980s, while the aftermath of Jurassic Park, from the transition to digital filmmaking to the advancements in CG from Jurassic Park to now, are relegated to just one episode.