Netflix is still consumers’ service for their favorite shows among streaming services, but others are catching up, according to  Hub Entertainment Research’s annual “Conquering Content” survey. 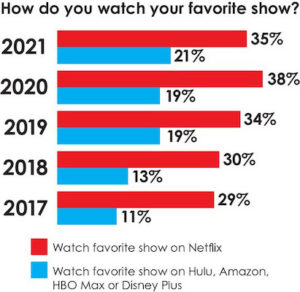 In 2017, Netflix was the undisputed king of originals. Disney + and HBO Max had not yet launched, and only 11% of viewers said their favorite show was on Amazon or Hulu.

In 2021, Netflix still accounted for more viewing of favorites than any other major streaming platform, but its share had fallen, while that of the other “Big 4” had doubled.

“At the end of the day, Netflix still creates more content than anyone else and many still consider it their most indispensable provider,” Jon Giegengack, Hub founder and principal, said in a statement. “But as competitors create more originals (and networks reserve their best shows for their own streaming platforms), the competition for share of mind will get tighter. And that pressure will show up in metrics like lean-in viewing before it appears in subscriber numbers.”