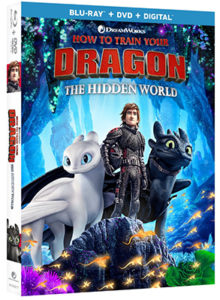 Universal Pictures Home Entertainment will release DreamWorks Animation’s How to Train Your Dragon: The Hidden World digitally April 30, and on Blu-ray, DVD and 4K Ultra HD Blu-ray May 21.

The film earned $146.4 million at the domestic box office.

The home video edition will include two DreamWorks Shorts: Bilby, an adventure to protect a helpless bird in the Australian Outback; and Bird Karma, a 2D-animated tale of a long-legged bird’s journey of blissful joy, inescapable greed and the accidental discovery of the consequences when too much is not enough.

Other extras include feature Commentary with writer-director Dean DeBlois, producer Bradford Lewis and head of character animation Simon Otto; an alternate opening and deleted scenes with intros by DeBlois; and several behind-the-scenes featurettes.

To promote the home video release, Universal has partnered with Facebook and Messenger to debut two exclusive baby dragon Night Lights to train, as well as an in-store augmented reality experience. Disc packages will include a code that fans can use to unlock Night Light they can hatch, train and send on adventures within the Dragon Pets instant game available on Facebook and Messenger. Additionally, participating retailers around the world will unveil in-store displays that trigger an AR adventure bringing Toothless and Light Fury to flight. Both the in-home and in-store experiences are compatible with iOS and Android devices with the latest version of the Facebook and Messenger apps.