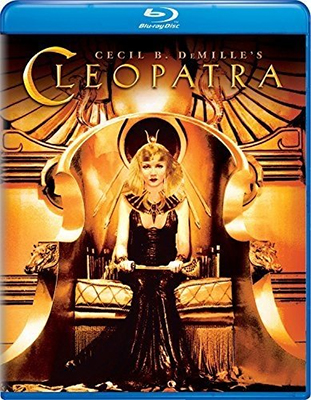 I can remember back in early 1963, when everyone was wondering if the still not released Taylor-Burton Cleopatra would do to 20th Century-Fox what Heaven’s Gate later did to United Artists (which, by way, it almost did). This would have been a serious matter — for one thing, had Fox gone under, we wouldn’t have had the 1970 movie version of Myra Breckinridge — so everyone was grasping for any news. At this point, I fell into Red Buttons doing a standup routine on some variety show, at which point he announced that he had seen the picture. And then he added after the pause for effect: “Claudette Colbert was great.”

By this point, Cecil B. DeMille’s 1934 version had been on TV for four or five years depending on the whims, taste and pocketbook of your local market’s buyer. And having positively eaten up, in theaters, Anne Baxter all but lusting to rip off and then catnap with Chuck Heston’s loincloth in the VistaVision/Technicolor remake of The Ten Commandments, I naturally took to this example of more vintage DeMille and still do. Universal’s new Blu-ray of the Colbert take on the legend — Eureka!’s “Masters of Cinema” collection has already issued the spectacle in a Region ‘B’ version — is one of the most immaculate presentations of a vintage black-and-white movie that I’ve ever seen. So if you whip through its hundred minutes and still find it too pandering to the yahoo masses who made DeMille the most commercially successful director of day (actually, many days), it won’t be the physical quality of this Blu-ray that causes your eyeballs to roll back into your head.

The rap on DeMille’s quarter-century of Paramount talkies — and Cleopatra is another Paramount picture that Universal has owned more for than half-a-century — is a) they’re not especially cinematic and b) that their dialogue is often too tin-eared to serve even a kazoo band. The first is generally true (more on the second later), yet the pacing of even his increasingly long-ish projects is still surprisingly peppy in certain, though not all, cases — and he got attractive performances out of some of the biggest stars in Hollywood, though his casting instincts started going the gonzo route as he got older. Just as we speak, I’m salivating to get a look at the just-out and on-order Region ‘B’ import of DeMille’s 1947 Unconquered, a mid-18th-century epic I seem to recall reading that Martin Scorsese made the cast and crew look at when they were making The Age of Innocence. It’s not every movie where you get to see a Technicolored Gary Cooper and Paulette Goddard as an attractive 1753-or-so couple — in a canoe over one of the Fort Pitt vicinity’s most treacherous waterfalls, albeit with a rear-projection assist.)

Anyway. Offbeat water transport figures prominently in Cleopatra as well, even if Egyptian Cleo’s barge-binge seduction of Rome’s Mark Antony (Henry Wilcoxon) is jumping the narrative gun here because, for one thing, Julius Caesar has to die before this happens. Her second consecutive sexually oriented power grab goes a little beyond the usual boilerplate wiles-and-guiles stuff — complete with marauding tigers on deck who are probably wondering what kind of gig this is, flaming hoops, frolicking virgins (maybe) from central casting and a bunch of minimum-wage types doing the galley-slave rowing bit and wondering if someone will even toss them a fig. According to the pro-job commentary here by writer/historian/F.X. Sweeney, this was the last film released before much-tightened Production Code took effect in mid-1934, so C.B. was just able to take advantage of the No. 1 way to take patrons’ minds off the Depression. Or at least suggest it. Low (or no) moviegoer incomes or not, the movie defied economics to become a monster hit.

Though an easier feat to pull off at 101 minutes vs. the Taylor-Burton’s give-take 250, it’s a credit to the ’34 Cleopatra that it doesn’t lose too much gas with the death of Caesar the way the ’63 version does when Rex Harrison takes all those blades. In both cases, the actor playing Caesar is the movie’s best, and here it’s Warren William — though Sweeney takes note of DeMille’s stated disappointment that the actor’s performance was underrated by critics, even though it’s fully credible and absent of any camp dimension. I also like Henry Wilcoxon as a not overly bright Antony — which leaves Claudette Colbert’s mixed bag and notably American performance in the title role. I just can’t accept Colbert as any kind of seductress, even though she’s a personal favorite who appeared in three best picture Oscar nominees in ’34: this, Imitation of Life and It Happened One Night, which won her the best actress award just before Cleopatra began shooting. But she has the spunk, command and frame-friendly presence that puts over one of the movie’s key points: that Cleo has more on the ball than her bedmates. What’s more, you can’t say she doesn’t know how to put over the Travis Banton costumes, which are among the most iconographic (earning the right to that overused term) of Banton’s great career.

The other rap on DeMille is, getting back to Colbert and a previously mentioned point, is the down-home dialogue and deliveries of even his historical epics set in other lands — as in the way that John Derek and Debra Paget of The Ten Commandments suggest two teens who simply want to make it in the back seat at some mid-’50s drive-in during a showing of, say, Queen Bee. Or, to come in from other direction, Pauline Kael wasn’t wrong when she compared Cleopatra’s dialogue to people talking over the backyard fence or clothesline. But like it or not (and no one says you have to), DeMille did this intentionally to make his movies more accessible to the masses — and, more arguably, even better paced for the great unwashed who shelled out for decades to see them.

Thus, not only does William utter, “You, too, Brutus?” when Caesar’s payoff moment comes — but we actually hear a gossiping partygoer utter, “The wife is always the last to know” when discussing Caesar’s infidelity behind wife Calpurnia’s back. Cast as in the latter role is Gertrude Michael — who, in a bit of unintentionally amazing casting from the same year that only history appreciates, also sang “Sweet Marijuana” with a bunch of sweaty chorus boys in Mitchell Leisen’s Murder at the Vanities. It reminds me that Greer Garson had the Calpurnia role in Joseph Mankiewicz’s 1953 Julius Caesar, and does the mind ever go into overdrive over the concept of Garson taking a flier with the Lessen production number over at MGM in Mrs. Miniver Goes Doobie.

The narrative is tight and keenly modulated between lickety-splitting chariots, political chicanery and effectively languid romancing, though were it not for the movie’s production values/décor so remarkably preserved on this release, I wouldn’t be making as big a deal here, at least for predisposed non-enthusiasts. I haven’t even mentioned that Victor Milner won the cinematography Oscar here against a weak nominee field — not that it couldn’t hold its own against a big-gun lineup — though you have to wonder how Bert Glennon’s work on Sternberg’s The Scarlet Empress (soon to be on Criterion’s Dietrich-Sternberg Blu-ray box) ended up being overlooked. I know the picture was a flop at the time, but come on, people.