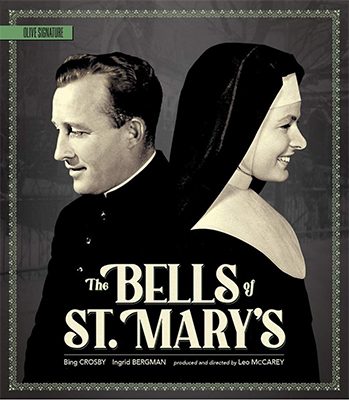 Christmas has arrived early for Old Mikey this year, what with Olive Films’ much appreciated “Signature” upgrade of The Bells of St. Mary’s, a lovely visual rendering that features exactly the right person for its voiceover commentary: Bing Crosby biographer Gary Giddins.

Of course, laying that handle on Giddins and then letting it go at that is a little like suggesting that “White Christmas” was Crosby’s only hit single. But the credit is especially germane here, given that Vol. 2 of Little, Brown and Company’s Giddins-Crosby chronicle (Swinging on a Star: The War Years 1941-46) concludes just a little after Bells became not just its year’s biggest box office hit but the biggest live-action box office hit that RKO ever released. I’m qualifying this achievement just a little because there’s a claim from either Giddins or another bonus commentator here that the studio’s distribution deal with Disney up until 1954 allowed Bambi to take RKO’s all-time No. 1 spot, which is something I didn’t know. But you get the idea: This was more than the studio revenues taken in even by King Kong, or at least it was until the foiled Kong-Fay Wray courtship saga got re-issued to death before RKO went under.

Another hat worn by Giddins is his status as something of the go-to guy for any pointers on director Leo McCarey, something that Criterion was savvy enough to realize when they interviewed the critic/historian for their releases of The Awful Truth and Make Way for Tomorrow, both films released in 1937 and at the apogee of Hollywood in the ’30s. For Bells, McCarey and Crosby re-created the latter’s once-thought-to-be dicey casting as the hip young priest from Paramount’s Going My Way, which had recently swept a slew of 1944 Oscars after becoming the single most popular Hollywood movie of the war years.

Bells wasn’t a sequel but a then very rare prequel that teamed him with the most prominent screen artist who hadn’t won her own ’44 Oscar for GMY. This would be Ingrid Bergman for her performance as the badgered wife who more than anyone put her movie’s title into the now common lexicon as a verb: Gaslight, as directed by George Cukor in a vastly superior screen remake of Patrick Hamilton’s 1938 play. Having spent almost all of her Hollywood career steeped in acting angst, Bergman fought David O. Selznick (who contractually held the keys to her profession destiny) to play the film’s Sister Superior and sparring partner — both with Crosby and an initially inept playground student pugilist in one of the picture’s most memorable scenes. Selznick had a way of compromising his contract players starting around of the time of Bells’ production — less out of mean-spiritedness than from a case of artistic myopia probably exacerbated by Bennies he used as chasers.

There’s one bit in GMY where Crosby sports a St. Louis Browns sweatshirt, which despite ’44 having been the Browns’ real-life one-hit-wonder World Series year (they still didn’t win it), suggests that O’Malley empathizes more than most with human failing. Meanwhile, Bergman’s Sister Mary Benedict takes a more traditionally rigid approach between the beams of light her very being exudes — hence the conflict dramatized with velvet gloves in Dudley Nichols’ script. This tension predominantly manifests itself over a) a young female student who’s a product of what was once viewed as suspect parentage; and b) conflicting attitudes over whether dilapidated St. Mary’s is worth saving — a moot point, perhaps, due to a developer (Henry Travers) who has constructed a modern office building right next door and is on his way to locking up a deal to use the school’s real estate as a parking lot.

McCarey couldn’t have known at the time how film history would play out, but the developer is portrayed with his typical disarming whimsy by Henry Travers, who was still a year way from playing Clarence the Angel in Frank Capra’s It’s a Wonderful Life. But anyone who’s been breathing in the years since (and can make casting associations) will likely sense that he or she won’t have to worry too much. Fortunately, to riff on the Sherman Brothers, the movie avoids employing a warehouse of sugar to make the tough stuff go down. Nichols and McCarey are sly enough to have Travers note, after a rare act of altruism, that it’s “tax-deductible.”

Still, the picture could have gone off the rails were it not for the almost incalculable charm and chemistry between the two leads (this is my favorite Bergman performance) and the equally incalculable auteurist flair McCarey always brought to movies both great and not so good (as with, alas, the ones that found themselves on the upswing later in his career). The famous and certainly oft-quoted line about McCarey came from Jean Renoir when he said that the former understood people better than any other Hollywood director. To this, one might include cats as well because Bells boasts the greatest screen direction of one (and possibly the best in any setting, given that cats really can’t be directed) that I’ve ever seen. As for his direction of the very young children in a Nativity scene that equals the killer one in John Ford’s Donovan’s Reef, McCarey had the touch there as well — though it’s been said that after giving the kids some basic instruction, he left the room as they did their thing with the camera rolling.

Bells’ setting is drab — this school is really rundown — but cinematographer George Barnes goes to town when it comes to lighting the actors and making Bergman look absolutely luminous (Barnes got an Oscar for black-and-white Rebecca and shot some of the era’s most gorgeous Technicolor pictures: later De Mille epics The Spanish Main, The Emperor Waltz, Frenchman’s Creek, the last visual spectaculars when I got to see them in nitrate 35mm prints). This Signature release is much, much improved over the previous Olive release, which looked kind of like a patch job to me. Arrow Films has its own handsome Region B release that’s newly available as well, and I assume it’s from the same source.

Aside from Giddins the Great, who sounds as if he might be battling a cold here, the extras include an array of goodies — all of which I liked — about the film at hand in relation to McCarey (by Steve Massa); an on-screen essay that I had a little trouble navigating on my screen (Abbey Bender); and a discussion of Bells’ prequel/sequel status from effervescent Prof. Emily Carman. She gets more out of the subject than I expected, due to the paucity of single big-screen follow-ups (as opposed to Tarzan, Nancy Drew and other series) in the era. There’s also a Faith and Film interview with Sr. Rose Pacette — I have a sweet spot for movie-loving nuns — who discusses what she likes about Bells and what she thinks is an offensive stretch (most prominently the control O’Malley has over Sister Benedict’s fortunes). It all dates from when she first saw the film decades ago as a much younger person, and it’s clear this is a movie that she, on balance, likes a lot.

I first saw Bells at a neighborhood theater’s 1958 Saturday afternoon triple bill — bookended by Stanley Donen’s Fearless Fagan and Bob Hope’s arguable career stretch in The 7 Little Foys. I came out of it with warm feelings toward Bergman’s characterization (Sister Rose comes off the same way) and Catholicism in general, which lasted until the following Tuesday. It was then, up at “my” shopping center, where I witnessed a kid my age from the nearby Catholic school mouthing off a little to a nun — cheeky waggery on his part but nothing more than what I was prone to say every day throughout 12 years in my own school system. It was then that the nun laid a huge slap across his face — not exactly Emile Griffith/Benny “Kid” Paget stuff but enough to make him see stars.

After this, I decided to remain a lapsed Presbyterian, but my love for McCarey’s last great movie (An Affair To Remember pretty close to an exception) has never waned. It’s my favorite Hollywood film of 1945 next to John Ford’s They Are Expendable, another instantly identifiable auteurist work.