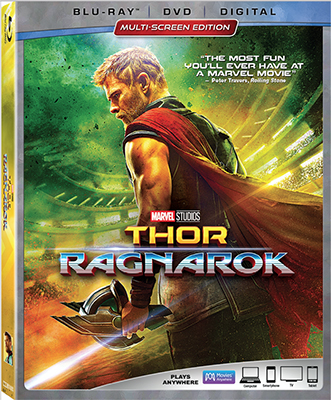 As with any movie franchise, the Marvel Cinematic Universe has become adept and finding formulas that work and sticking to them.

As a case in point, the first two standalone “Thor” movies are generally regarded as among the weaker of the Marvel films. It’s not that they’re bad per se, it’s just that they really didn’t establish themselves much beyond a general space-fantasy epic that connected to elements of the larger Marvel films. As a character, Thor worked better in the “Avengers” films, when he had other heroes to play off of and the films could take advantage of his other-worldly nature for moments of levity and comic relief.

Over the course of 10 years, the MCU as a whole has tended to take itself less seriously, embracing the sense of fun that a comic book movie franchise should have without sacrificing the emotional connection the audience needs to have with its characters.

One of the major contributors to this change in attitude since the second “Thor” movie landed in 2013 was the arrival of two “Guardians of the Galaxy” movies, which are not only the most comedy-driven of the Marvel films, but they also tread in the cosmic setting that should have been Thor’s bread and butter. Ant-Man and Spider-Man: Homecoming further demonstrated that the MCU could embrace a lighter tone while still remaining true to the source material and the overarching storylines being established for the crossover films.

So, it should really come as no surprise to see Thor: Ragnarok really deconstruct the elements of the MCU’s success, what has worked for Thor in the past, and let director Taika Waititi throw them into a blender to whip up his own unique cocktail for a hilarious big screen comic book thrill ride.

The secret ingredient, as far as Waititi is concerned, it seems, is a healthy pinch of 1970s and 1980s nostalgia, as Thor is essentially re-imagined as a Saturday morning cartoon hero akin to “He-Man” accompanied by a rockin’ techno-synth soundtrack, (from Mark Mothersbaugh, whose name popping up in the credits as the composer certainly elicits a “yeah, that makes sense” reaction).

Waititi does a masterful job of re-focusing the efforts of the “Thor” films while both wrapping up previous storylines (without much fuss) and positioning the characters for the next big crossover, Avengers: Infinity War, which arrives April 27.

Thor himself is now much more irreverent, with the script playing to Chris Hemsworth’s natural comedic talents. As for finding others for Thor to play with, this film offers a brief encounter with Benedict Cumberbatch’s Doctor Strange, but really hits a home run by pairing Thor with Hulk, taking advantage of a long-running rivalry between the two characters. A battle between Thor and Hulk in the gladiator pit of an alien world (inspired by the popular “Planet Hulk” comic book storyline) perfectly positions this film as a counterpoint to Captain America: Civil War, in which neither character appeared (as they were off conducting adventures in space, it would appear).

Thor’s only fighting Hulk, though, in order to escape from confinement and recruit a team to take back Asgard from his sister, Hela, the goddess of death. Hela (Cate Blanchett in a juicy performance that borders between menacing and sexy) had been imprisoned by Odin (Anthony Hopkins) for being too cruel, but manages to escape to claim her father’s throne.

The setting of the gladiator planet lets the filmmakers indulge themselves in the colorful renderings of legendary comic book artist Jack Kirby’s designs, and also provide an excuse to just insert Jeff Goldblum into the film (as the Grandmaster of the games) and allow him to just be his zany self, much to the delight of the audience.

The film is a visual spectacle, reminiscent of cult favorites such as Flash Gordon or Heavy Metal, and would be a spectacular showcase for home theater 3D effects were the format not being phased out (at least in the United States. All-region 3D Blu-rays are available from overseas markets such as Europe and Australia).

The home video offers extensive bonus materials, with some exclusive to the digital versions.

The highlight of the presentation on all platforms is probably the six-minute “Team Darryl” short film, the third installment in a spoof series about Thor’s roommate on Earth. This time, with Thor off the planet, Darryl’s new roommate is the Grandmaster, and any excuse for more Goldblum in any setting is a good one.

Also included are about 40 minutes of behind the scenes featurettes, with a three-minute video about the Thor-Hulk relationship presented as a digital exclusive. Other featurettes profile the new female characters, and look at many of the new elements this film brings to the franchise. There’s also a five-minute appreciation of the 10th anniversary of the MCU.

Offering digital exclusives is fine in this case, since the disc comes with access to the digital copies, but the extras are structured differently depending on where you try to watch them, particularly where the deleted scenes are concerned.

On disc, the deleted scenes are pretty straightforward, offered one at a time. Many of them are extended sequences from an earlier conception of the film before story elements were streamlined. So the glimpse of that alternate version is fascinating on its own. The deleted scenes run about 15 minutes, compared with less than six minutes on the disc.

Note that Vudu presents the deleted scenes as a single featurette with them strung together, ending with the fun Easter Egg reference to another Marvel movie that has created some online buzz.

Lastly, there’s an introduction and solo commentary by Waititi, in which he offers a few insights about the making of the film, but mostly maintains the jokey nature he often displays in public. He describes many scenes with tongue-in-cheek hyperbole, hypes up his own skills as both a director and actor, and spends considerable time allowing his young daughter onto the microphone and reacting to her rather than what’s on the screen. No doubt fans of Waititi’s brand of performance art will eat this up, but for general MCU fans, it seems like a missed opportunity to offer a good, in depth discussion about the film.