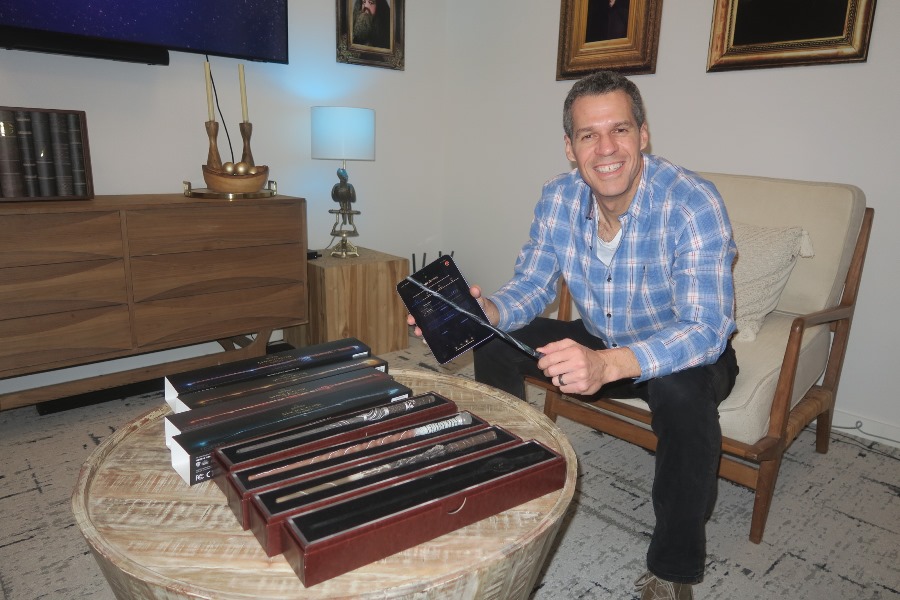 Harry Potter movies continue to be among the best-selling catalog titles on DVD and Blu-ray Disc, both individually and as part of an eight-disc collection Warner Bros. Home Entertainment (WBHE) first released 11 years ago, just in time for holiday shopping.

This holiday season, WBHE has gone beyond discs with a motion-activated smart wand that through an app allows users to turn on the lights, speakers and TVs, as well as cast more than 50 spells from J.K. Rowlings’ Harry Potter stories to create a variety of light, sound and haptic effects through connected compatible smart home devices.

The Harry Potter: Magic Caster Wand retails for $149.99 in the United States and £149.00 in the UK. It is available in four versions, one of which is a limited edition reserved for Harry Potter fan club members. (The fan club wand has already sold out.)

“There’s a lot of excitement around the Harry Potter franchise and how to make it bigger and better,” said Mike Goslin, product lead for the Harry Potter: Magic Caster Wand. “Obviously, it’s very strategic to do things in this universe for the company. The Magic Caster Wand is really our way of letting fans bring magic to life in the world around them. It’s the closest we can get to a real magic wand.”

Goslin is an entrepreneur and creative executive who has launched a number of award-winning products across games, toys, and theme parks. Prior to working for Warner Bros., Goslin for many years led innovation at The Walt Disney Co., where his credits include Star Wars: Jedi Challenges, a successful wearable augmented reality experience, and Disney’s Toontown Online, the first big multiplayer online game for kids and families. Goslin holds more than 100 patents covering AR, VR, Internet of Things and AI.

The wand, he said, is packed with the latest technology. “It has LED lights, it has a vibration motor, it has motion sensors, it has a touch sensor, and it has a battery with circuitry and a radio. The mobile device, either a phone or a tablet, is the hub, and we did that for a number of reasons. The No. 1 reason is simplicity. People already have smart devices, and it’s an easy way to update and have the wand evolve over time.”

The Harry Potter: Magic Caster Wand is the latest entry in the Wizarding World, a group of products and experiences that in addition to the eight “Harry Potter” movies includes the three “Fantastic Beasts” films, the Harry Potter and the Cursed Child stage-play, several video and mobile games from Portkey Games, four theme park lands, exhibitions and other consumer products.

A phone or tablet with the free Harry Potter: Magic Caster Wand app and registration for a free account is required to unlock the wand’s full functionality. The wand is compatible with a variety of smart home devices. Initial device compatibility includes iOS and Android smart phones and tablets; Apple TV, Fire TV and Android TV-enabled smart TVs; Phillips Hue and LIFX smart light bulbs, and most Bluetooth audio home devices including home-theater and standalone speakers. Additional smart home devices will be added as they become available.