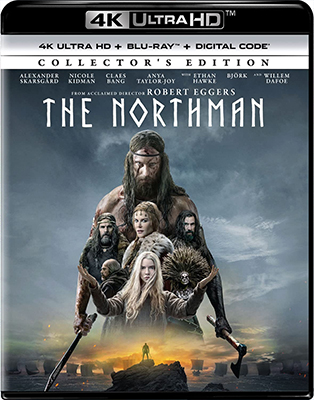 Director Robert Eggers’ The Northman provides him a nice opportunity to deliver a Viking history lesson. Not through the film itself, which is basically Hamlet by way of Conan the Barbarian, but through a commentary track in which he points out where historical research influenced the story and look of the film.

He also spends a surprising amount of time in the commentary picking apart things he doesn’t like about the film that he wishes he could have done in better in hindsight. So, points for honesty.

The Northman is a grimy tale of revenge set in the 10th century, and is based on the Scandinavian legend of Amleth — the same stories that also provided the source material for Shakespeare’s Hamlet (or, as Ethan Hawke helpfully points out in the bonus materials, The Lion King), for those so inclined to notice a few similarities in the plot.

In the film, Amleth (Alexander Skarsgård) is a Viking prince who, as a boy, was forced to flee his kingdom after witnessing his father’s murder at the hands of his uncle (Claes Bang), who subsequently also married his mother (Nicole Kidman) in seizing the throne. Growing up as a Viking warrior known as a berserker, Amleth vows revenge against his uncle, participating in raids on isolated villages until he gets a chance to strike.

He eventually learns his uncle was deposed and is living on a farm in Iceland. Amleth makes his way to the island, where he encounters a young sorceress named Olga (Anya Taylor-Joy), who agrees to aid him as part of a prophecy.

Impressively shot with some well-staged action sequences, the film is dark and bloody, though watching it after the commentary will probably take some of the edge off it.

The Blu-ray includes about 40 minutes of behind-the-scenes featurettes that delve further into the Viking lore that influenced the movie.

The 12-minute “An Ageless Epic” focuses on the film’s story and historic accuracy; the 11-minute “The Faces of Vikings” explores the characters; and the five-minute “A Norse Landscape” shows off the film’s locations and set design.

Getting into more specific aspects of the film, the four-minute “Amleth’s Journey to Manhood” looks at the filming of a ritual early in the story; the four-minute “Shooting the Raid” deals with the film’s approach to action through the shooting of a centerpiece sequence; and the three-minute “Knattleikr Game” discusses an ancient game that is played at a key point in the plot.

Finally, there are nine short deleted scenes that run a total of about 13 minutes, most of which are inconsequential extensions to scenes in the movie.