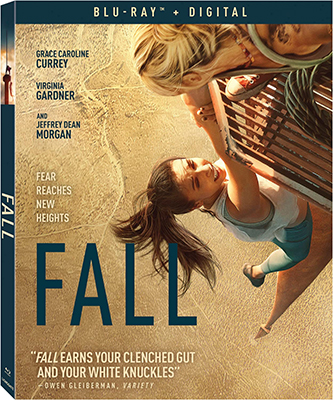 It may not be the most innovative film in terms of storytelling, but Fall definitely earns points for an intriguing central plot device that just can’t help but be unnerving.

The story involves a young woman named Hunter (Virginia Gardner), who is a bit of an adrenaline junkie convincing, her best friend Becky (Grace Carlone Currey) to join her in climbing an abandoned steel antenna tower in the middle of the desert. Hunter and Becky used to be avid climbers together, but Becky hasn’t gotten out much since her husband died in an accident a year earlier.

The tower being old and rusted, the only ladder to the top collapses as soon as the girls make it up, leaving them stranded on a tiny platform 2,000 feet in the air with no way to get down, and no cell phone signal to call for help.

The solutions they can try are thwarted by a series of unfortunate events, such as a pair of campers who spot them deciding to steal their car rather than go for help.

With time running out, gravity a constant threat, and swarming vultures awaiting their inevitable fate, the girls must confront both their fears and some personal demons if they hope to survive.

It’s not the most sophisticated plot, and anyone who has seen enough of these films is going to recognize elements that are well known from other movies, starting with an opening scene that is very similar to that of another climbing movie, Vertical Limit. Heck, the premise itself is just an “Open Water” movie set on a tower. But the film does its job well, maintaining viewer interest in the characters while keeping viewers uncomfortably on the edge of their seats.

The Blu-ray includes a good 15-minute making-of featurette that shows a lot of the challenges of filming in the desert, such as heat and bugs, but also how modern visual effects and editing made the low-budget production easier to pull off during COVID, such as avoiding reshoots to adjust the swearing in the film to bring it a rating that would make it more accessible to a wider audience.

A good commentary from producer-co-writer-director Scott Mann and producer James Harris delves into more details about some of the guerilla filmmaking techniques used, such as buying equipment from Best Buy only to return it when the production was done with it.

Other extras include the film’s trailer, and a music video for the song “I Have Never Felt More Alive” by Madison Beer, though it’s just clips from the movie with superimposed song lyrics.