With over-the-top video distribution the new normal, Disney-owned Hulu wants to explore the mind of the streamer and direct-to-consumer market — to better help advertisers. To do that the SVOD service has introduced what it characterizes as a new “thought leadership” research platform called “Generation Stream.”

More than just a study on an influential subset of viewers, Hulu says the campaign is designed to “deeply” understand the power and impact of the streaming movement and the generation of TV viewers reshaping how people watch TV.

Over the course of the next few months, Hulu said it will unveil behaviors and motivations behind TV consumption, uncover trends that inform future behaviors, and reveal how to connect in “meaningful ways” with content, brands and advertising.

“Diving into the experiences and moods of ‘Generation Stream’ further cements streaming TV as a foundational part of a viewer’s day,” Julie DeTraglia, head of research and insights at Hulu, said in a statement.

DeTraglia said the Hulu team has discovered that there are three key definitions for streamer to view OTT content: Stream Only, Stream Most and Stream Also. The team found that 37% of Generation Stream only stream video content; 47% stream video most of the time and 16% “also” stream together with alternative sources of video entertainment. 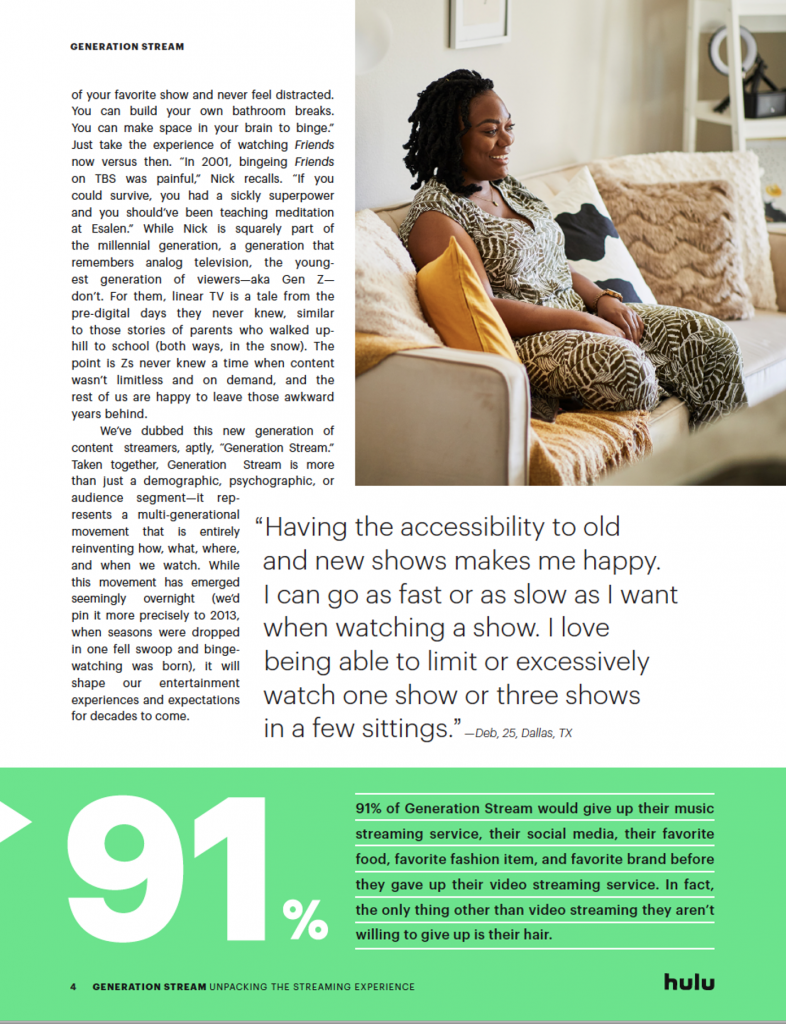 DeTraglia hopes the insights uncovered will underscore what “inspires and moves” the OTT audience, so that Hulu and it advertising partners can better connect with them through content, brands and advertising.

“By exploring this coveted audience, who has been watching TV in a streaming environment for over a decade, ‘Generation Stream’ helps us understand the why, who and how of streaming TV viewers, and will continue to do so in the coming reports,” she said.