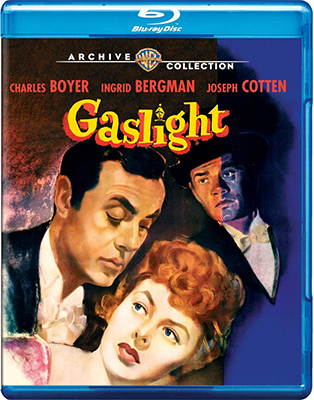 Available via Warner Archive
Warner, Mystery, $21.99 Blu-ray, NR.
Stars Charles Boyer, Ingrid Bergman, Joseph Cotten, Dame May Whitty.
1944. MGM’s superbly cast George Cukor remake of a 1940 British film is definitely a classic, a stylish mystery about a wastrel who marries a delicate woman for her inheritance, which is mostly wrapped up in the London house once owned by the latter’s aunt, who was victim of an unsolved murder a decade or so earlier.
Extras: Includes the 1940 British version, giving the Blu-ray the feel of a college-level course on how a big-screen mystery on the high side of adequate can be rethought into a classic.
Read the Full Review 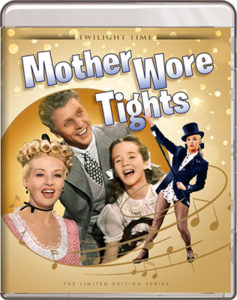 Available via ScreenArchives.com
Twilight Time, Musical, $29.95 Blu-ray, NR.
Stars Betty Grable, Dan Dailey, Mona Freeman, Connie Marshall.
1947. Mother Wore Tights is foremost a Betty Grable vehicle: the most popular movie she ever made; her own career favorite; and the top box office performer of its year.
Read the Full Review