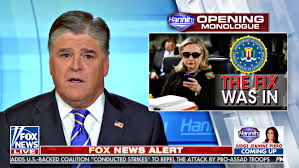 “We are confident there will be an offering for every Fox News viewer,” John Finley, SVP of development of production, said in a statement.

Programming includes documentaries on Judge Robert Bork’s failed confirmation to the U.S. Supreme Court in 1987 and Fox News legal analyst Gregg Jarrett’s The Russia Hoax, which claims the investigation into Russian interference in the 2016 presidential election is really an attempt to “clear Hillary Clinton and frame Donald Trump.”

“Hannity’s America: The Clarence Thomas Story,” which will detail the highly contentious confirmation hearings in 1991 and his book My Grandfather’s Son, about his own background and the events that brought him to the Supreme Court.

“What Made America Great,” hosted by “Fox & Friends” co-host Brian Kilmeade, aims to reveal the hidden history and ongoing controversies behind some of America’s most iconic locations, including, The Alamo, Fraunces Tavern, Fort Jefferson and Mount Rushmore.

Former Los Angeles Police Department detective Mark Fuhrman reveals private thoughts and analysis on criminal cases that have defined America this past half century in “The Fuhrman Diaries.” From the cases that he was involved in personally, like O.J. Simpson and Martha Moxley, to the cases he has obsessed over for years such as the assassination of President John F. Kennedy, Fuhrman shares his personal notes and analysis of the criminal cases that have defined the last half century.

“The First Family” features the Trump family beyond the headlines. In the premiere installment of this series, Eric Trump takes us behind the scenes, including an inside look at his office, behind the scenes of business trips and at home with his wife Lara and son Luke. The episode will also feature a sit-down interview with the president’s son, speaking with Fox Business Network’s Maria Bartiromo offering his perspective on everything from politics to family life.

The director’s cut, never before seen extended version of the docuseries, “Scandalous,” that previously aired on Fox News Channel, covers the investigations of President Bill Clinton by the Office of Independent Counsel and offers a look at the failed 1980s Whitewater land deal. From the Ozark Mountains of Arkansas to the final determination made by prosecutor Robert Ray on Clinton’s last day in office, the series documents the political drama that enveloped Washington and captivated the world during the 1990’s.

The director’s cut of never before seen extended version of the docuseries “Scandalous: Chappaquiddick,” will examine the story of the late-night accident with Senator Ted Kennedy. What really happened that night in July 1969? Told through the eyes of the people who were there and in a rare interview, the family of the victim who has been all but forgotten in the popular versions of the story.

“Scandalous: The Mysterious Case of Tawana Brawley” will take a look into the controversial rape case that inflamed racial tensions at a crucial time in our nation’s history. Civil rights leaders and Brawley’s supporters demanded justice for the teenager, but a grand jury would determine she had fabricated the entire story, damaging innocent lives in the process.

“Riddle: The Search for James R. Hoffa” is a special about the most famous missing man in America, union boss James Riddle Hoffa who disappeared on July 30, 1975. Hosted by Eric Shawn, “Riddle” is the culmination of an extensive FOX News investigation with new forensic details of the crime scene.

Helmed by “Fox & Friends Weekend” co-host Pete Hegseth, “Ace of Spades: The Hunt for Saddam Hussein” will feature interviews with soldiers, military leaders and intelligence officers who tell the story of how American soldiers tracked down and captured former Iraqi leader Saddam Hussein.

Finally, “Watters World” features 20+ hours of the best of host Jesse Watters’ “Watters World” man-on-the street segments that previously aired on FNC, providing viewers with a pulse of the nation on everything from politics to pop culture.