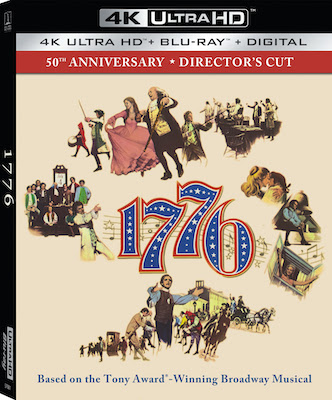 With the enormous success of Hamilton the past few years, it would be easy to overlook an earlier stage musical focused on America’s Founding Fathers — 1776, which first hit the Broadway stage in 1969.

The play focused primarily on the efforts of John Adams and Ben Franklin to convince the Second Continental Congress to vote for American independence from Great Britain. A film version was made in 1972 using most of the original Broadway cast, and produced by former Hollywood mogul Jack L. Warner.

Sony Pictures has kept the spirit of 1776 alive the past few years with a couple of home video re-releases, first a Blu-ray with a restored director’s cut in 2015 well timed to take advantage of the hype surrounding Hamilton, and now with a new 50th anniversary 4K edition that offers four different versions of the film.

There are a number of oddities surrounding 1776 dating back to its stage origins, and many of them carry over into the film, not the least of which is how the drafting of the Declaration of Independence is an unconventional choice for a musical in the first place.

One obvious question that comes to mind is why the movie was made in 1972 and not saved to take advantage of the looming bicentennial celebrations of 1976, but that would seem to just come down to timing. The show’s Award-winning Broadway run had closed in 1972, and much of the production team was quickly carried into the film version, including director Peter H. Hunt (not to be confused with On Her Majesty’s Secret Service director Peter R. Hunt, a longtime collaborator on the James Bond films).

Nor does 1776 escape its 1960s roots, displaying a clear iconoclastic attitude borne from the era’s counterculture sensibilities and anti-Vietnam War sentiments. This is not a hagiography of the Founding Fathers, but depicts them as complicated idealogues with a flair for bickering and a penchant for not worrying about getting much done.

In fact, it’s rather amusing to hear their petty squabbles likened to dysfunctions in Congress now — in a commentary from 1992. The more things change, the more they stay the same seems to be the recurring theme here.

What makes 1776 particularly peculiar as a musical is that its best scenes don’t even have songs, but are pretty straightforward dramatizations of the debates about American independence. One stretch forgoes any songs for more than 30 minutes, a record for a stage musical. The songs for the most part aren’t that memorable, so even if the film left them out it would still be left with a decent look at the proceedings of the Continental Congress, setting aside any quibbles over historical accuracy. And it’s rather funny, too.

The performances are quite good, and the film gives a good sense of how difficult it must have been to bring each colony around to the idea of independence, as the American colonies were not unified on the idea of forming a new nation. New Englanders like Adams were fed up with bearing the brunt of unjust laws. Some aristocratic landowners were content with British rule, seeing their burdens as the price for the production of the Empire. And America’s southern colonies wanted the freedom to continue slavery — and the depiction of that debate and the angst over not abolishing it right away forms a major part of 1776.

William Daniels, who plays Adams, will likely be recognized by younger audiences as Mr. Feeny on “Boy Meets World.” In the 1980s he was better known as one of the stars of “St. Elsewhere,” and the voice of K.I.T.T., the talking car on “Knight Rider.”

John Cullum, who plays the delegate from South Carolina, earned bigger fame as Holling on “Northern Exposure” in the 1990s. James Noble, who would go on to play the governor on “Benson,” plays New Jersey representative and Declaration of Independence signee John Witherspoon, who may or may not be a distant relative of Reese Witherspoon.

At one point, the film features a random cameo from Arnold the Pig from “Green Acres,” whose special circumstances are noted in every commentary offered on the Blu-ray.

And the musical number “The Lees of Old Virginia” near the beginning of the film takes place around a familiar-looking fountain that would go on to be the centerpiece of the opening credits for “Friends.”

Then there’s the matter of why there are four different versions of the film. Handed an original cut nearing three hours, Jack Warner edited what became the theatrical version down to two hours and 21 minutes, trimming scenes here and there, deleted the opening credits sequence, excising lines he didn’t thing were patriotic or flattering to the Founders, and removing the lengthy “Cool Considerate Men” number allegedly because President Nixon didn’t like it.

Much of the lost footage was located over the years, and eventually restored into an extended cut for Laserdisc in 1992, though the formerly missing footage was rather rough.

By 2015, however, the footage was mostly repaired and cleaned up, and a fully remastered two-hour-and forty-five-minute director’s cut was released on Blu-ray, alongside an “extended cut” that was two minutes longer. This extended cut has a few reprises that play better on stage than serve the pacing of a movie, so that slightly shorter director’s cut is the definitive version of the film (and probably why it’s the version offered with the digital copy redemption).

In addition to these two versions, the 2015 disc offered two commentaries on the director’s cut: one with director Hunt and writer Peter Stone, and one with Hunt and actors William Daniels and Ken Howard. Of the two, the one with Hunt and Stone is the better one to listen to, as it is more informative about both the production and the actual history of the piece. In the other commentary, the actors don’t have much to say beyond a few interjections, leaving mostly Hunt to discuss the production.

The 2015 disc also had 23 minutes of screen and costume tests, and three short deleted scenes.

The new 50th anniversary edition includes that 2015 disc, as well as a new 4K disc of the director’s and extended cut, looking as vibrant as ever.

A new Blu-ray bonus disc includes the theatrical cut in HD for the first time, and a standard-definition transfer of the extended 30th anniversary Laserdisc version. It’s easy to tell what was reinserted due to the varying quality of the work prints, and overall the degraded condition of this version just makes the restored HD versions look that much better. While it clocks in at 10 minutes longer than the 2015 “extended” version, most of that time is taken up by a lengthy overture and intermission that isn’t included on the later restorations. All in all there are only a couple of scenes in the Laserdisc cut that aren’t found anywhere else.

The three-hour cut does include the 1992 commentary with Hunt moderated by Joe Caporiccio of Pioneer Video, which produced that special edition.

The three commentaries offer a lot of information about the making of not just the movie but also the original stage production. However, Hunt’s presence in all three means there is a lot of repetition in the anecdotes.

Still, this new disc is a treasure trove for fans of the film and a comprehensive look at one of the quirkiest productions of its day.