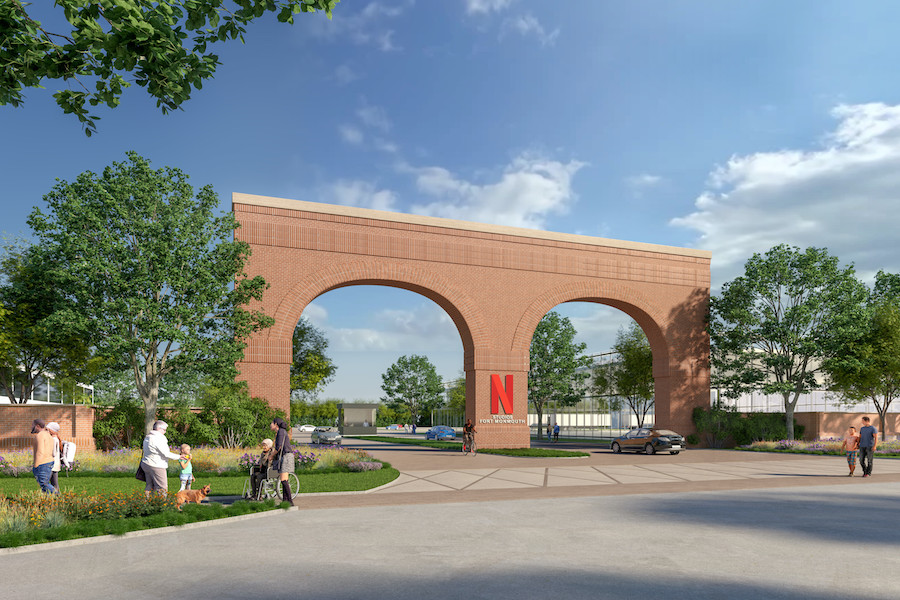 All roads in Hollywood appear to be headed to the Garden State.

Governor Phil Murphy and Netflix have announced that the entertainment company will develop an East Coast production facility on the former Fort Monmouth campus in Monmouth County, New Jersey.

The move will transform a property that has been largely vacant for more than a decade and is estimated to create more than 1,500 permanent production jobs and more than 3,500 construction-related jobs in New Jersey, according to the Netflix press release. Netflix reported it plans to commit $848 million in capital investments to develop the more than 292-acre parcel, adjacent to Route 35 in Eatontown and Oceanport, into 12 state-of-the-art soundstages totaling nearly 500,000 square feet of new development, with the remainder of the property slated for redevelopment with supporting film uses and several community amenities.

“This transformative investment will serve as a cornerstone in our efforts to create a thriving industry from whole cloth,” Governor Murphy said in a statement. “As a result of nearly a billion dollars in film production spending, New Jersey will further solidify its status as an emerging national leader in the television and film industries. Additionally, Netflix’s substantial direct investment will stimulate job creation and spark an entirely new ecosystem of housing, hotels, and ancillary businesses and services, bringing with it countless additional jobs and boosting the regional economy.”

The announcement follows Lionsgate’s investment as the majority tenant in a branded studio under construction in Newark. Lionsgate Dec. 21 was honored with New Jersey’s first-ever “Studio Partner” designation for its pending 253,000-square foot production facility.

New Jersey, like Georgia and California, has increased tax incentives to Hollywood movie and TV show production since 2018 under a push by Gov. Phil Murphy. Netflix’s original zombie movie Army of the Dead was largely filmed in New Jersey.

Netflix’s largest U.S.-based production facility is based in Albuquerque, N.M., where “Breaking Bad” was filmed.

“Since the beginning of this Administration, it has been a top priority of ours to build New Jersey’s film and television industry. It is so exciting that our state has just added another force to its ranks with the addition of Netflix’s production facility at Fort Monmouth,” First Lady Tammy Murphy said in a statement. “This announcement comes with a promise of opportunity to the residents, business owners, workers, and many others across our state. Not only will the facility generate thousands of new jobs, but it will also bring increased economic activity to our local and small owned businesses, ultimately leaving a lasting, positive impact on our great state’s economy well beyond this Administration.”

“We’re thrilled to continue and expand our significant investment in New Jersey and North America,” Ted Sarandos, Netflix co-CEO and chief content officer, said in a statement. “We believe a Netflix studio can boost the local and state economy with thousands of new jobs and billions in economic output, while sparking a vibrant production ecosystem in New Jersey. We look forward to working with Governor Murphy, his administration and local leaders to finalize this deal in the months ahead. We thank the FMERA Board and their staff for selecting Netflix as the winning bid and for supporting our mission to create a state-of-the-art production facility at Fort Monmouth.”

Netflix’s plans for a sustainable, integrated film studio campus will be completed in two phases over the course of several years, according to the press release. The first phase of the project will include the construction of 12 soundstages that will range in size from 15,000 square feet to 40,000 square feet each with a minimum total buildout of 180,000 square feet and a maximum buildout of 480,000 square feet. Additional and ancillary improvements may include office space, production services buildings, mill space, and studio backlots, among other uses customary to the film industry, with the potential for consumer-facing components, such as retail and consumer experiences.

“Netflix’s decision to make a major investment in New Jersey is crystal clear evidence that Gov. Murphy’s commitment to building a thriving film and television industry in New Jersey is working. New Jersey is the birthplace of film, and under Governor Murphy’s leadership our state continues to be a place where production companies thrive,” NJEDA CEO Tim Sullivan said in a statement. “This project marks an extraordinary next chapter in the redevelopment of Fort Monmouth following the devastating closure of the base in 2011.”

The announcement follows the authorization by the Board of the Fort Monmouth Economic Revitalization Authority (FMERA) of a Purchase and Sale & Redevelopment Agreement with Netflix for the property. The Board approved the decision at FMERA’s Dec. 21 board meeting. Netflix was one of four applicants that submitted proposals in response to a Request for Offers to Purchase (RFOTP) issued by FMERA on March 8, 2022, with a deadline of June 6, 2022. Netflix received the top evaluation score, according to the release. The deal now enters a due diligence period and local approvals process before being finalized.

Netflix will pay $55 million for the parcel, including a utility contribution of $5 million and the FMERA office relocation fee of $3 million, per the terms of the RFOTP.

“Our team is incredibly passionate about Fort Monmouth’s revitalization, and is committed to surpassing the Fort’s prior role as a major economic driver in the region,” FMERA executive director Kara Kopach said in a statement. “A project of this scale has the potential not only to create thousands of jobs, but will also result in significant investment on the Fort, and spur local development in support of the project. The magnitude of Netflix’s investment is an absolute windfall for our stakeholders and the State of New Jersey. We’re eager to see this project come to fruition.”

The parcel that will be developed by Netflix contains former residential, administrative, and R&D buildings, warehouses, workshops and additional general-purpose facilities in the Boroughs of Eatontown and Oceanport, within the Main Post section of Fort Monmouth.

“The closing of Fort Monmouth was a devastating economic blow to our region, one from which we continue to strive to overcome,” Senator Vin Gopal said in a statement. “The Netflix plan to develop a production facility on the fort’s campus in Monmouth County, creating both permanent production jobs as well as construction jobs, will be a welcome boon to our economy. I want to commend both NJEDA and FMERA for their tireless work in promoting the economic potential of the region, and for bringing back the commercial vibrancy of the Fort Monmouth area. This Netflix redevelopment will certainly play a starring role in that continuing revitalization.”

“New Jersey was the birthplace of the modern film industry, so we’re glad Netflix is helping to bring it back to its roots with this major investment in people and production facilities here in Monmouth County,” Senator Declan O’Scanlon said in a statement. “This is truly exciting since the redevelopment of Fort Monmouth to ensure it fulfills its massive potential has been a goal of so many of us for so long. I want to thank everyone who was part of this collaborative, bipartisan effort including the Governor, the Fort Monmouth Economic Redevelopment Authority, Tim Sullivan and the EDA staff, the Monmouth County Board of Commissioners, and the Oceanport and Eatontown local elected officials. Job well done!”

“My fellow Commissioners and I are honored to have been in long time discussions with Netflix, along with County Administrator Teri O’Connor, and we thank them for acknowledging the County’s role as a partner in this tremendous undertaking. The County looks forward to continuing to work with Netflix and FMERA to bring this project to fruition and we stand ready to support them with all of our resources,” Monmouth County Commissioner Director Thomas A. Arnone said in a statement. “This project is vital for the future of Monmouth County as it will bring thousands of jobs to our surrounding municipalities.”

“A little over a decade ago, Oceanport’s most important economic and social driver, Fort Monmouth, closed. When the Fort shut down, jobs disappeared, families moved away, and an empty, barren, Fort Monmouth served as a constant reminder of what we had lost. From a redevelopment standpoint, however, what has transpired over the past six years or so in the Oceanport section of Fort Monmouth has been nothing short of remarkable. Netflix’s arrival allows for an incredibly advantageous and creative re-use of this property and will serve to restore a great deal of economic vitality and social energy to Oceanport and Monmouth County at large. Oceanport is thrilled to be part of this proposed redevelopment and we look forward to participating with Netflix in the continued economic and social revitalization of Fort Monmouth” Oceanport Mayor Jay Coffey said in a statement.

“The Borough of Eatontown is excited to participate in what is most likely the largest and most complex redevelopment project in the State. While nothing can fill the emotional void left by the closing of Fort Monmouth, this project will provide a strong economic boost to the region and attract an exciting and vibrant industry to the area,” Eatontown Mayor Anthony Talerico Jr. said in a statement.

“We are excited about this announcement and the economic opportunities both in the construction and operations of Netflix. It will be a great economic engine for the citizens and taxpayers of central New Jersey for jobs and economic growth,”  Wyatt Earp, president of the Monmouth and Ocean Counties AFL-CIO, said in a statement.

“The announcement that Netflix will develop Ft. Monmouth into facilities that will gainfully employ so many IATSE members is great news,” Matthew D. Loeb, IATSE International president, said in a statement. “We are appreciative to Governor Murphy and the State of New Jersey for its commitment to the industry, and look forward to providing safe, skilled technicians and artisans for Netflix long into the future.”

“Netflix’s arrival in the State of New Jersey is a boon for the hard-working men and women of the Building Trades. Together, we’ll build studios and sets that will rival the world and show exactly what New Jersey has to offer,” William T. Mullen, president of the New Jersey Building & Construction Trades Council, said in a statement.

“New Jersey continues to illustrate that it is the ideal location for corporations seeking to grow their business. This is a win-win because it grows the local economy and creates quality union jobs in the  construction sector and the film and entertainment industries,” Charlie Wowkanech, president, New Jersey State AFL-CIO, said in a statement.