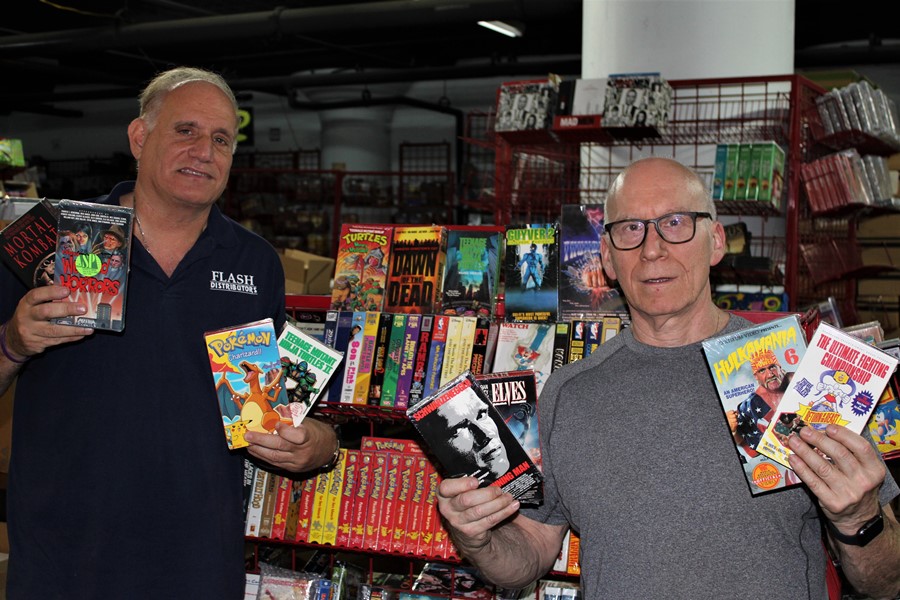 He’s been selling vintage VHS cassettes, most of them still sealed, through auction sites such as Goldin and Heritage — for hundreds and even thousands of dollars apiece.

Scavelli says that over the last three years, Flash has generated sales in the seven figures from tapes that cost him, at most, $5,000, with the highest prices coming for original cassettes that are either still sealed or were sent out by the studios as promotional “screeners.”

“I’m telling you, this has become huge,” Scavelli says. “No one has any idea. And it’s still so early that we think it’s going to explode.”

Brooklyn, N.Y.-based Flash Distributors, which Scavelli launched in 1985, was one of fewer than a dozen national distributors who bought rental-priced cassettes from studios and independent film suppliers in the 1980s and ’90s and sold them to video rental stores, many of them single-owner operations or small regional chains.

The rental business, which at one point generated upwards of $10 billion a year in revenue, began to shrink with the advent of DVD in 1997, as more and more consumers switched from renting cassettes to buying low-priced discs. But Flash and several other distributors soldiered on, selling DVDs and, later, Blu-ray Discs to video retailers not big enough to buy directly from studios.

Even today, Scavelli says, Flash distributes discs to 80 to 100 independent video rental stores. “And then we have sellthrough stores, guys who sell online, and guys we don’t know where they sell, but who buy in bulk,” he says with a laugh.

But the company’s primary business over the last three years has been selling VHS cassettes into the collector market.

“This started during the pandemic,” Scavelli says. “We started noticing people were asking for VHS again, and we began listing some of our old tapes on eBay, Amazon and etsy. We started checking the value of them, and we started seeing that people were asking for some pretty outlandish prices, we felt. It was $20, $50, $100, $500. And we thought, this is interesting. So we started listing them online, and we started getting sales. So we’re like, OK, this is real.”

Most of the cassettes, Scavelli says, “were just old product, cassettes that have been in Flash inventory for 30 years and have never been touched, never been circulated — just overstock we never sold and never returned when VHS ended. And some of it was stuff people were dumping, people offering to give us their VHS for free if we just paid for freight, which we did, because we figured one day it would be worth money.”

It didn’t take Scavelli and his team long to realize that day had come. Before long, Flash was seeking out more surplus VHS inventory, focusing on franchises such as “Teenage Mutant Ninja Turtles,” “Star Wars,” “Star Trek,” “Pokemon” and “Back to the Future” that could be picked up for as little as 25 cents apiece.

“We wanted to buy up as much inventory as possible,” Scavelli said. “We wanted to have all of it. If 10 other people have it, it dilutes the value, so this way we could basically set the value ourselves. Then we started listing more online, and we started realizing people would pay $20 for some, $50 for others, $100 for some, $500 for others — even $2,000. This all on eBay or etsy — Amazon wouldn’t let the prices go up so high.”

Sales were so strong, and some of the prices were so high, that Scavelli and his team contacted some of the online auction houses and collector auction sites that deal only in higher-priced collectables to see if they were interested in working with Flash.

“We had noticed that people were realizing this was becoming a thing, and there were VHS groups on Facebook and other places, and we started going on those, and then we learned that some people were starting to grade them, like you would a comic book or baseball cards,” Scavelli says.

“And that’s where the real money is. We’ve gotten $200 to $300 for used, open VHS cassettes, like rare horror, wrestling, and some of the top franchises such as ‘Star Wars’ or ‘Back to the Future.’ But many of the collectors want new sealed tapes, so we started seeing hobbyists start to grade them, based on the seal, the tightness of the packaging, if it has a sticker on top or watermark. And then some of the professional grading services started doing it, like PSA and VGA.”

Eventually, Scavelli and his team moved over the majority of their product to dedicated collector auction sites such as Goldin Memorabilia, a leading marketplace for trading cards, collectibles and memorabilia, and Heritage Auctions, the Dallas-based auction house that since its founding in 1976 has grown to become the largest auctioneer of collectibles ranging from numismatic collections, comics, fine art, books and luxury accessories to memorabilia from film, music, history and sports.

Just recently, Scavelli listed 12 titles with one auction house that sold for more than $100,000 combined.

Aside from first pressings of iconic films such as Star Wars and The Goonies and popular franchises from the 1980s and ’90s, the titles that bring in the biggest bucks are cult horror and blaxploitation films from indie labels such as Spartan, York, Coliseum and Academy, as well as direct-to-video productions from companies such as Media Entertainment and Shapiro Glickenhaus.

“Most of these titles never made it onto DVD or Blu-ray,” Scavelli says.

Scavelli envisions VHS prices getting even higher, noting that unlike other nostalgic trends, such as the resurgence of the vinyl LP, this one’s still in its infancy.

“People are just starting to get into it,” he says. “But it’s only going to get bigger. Rolling Stone just ran an article about Quentin Tarantino doing a podcast with Roger Avary, with whom he wrote the Pulp Fiction screenplay, on classic VHS films.”

And yet as a profit center for Flash, it’s not going to last forever, since eventually even he is going to run out of inventory.

“It’s already very hard to replenish because we’ve basically bought up everything in the market that has value,” he says.  “There are still people out there with inventory, but a lot of it is either ‘PD’ stuff or documentary-style stuff that isn’t really valuable. But, we have been able to accumulate over 250,000 sealed VHS tapes of titles and early prints that we have found are valuable to the generation that grew up on VHS.”

“It’s interesting, because some of the DVDs and Blu-ray Discs that are out there, the ones that came out as Steelbooks and with cardboard O-rings, they are already starting to become valuable collector’s items,” Scavelli says.“But I do think it will be awhile before DVD has this VHS nostalgia thing, with people talking about how they grew up on this and willing to pay crazy amounts of money.

“New, sealed VHS collecting checks off all the boxes of what makes something collectible … fond memories, technology that changed how society enjoys entertainment, and scarcity.”