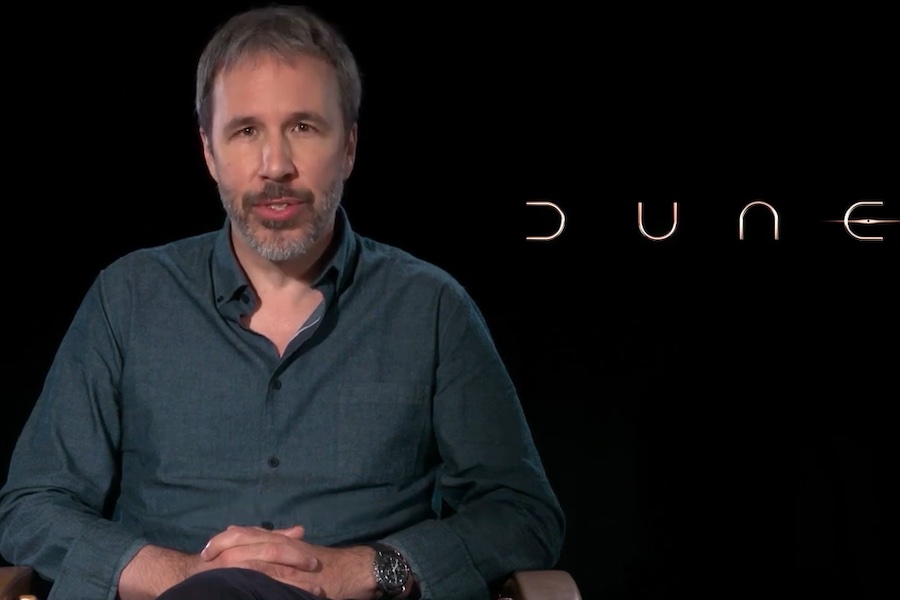 Filmmaker Mode — an Ultra HD TV setting designed to reproduce movie and TV content the way the creator intended — will get a new consumer education push in 2022, according to UHD Alliance president Michael Zink.

Introduced by the UHD Alliance in August 2019, Filmmaker Mode allows viewers to enjoy a more cinematic experience on their UHD TVs when watching content by disabling all post-processing (e.g. motion smoothing, etc.) so a movie or television show is displayed as it was intended by the filmmaker, preserving the correct aspect ratios, colors and frame rates. Among its supporters are Hisense (which highlighted the feature at CES), Panasonic (which also highlighted the feature on its flagship OLED TV), Samsung, LG, Skyworth, BenQ, Kaleidescape, Philips/TP Vision, and Amazon Prime Video, which was the first streaming service to announce support for Filmmaker Mode in 2020 and was the first streaming service to implement automatic switching to the Mode on all LG Smart TVs.

Filmmaker Mode is also supported by the Director’s Guild of America, the American Society of Cinematographers, the International Cinematographers Guild, the Film Foundation, and several top Hollywood directors, including Martin Scorsese.

“We are in this unique position of having a relatively comprehensive ecosystem,” Zink said.

The concurrent theatrical and streaming release of many films during the pandemic has increased creative support for Filmmaker Mode, he noted.

As part of the new focus on education, the UHD Alliance recently got a video assist from Dune director Denis Villeneuve, who discussed Filmmaker Mode as the best way to view the film in the home. Due to the pandemic, Dune was released concurrently in late October in theaters and on HBO Max, where a large audience would see the film for the first time streamed at home. The Alliance pushed the filmmaker’s video on social media in October in concert with the WarnerMedia, HBO Max and Dune promotional teams.

In another online education move, the Alliance enlisted professional TV calibration expert Vincent Teoh to release a YouTube video called “5 TV Settings That Should Be Illegal,” explaining the downsides of TV settings that harm picture quality and emphasizing the benefits of Filmmaker Mode. The YouTube video was viewed more than 800,000 times in two weeks, Zink said.

Meanwhile, the UHD Alliance continues to enlist more companies to adopt Filmmaker Mode. In recent developments, MediaTek will support Filmmaker Mode auto-switching (which employs the setting automatically on applicable content) on its chipsets. This makes it easier for manufacturers using the chipsets to implement the feature, so they “don’t have to reinvent the wheel,” Zink said.

Also, the new specification from APEX (the Airline Passenger Entertainment eXperience Association) was approved in 2021 with Filmmaker Mode as a mandatory requirement for in flight entertainment systems, meaning new systems on planes will offer flyers the setting on movies and TV shows viewed on flights. American Airlines in December 2021 announced implementation of the new system on transcontinental and international flights in 2023.

The UHD Alliance is continuing to work on expanding the Filmmaker Mode ecosystem.

“We’re talking to a number of other OTT services [to enlist support],” Zink said.

Also on the Alliance’s plate for the future are further interoperability testing and ambient light recommendations for Filmmaker Mode to offer the best picture in different viewing situations. 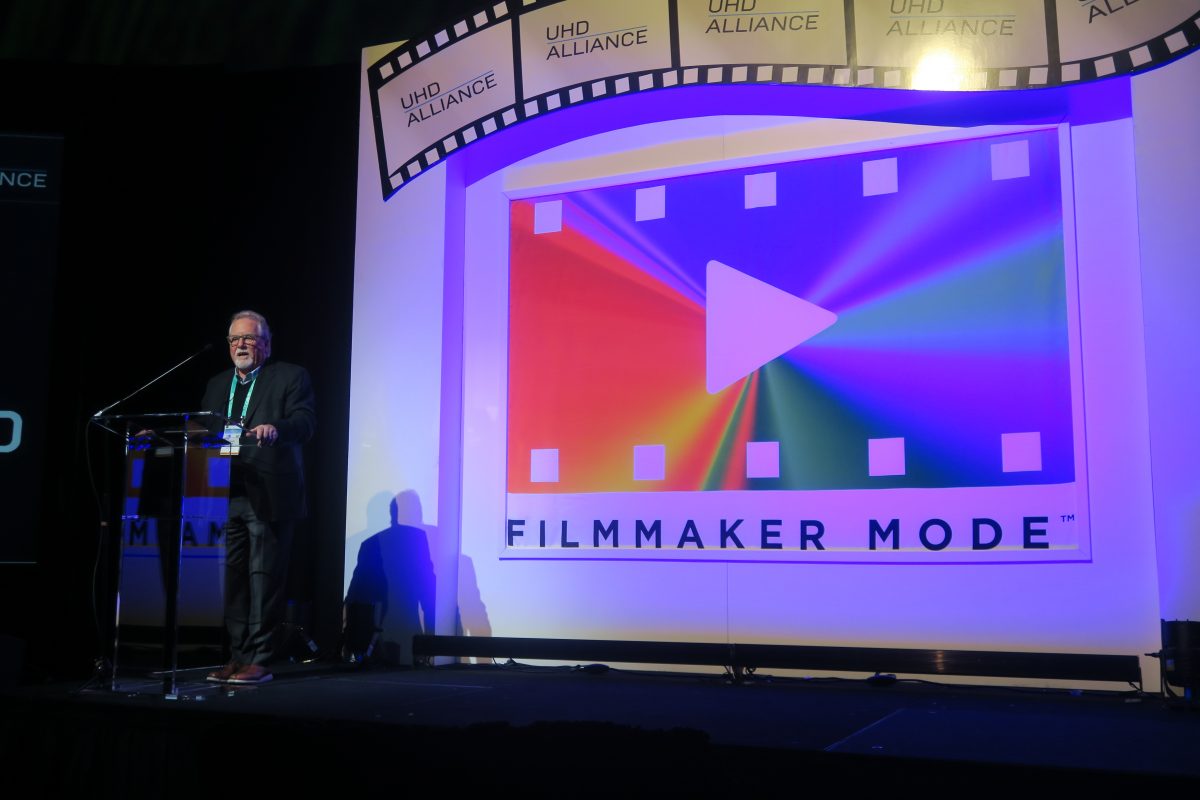 The UHD Alliance on Sept. 30 announced that Amazon Prime will begin supporting Filmmaker Mode next year and that Hisense has joined consumer electronics companies Panasonic, Vizio, Samsung, LG, Kaleidescape and Philips in supporting the feature.

The announcements came during an online presentation with DEG: The Digital Entertainment Group.

Filmmaker Mode, introduced by the UHD Alliance in August 2019, is designed to reproduce the content in the way the creator intended. It allows viewers to enjoy a more cinematic experience on their UHD TVs when watching movies by disabling all post-processing (e.g. motion smoothing, etc.) so the movie or television show is displayed as it was intended by the filmmaker, preserving the correct aspect ratios, colors and frame rates, according to the Alliance.

“Prime Video will be launching this feature on select players next year,” said UHD Alliance chairman Mike Zink. “It’s something that we’ve been working very hard on, and I think we are very, very excited for this to come to life.”

Zink interviewed colorist Jill Bogdanowicz and Stephen Lighthill, president, the American Society of Cinematographers, about the importance of maintaining the intention of creators in content viewed in the home.

“Anyone that does not look at the way the image is going into the home is foolish,” noted Lighthill, adding “producers want to make sure it’s going to look the same in Jill’s suite as it does at home.”

CE company executives also joined the discussion to describe and express their support for Filmmaker Mode.

“We kinda went all in on Filmmaker Mode,” he said, noting, “what really sets this whole effort apart is we got the entire industry to rally around one name and one set of features.”

LG is mounting an in-store display at Best Buy describing the advantages of the feature.

Samsung’s Bill Mandel said the manufacturer put the Mode in all its 2020 UHD TVs, and about a month ago launched new projectors with the feature. Samsung is running an in-store video loop about it on its TVs, he noted. 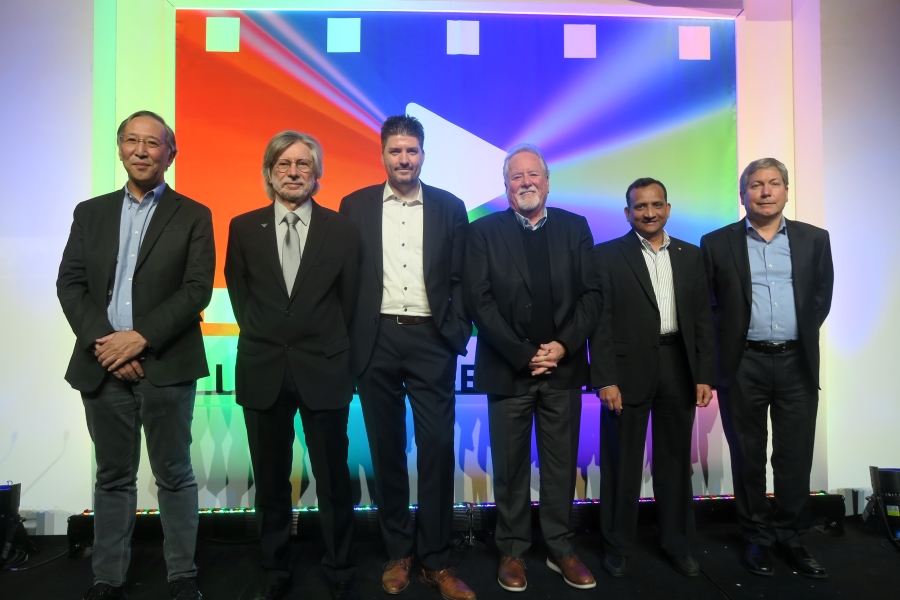 This year’s CES features more than 4,400 exhibiting companies, including 1,200 startups.

A press release from the Consumer Technology Association (CTA), which produces the annual event, touts the show’s focus on “the latest transformative technologies, including 5G, artificial intelligence, vehicle technology, digital health and more.”

“The innovation on display this week at CES embodies the drive and passion that fuels our industry and furthers economic growth on a global scale,” said Gary Shapiro, president and CEO of the CTA, in a statement. “The products and technologies launching this week will inspire, connect and change lives for the better.”

Prior to the CES exhibit show floor opening, there were a number of pre-show events Jan. 5 and Jan. 6, including Media Days, CTA’s 2020 Tech Trends to Watch presentation, CES Unveiled Las Vegas, conference programming at the ARIA and keynotes from Samsung and Daimler.

Samsung Consumer Electronics President and CEO H.S. Kim, delivering the first CES 2020 keynote, focused on the “Age of Experience,” a decade of human-centric innovation that combines hardware and software to create personalized experiences to make life more convenient, enjoyable and meaningful. His talk highlighted the company’s latest advances in intelligent robotics, AI, 5G and edge computing. “In the Age of Experience, we need to re-think the space we have to accommodate our diverse and evolving lifestyles,” said Kim.

CTA’s Steve Koenig and Lesley Rohrbaugh presented 2020 Tech Trends to Watch on Jan. 5 and provided some sales projections. The soaring popularity of streaming services along with 5G connectivity and artificial intelligence (AI)-enabled devices will drive revenue growth for the U.S. consumer tech industry to a record $422 billion in retail revenues in 2020 — nearly 4% growth over last year, according to CTA estimates.

Also on Jan. 5, the annual CES Unveiled events featured more than 220 exhibiting companies, including 98 startups from Eureka Park, the startup hub at CES 2020. 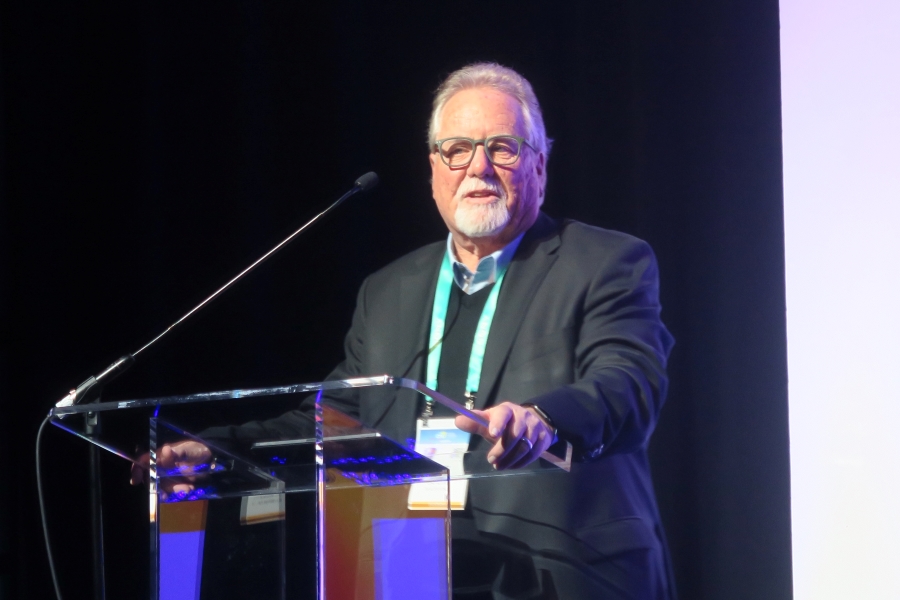 The UHD Alliance held a press conference Jan. 6 on the eve of CES, announcing that three Hollywood guilds, the Film Foundation, consumer electronics companies Samsung and Philips (TP Vision, Europe), and Kaleidescape have joined a growing number of organizations supporting  Filmmaker Mode, which  triggers specific video settings recommended by a host of Hollywood’s most influential directors as ideal for maintaining the creative intent behind films when they’re viewed at home. 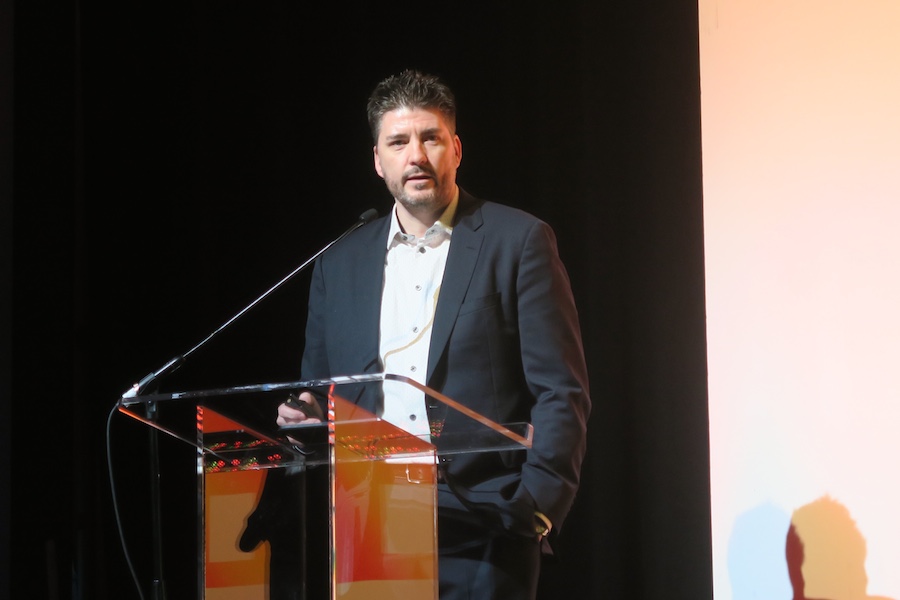 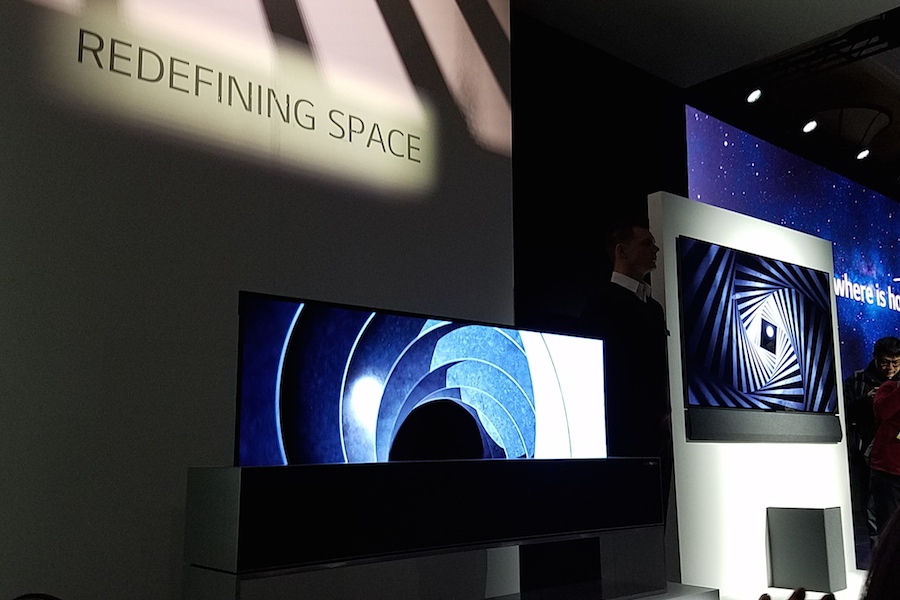 “We’re proud to be among the first to embrace the UHD Alliance’s new Filmmaker Mode,” said Tim Alessi, senior director of product marketing at LG Electronics.

Current TVs use advanced video processing capabilities to offer consumers a broad range of options in viewing various types of content, ranging from sports to video games. Filmmaker Mode allows viewers to enjoy a more cinematic experience on their UHD TVs when watching movies by disabling all post-processing (e.g. motion smoothing, etc.) so the movie or television show is displayed as it was intended by the filmmaker, preserving the correct aspect ratios, colors and frame rates.

LG also showed a 65-inch, 20mm thick TV; its rollup OLED TV, which Alessi said would be introduced this year; and support for DolbyVision IQ.

In addition, the electronics company touted Nvidia G-Sync-compatible TVs that can play games in 4K with up to 120 Hz. Alessi noted that game playing capability on TVs is increasingly important to consumers. 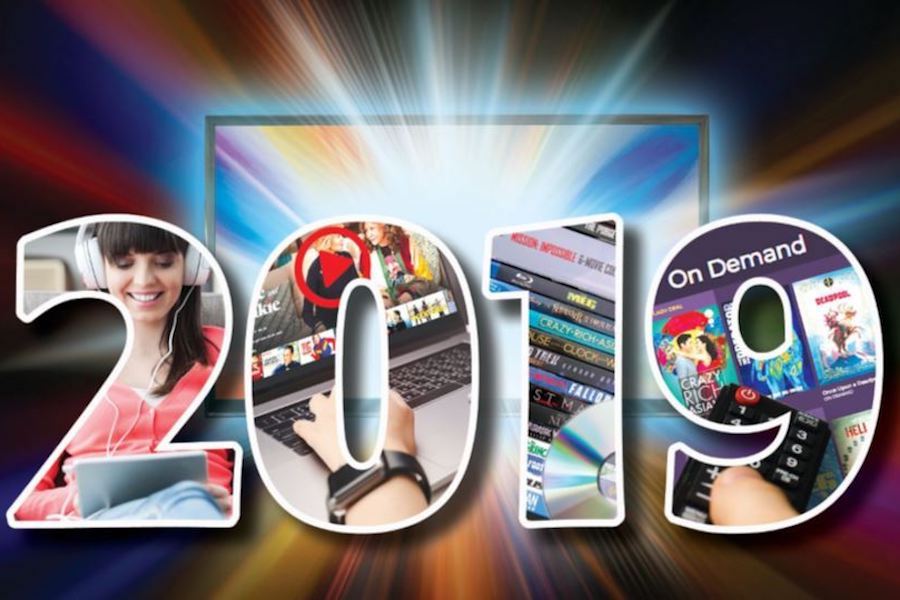 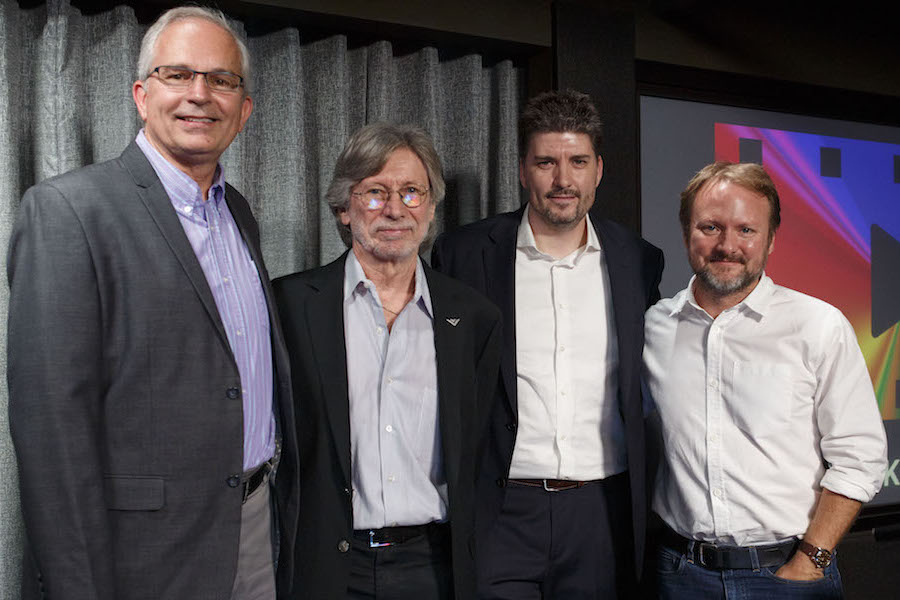 The UHD Alliance, along with leaders in consumer electronics, the Hollywood studios and members of the filmmaking community, Aug. 27 announced collaboration on a new viewing mode for watching movies and episodic TV called “Filmmaker Mode,” designed to reproduce the content in the way the creator intended. (L-R): Panasonic’s Ron Martin, Vizio’s Kenneth Lowe, Warner’s Michael Zink and director Rian Johnson were on hand to announce the launch. (Photo by Patrick T. Fallon for UHD Alliance)