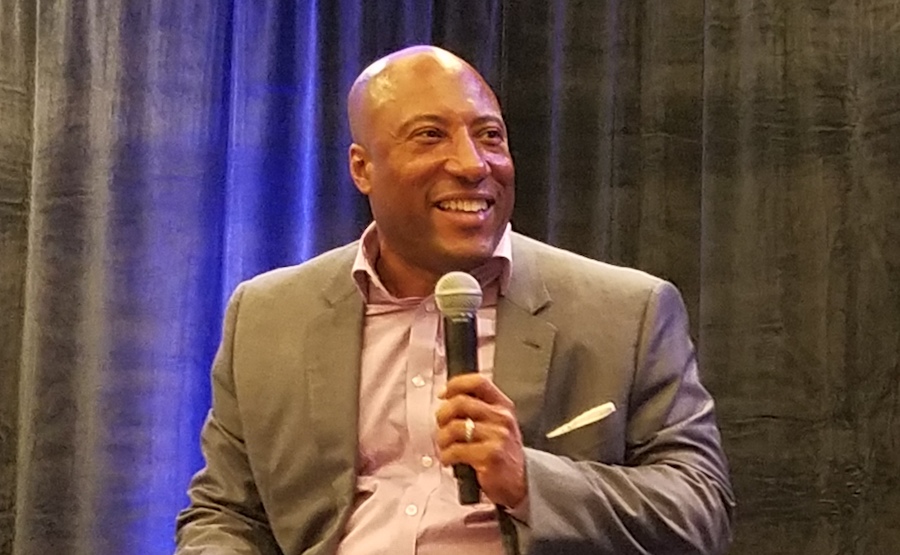 “I want to be the Rockefeller of the digital revolution,” he told the audience Aug. 2 at the OTT & Video Distribution Summit in Marina del Rey, Calif.

Just as John D. Rockefeller reached the pinnacle of success with oil in the Industrial Revolution, Allen plans to succeed with content in the digital revolution.

The OTT market is “in its infancy,” he said, and he is laying the groundwork to be a large player when it matures. The comedian-turned-CEO is positioning his company, Entertainment Studios, to be “Netflix on steroids,” Allen said.

In addition to a high-profile acquisition of The Weather Channel in March, Allen continues to create a series of channels on cable and satellite (Cars.TV, Comedy.TV, Pets.TV, etc.) to build his empire.

“I started buying all the premium .TVs,” he said. “I took all the beach front .TV real estate while everyone was focused on .com.”

He offered several anecdotes about hustling to build his company. For instance, he said he bought an old court set for $1 to use on JusticeCentral.TV by pointing out to the studio that it would cost thousands to tear it down.

One of the next things on his plate is Sports.TV, which will offer international games.

“The only reason why television is alive is because you have to go behind a paywall to get sports,” Allen said, adding “the true religion of the world is sports.”

Acknowledging his humble beginnings as the son of a teenaged mom in Detroit, Allen said, “I am the epitome of why America is so wonderful.”

He pointed out the opportunities are better than ever for the entertainment entrepreneur.

“[Fox mogul] Rupert Murdoch spent most of his career chasing global distribution,” he said. “With OTT, you have it at your fingertips.”