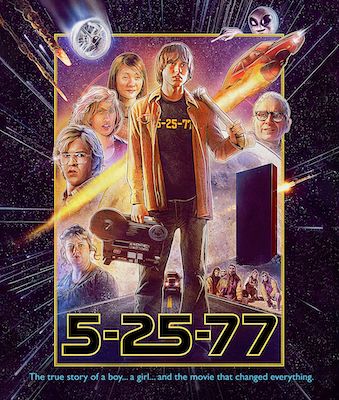 Director Patrick Read Johnson’s autobiographical comedy 5-25-77 is an offbeat ode to the spirit of imagination and a celebration of sci-fi filmmaking in the 1970s. This fictionalized recounting of Johnson’s formative years chronicles his growing up as a film fanatic in the 1970s and how he ended up seeing an early cut of Star Wars.

The film begins with Johnson as a boy seeing 2001: A Space Odyssey, sparking his love of cinema. He then spends his childhood making fan films based on the popular sci-fi and horror films of the time, from Planet of the Apes to Jaws.

In high school, Johnson (played as a teenager by John Francis Daley) dreams of leaving his midwestern town and moving to Hollywood. On a whim, his mother calls the publisher of one of his favorite sci-fi magazines and arranges for him to meet with some producers, resulting in a visit to the early Industrial Light and Magic facility, where he meets Steven Spielberg filming Close Encounters of the Third Kind. But his mind is really blown with the ILM visual effects gurus show him a rough cut of Star Wars, making him the first person outside of Lucasfilm to see it (earning him the moniker of “Fan One,” the real Johnson says in a bonus Q&A).

Johnson then returns to Illinois to spread the gospel of Star Wars, hoping it will ignite a craze for sci-fi that would make him seem not so different from everyone else. There are certainly any number of potential viewers who grew up heavily influenced by Star Wars who can relate. The title, 5-25-77, references the release date of the original Star Wars.

Lending an air authenticity to the project is the fact that it was produced by Gary Kurtz, who also produced the original Star Wars as well as The Empire Strikes Back.

The film has been in production since the early 2000s, with most of the filming taking place from 2004 to 2006. Complications arose when the agencies representing Johnson began merging, while distributors at the time didn’t think there was much of a market for “Star Wars” tie-ins anymore (this was between the release of Episode III and Disney’s purchase of Lucasfilm). Various visual effects were added over the next decade, and it made appearances at film festivals, but the final version wasn’t completed until 2022. To put the extended production time in perspective, Daley is now an established writer and director in his own right, while Kurtz died in 2018.

The Blu-ray includes a good commentary track with Johnson and collaborator Seth Gaven, plus a 52-minute Q&A from an early screening of the film at the Fantasia Film Festival in 2013. Also included are three trailers for the film, plus three behind-the-scenes photo galleries — the various slideshows run a total of about 18 minutes.