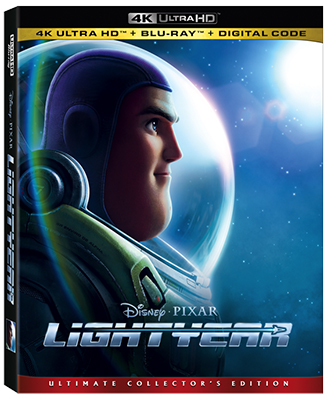 When first announced, the idea of a solo Buzz Lightyear movie caused a lot of confusion among “Toy Story” fans, particularly with the casting of Chris Evans to voice the character instead of Tim Allen.

The rationale, as originally explained, was that the movie would be the story of the astronaut that provided the basis of the toy that ends up in Andy’s collection. This conjured notions of Pixar doing a “Right Stuff” type movie set during the Cold War, which would seem to justify the casting change.

Then the trailers arrived and previewed a story containing the usual Buzz Lightyear staples associated with the toy: futuristic ships, Star Command and Zurg, belying the notion of this being about a “real” character within the “Toy Story” universe.

No, as the opening text of the film makes clear, Lightyear is a movie released in the early 1990s in the “Toy Story” universe that provided the inspiration for the Buzz Lightyear IP and became Andy’s favorite movie, which is why he wanted the toy.

Providing in-universe backstories for the fictional toys in Andy’s room is certainly not out of the ordinary for the “Toy Story” franchise. The second movie went into a lot of detail about Woody’s origins as a character in an old 1950s Western puppet show.

When it comes to Buzz Lightyear, however, Disney and Pixar already played the IP expansion card with the “Buzz Lightyear of Star Command” cartoon in 2000 that established in its first episode that it was the inspiration for the Buzz toyline. The show even had a spinoff video game like the one seen in the second movie.

But if the Buzz Lightyear the toy is supposed to be the merchandising for Lightyear, then that just brings back the question of why Tim Allen isn’t doing the voice, since the actors in sci-fi movies record voices for toy versions of their characters all the time.

Changing the voice isn’t so unusual in those circumstances either, as toy tie-ins often bring in soundalikes to save money. But is that supposed to mean Tim Allen’s voice for the Buzz Lightyear toy has now been retconned to be a cheap imitation of Chris Evan’s voice from this movie? That doesn’t seem very respectful to Allen’s contributions to the franchise for the past 25 years. (And it’s doubly ironic considering how much Evans is trying to echo Allen’s performance.)

To be fair, the “Star Command” series did have Patrick Warburton voicing Buzz, though Allen did the voice for the movie version of the first episode.

Lightyear pretty much disregards any storyline connections to the “Star Command” show anyway. It plays a lot more like a reimagining of the Buzz character, with the tag line about it being Andy’s favorite movie added later to tie it more explicitly to the franchise.

The idea of Lightyear being a big-budget sci-fi adventure movie from the early 1990s doesn’t quite ring true either, as it presents themes and plot points that while common among Hollywood attitudes today would not have been touched by studios 30 years ago.

On top of that, Lightyear, though animated for us, is supposed to be a live-action movie within the context of the “Toy Story” movies. That’s yet another aspect to the presentation that franchise fans couldn’t quite wrap their heads around, and when all was said and done it ended up being among the lowest-grossing box office performers in the Pixar canon.(Maybe that’s the movie they should have made — an actual live-action Buzz Lightyear movie done in the style of early 1990s actioners with minimal CGI. It certainly would have upped the curiosity factor.)

The story itself seems like a pastiche of better films of the past decade, from Interstellar to The Lego Movie 2, that presents a rather generic Buzz Lightyear adventure layered with subtle references to the “Toy Story” movies.

Buzz is part of a Star Command expedition that crashes on an alien world. Vowing to get the crew home, he volunteers to test-fly new ships with hyperdrive technology, but each mission pushes him years into the future while he doesn’t age at all. He witnesses the crash survivors form a new colony, and a new generation decides to stay on the planet and cancel further missions. So Buzz finds himself a man out of time, but after his last attempt to break the lightspeed barrier he discovers the planet is under attack by an army of killer robots led by Zurg. To stop them, he is forced to team with a ragtag squad of Star Command cadets, their efforts ultimately conveying a message of teamwork and togetherness over individualism. Plus there’s a cute little robot cat.

Lightyear has its moments, but it’s probably going to end up as the least memorable “Toy Story” movie. The funniest thing about it just might be how many kids will want to see it thanks to the glut of Lightyear toys released to stores as a marketing tie-in, just like Andy did, apparently. Judging by the box office returns, not that many — I guess parents weren’t fooled (or waited for it to show up on Disney+).

The Blu-ray includes an audio commentary with the key filmmakers, who discuss how the story evolved and how scenes changed over time because they weren’t meeting expectations. For example, the film was originally going to be the story of Buzz’s first Star Command mission and earning his iconic suit, while the final product starts with him already on active duty and wearing the suit.

Also included are nearly 27 minutes of deleted sequence storyboards that provide more insights into this early conception for the film’s storyline.

Rounding out the extras are three featurettes. The 14-minute “Building the World of Lightyear” show’s off the process of designing the film’s various environments, ships and characters; The nine-minute “The Zap Patrol” profile’s Buzz’s new team; and the 10-minute “Toyetic” is about the film’s toy merchandise, as well as how toys such as Legos were used to help design various ships for the film with an eye toward creating the toys later. The heavy toy haul isn’t unexpected for a “Toy Story” movie, but seeing the how the production and toy development are tied together certainly explains a lot.