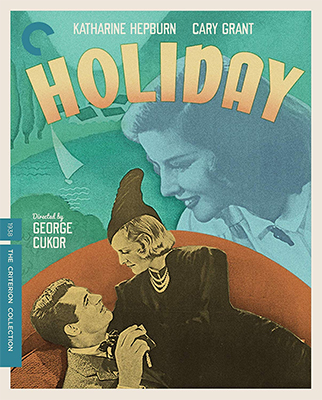 Given a formidable screen team made up of two household names until the day each of them died, it can be surprising to note that the four pairings of Katharine Hebburn and Cary Grant were only restricted to a five-year period: Sylvia Scarlett (1935; box office flop at the time); Bringing Up Baby (1938; ditto); Holiday (1938; middling performance, I surmise); and The Philadelphia Story (1940; smash). The motto of this, I guess, is to keep plugging away, but Holiday has been my clear favorite of the quartet for virtually all of my life, from the first time I saw it as a very young teenager in 1960 or so. Hepburn is as full of herself as ever, but this time in charming ways against a story that makes one fully empathize with her character. And Grant, so soon after The Awful Truth “made” him, gets another chance to deliver on his burgeoning screen charm but against a less farcical backdrop.

Adapted from a play Philip Barry wrote well before he concocted The Philadelphia Story, this earlier comic portrait of the unapologetic rich had been previously filmed in 1930, and one of the things that makes this Criterion release so exceptional is the earlier picture’s bonus inclusion here — that is, the entire movie — in a pristine print. More on this later, but the earlier Holiday plays surprisingly well considering its filming so shortly after the transition to sound, though it’s no match for the subtle fluidity director George Cukor brings to the disc’s main-event second version. (Of the Hepburn-Grant quartet, Cukor directed all but Howard Hawks’s Baby). His creativity extends to taking advantage of Grant’s well-known early history as a circus acrobat even down to a wonderful capper at the end, and — in the “who knew?” department — the ability of a memorably featured player Lew Ayres, who plays Hepburn’s alcoholic brother, to play the harmonica. I don’t know if Ayres got the credit he deserved at the time — he did get a National Board of Review acting citation for 1938 — but it’s a much revered performance today by movie journalists who know what’s-what and what’s-not.

In a premise that may have played better in 1930 than ’38 because it took a while for the effects of the Depression to hit the so-called common man to hit with full effect, this period alternative to Wild Boys of the Road centers on a New York family residing in a block-long apartment that advertises conspicuous consumption accrued cash at all costs, though only two of its four members really go along with the program. One is the banker patriarch played by Henry Kolker in a keenly nuanced tightrope performance that conveys rigidity but not inhumanity, and the other is his younger daughter (Doris Nolan), who has always lapped the same Kool-Aid. The movie’s one flaw for me is that down-to-earth Grant could meet Nolan on a skiing trip and regard her as something akin to the ends of the earth, while at the same time, Hepburn keeps touting how wonderful her younger sis is and how close the two have been all of their lives. Instead, Nolan’s is a real chill-pill performance; this is one element where the ’30 version (directed by Edward H. Griffith) has it over the Cukor, thanks to what Mary Astor brings to the later Nolan role (the former’s pre-Code lingerie isn’t exactly a deterrent).

Grant shows up at family digs and begins by knocking and entering at the kitchen, where his schmoozes with the staff immediately peg him as an unpretentious good guy, even if he does labor (as a novice) in the same world of high finance that engendered the wealth for his future in-laws, to say nothing of  their Old Money ancestors. What he finds is an apartment elevator that goes up to the fourth-or-wherever floor and and at least one room that, in today’s terms, could all but hold the Kennedy Center Honors. From a film lover’s point of view, the joint is another tribute to Columbia Pictures longtime art director Stephen Goosen, who had just won an Oscar for Lost Horizon (he’d get another nomination here) and later did the hall of mirrors sequence to conclude The Lady From Shanghai. In terms of the plotting (Daniel Ogden Stewart screen-adapted, as he later would with Philadelphia), all this only serves to intimidate Grant — until he’s invited to an immaculately kept-up playroom (and favorite room of the siblings’ late mother) that emerges as the one civilized respite. The fact that Hepburn basically lives there exclusively during the day is probably an instant tip-off that Grant is likely courting the wrong sister.

Even so, Hepburn wants to throw an intimate (like, five or so people) engagement party, which kind of becomes a supremely delightful extended set piece when the figure increases maybe 50-fold, which allows the story’s elements to come together. One extreme is represented by Grant’s best buds — an academic couple (Edward Everett Horton, Jean Dixon) who don’t fit in with the rest, and good for them; I have never forgotten the bit from that first young-teenaged viewing of Horton handing his galoshes to one of the servants when making his entrance to the party (I also remember my mother, with whom I was watching it, laughing hard at this). The other extreme is Henry Daniel and Binnie Barnes — he from the same family cloth and begrudgingly willing to set Grant up with all the right people that any character named Seton Cram — could any fictional moniker be better? — would value. (Have you ever seen a movie in which Daniel walked into a scene, and you were instantly assured?)

As another peppy bonus extra, a pair of Michael’s who turn me into a glut on the market — critic Sragow and Schlesinger — do an often funny back-and-forth for about half-an-hour, a format I always enjoy when Criterion elects to do it. They’re arguably a bit hard on the original film’s staginess and Oscar-nominated Ann Harding’s “stagey” performance, but within the confines of the drawing-room genre and when the film was made, it’s one of the more absorbing early talkies I’ve seen recently. Edward Everett Horton has the same role, so it’s fun to note some subtle differences — and though I’d never even begin to rate Harding’s performance over Hepburn’s, she is much more “my type” when it comes to life’s basics (but that’s just me).  The day-and-night difference between both versions is Grant vs. Robert Ames, who reads his dialogue sympathetically enough but is one of those ubiquitous early-’30s actors who’s too old for his role and then compounds this problem by looking older than he even was during filming (40 or 41). In keeping with this, he died in 1931 of delirium tremens, which I didn’t even know was something that could kill you (as opposed to, say, cirrhosis). Amazingly, he had 13 features and one short subjects in release between 1930-32, though I wouldn’t have wanted to be the poor guy assigned to go to the trailer and say, “Five minutes, Mr. Ames.”

Other extras include excerpts from 1970-72 AFI interviews of the great Cukor back when he still had all his marbles (when I met him at the AFI in the ’80s, he didn’t), where he talks a lot Hepburn and writer Stewart, both of whom he worked with frequently. There’s also a costume photo tribute and a welcome essay by Slate critic Dana Stevens, who terms the film was a box office dud — in contrast to the Sragow-Schlesinger riff, which characterizes its performance as “all right.” In any event, I love hearing the two Mikes  really sticking up for what is my favorite Hollywood movie from 1938 after The Adventures of Robin Hood (The Lady Vanishes is, of course, British, and Bringing Up Baby has always put me off, though I suppose that one last re-evaluation before I enter that great multiplex in the sky is inevitable). Holiday is Criterion in 4K, so it’s almost definitely inevitable that I’ve never seen it looking as good in my life.