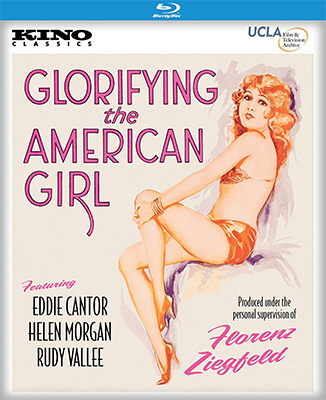 Other than a blink-and-you’ll-miss-him shot of Flo Ziegfeld himself from what appears to be something like a newsreel source, the legendary impresario had little to do with Florenz Ziegfeld’s Glorifying the American Girl other than to lend his name, lend the movie his own title slogan and pick up a paycheck. This last he probably needed because by the time the film was finally released three or four years after it had been presumed that cameras were about to roll, the 1929 Stock Market crash, which had occurred only five weeks earlier, had buried Ziegfeld’s shirt in the rubble.

The economic meltdown further jinxed a movie whose production woes and revolving scripts-of-the week were known by those even beyond industry insiders and junkies — at a time when backstage musicals had flooded the market. What’s more, MGM’s The Broadway Melody had taken the second Best Picture Oscar earlier the same year, setting a standard that Girl’s terrible reviews (on top of everything else) weren’t going to overcome. Yet matters aren’t always that pat as the film begins closing in on the century mark, and the picture — seen here via UCLA’s Film & Television Archives’s 35mm restoration and not Alpha Video’s DVD eyesore — is a somewhat surprising mix of the inevitably clunky and, yes, innovative. Many of the clunks, however, also have their compensations.

For one thing, the final script is unflinchingly tough in its portrayal of an equally pretty and talented hoofer (Mary Eaton) pushed into exhaustive chorine labors as well as co-dependence with a lecherous partner (Dan Healy) who likes taking advantage of randy life on the road. Kino Classics’ new Blu-ray of the restoration has a slow, halting but rather effective commentary by Richard Barrios, author of A Song in the Dark: The Birth of the Musical Film (again, there were so many early-talkie musicals that one could write an entire book on them). In it, he gives the impression that he’s really thinking before speaking so as to make his points with full force, and one he keeps returning to over and over again deals with Girl being a New York production (as part of Paramount’s East Coast operation), which set the table for some seaminess that a more rose-colored “L.A.” treatment might have given it. This is one more thing that might have turned critics and audiences against the picture but makes it seem contemporary in ways other than cinematic style. And it does so as we approach the theatrical release of Bombshell, in which the leering eyes belong to the late Roger Ailes.

For an added alternative and comparably chaste romantic dimension, Girl introduces Eaton’s character working as a music store song plugger hawking sheet music by delivering singing samples as her piano accompanist (played by Edward Crandall) dreams of marriage. Meanwhile, he is a yen target himself of a second employee (Gloria Shea, whose real-life brother was the lawyer for whom Shea Stadium was named). She’s pretty herself but seems to be out of the running in this hotbed of comeliness — a situation altered after a Long Island picnic when Eaton gets a chance to strut her professional stuff by performing outside and on the grass with a troupe of traveling vaudevillians. These include so-called seasoned pro Healy.

This is a remarkable extended sequence and the movie’s best — offering a remarkable contrast to the standard Lights of New York (or to offer a fictional example, Singin’ in the Rain) view of early talkies suffering from microphones hidden in flowerpots or other stationary objects that hindered movement and the blocking of performers. There’s none of that here, and if someone had asked, I’d pegged this scene as having been filmed at least a couple years later. Eaton, a bonafide real-life Ziegfeld vet that he kept in the wings in case his top female star (Marilyn Miller) got out of hand, is seen to exceptional advantage — though other scenes, alas, are in the primitively cinematic mode we’d expect. This said, the No. 1 culprit would seem to be the script — which, for all of its rewrites, is a patchwork affair particularly in the manner it shoehorns in a budding relationship between Crandall and Shea.

These prelims kill time as we await what was intended to be the movie’s big payoff. This is a) inserted shots of — talking about shoehorning — show biz luminaries of the day plus New York bad-boy mayor Jimmy Walker (whose wife looks nothing like Vera Miles of the Bob Hope Walker biopic Beau James) entering the New Amsterdam Theater to see Ziegfeld’s revue. Plus b) three specialty numbers offering ’20s star power (Rudy Vallee, Helen Morgan and Eddie Cantor) plus a couple production numbers in surviving two-color Technicolor that feature glorified girls. These scenes suggest what a Busby Berkeley set piece might have looked like had the female participants been decked out in costumes so diaphanous that they appear to be naked. Thus, when Girl briefly showed up on local TV showings after Paramount sold its 1929-49 library to MCA in 1958, these titillaters, which at that point lacked even un-restored color, were excised by station censors (I worked for years in high school and college at a CBS affiliate that owned this Paramount package, and this kind of thing used to go on all the time to placate all the Mayberry burgs in the viewing area).

Though Vallée ended up qualifying in the ’40s for MVP awards as a comical actor in both The Palm Beach Story and The Bachelor and the Bobby-Soxer, his status as a onetime singing idol was mystifying to me even as a kid — something akin to, say, the target female audience getting its thighs all aquiver over, say, William H. Macy. The Vallee phenomenon is similarly inexplicable here, though Morgan is always worth seeing, and though her “What Wouldn’t I Do for That Man?” number isn’t at all imaginatively staged by director Millard Webb, the set’s visual is strikingly dramatic: white piano against an inky black background. BTW, Morgan had just been at Paramount’s East Coast Astoria studio filming Rouben Mamoulian’s Applause, an official “history-book” classic from the transition to sound that still has a little juice. Morgan does not (surprise, surprise) look at all like Ann Blyth, who played her in a 1957 Warner biopic, which was only co-star Paul Newman’s fourth feature.

This leaves Cantor, whose concluding skit set in a haberdashery might be funny if it didn’t seem to run longer than the 287-minute director’s cut of Wim Wenders’ Until the End of the World Criterion just released. I’ve never seen him so thin, which figures because it’s the earliest I’ve ever seen him, though he looks more than a quarter-century younger than the Cantor I watched a lot on NBC-TV’s “The Colgate Comedy Hour” in the early ’50s. If you can get over the fact that he was still doing blackface on national television in 1952 (whew), Cantor was, ironically, a progressive who wiped sweat from Sammy Davis Jr.’s brow on live TV from around the same time and took a verbal swipe at Joe McCarthy sooner than any celebrity I know. I am probably one of six people who actually paid money to see my ever-unctuous fellow Ohioan Keefe Brasselle portray him in Christmas ’53’s The Eddie Cantor Story, but I was only six and didn’t know what Brasselle would bring to the party, which was always something along the lines of Lake Erie carp.

The length of Cantor’s skit in Girl deadens the finale, but there’s a lot of real-life subtext here that makes the movie interesting. We see, at the very beginning, a moving graphic of young women marching to New York from all over the company to be glorified by Flo. But what we know, both from actuarial odds and a reading of Nathaniel West’s L.A.-based The Day of the Locust, is that most of these women will be mangled and discarded by the system. Lead Eaton, whose one other screen role of note had just been with The Marx Brothers’ Astoria-shot The Coconuts, got dumped by the biz and died of cirrhosis at 47 (she also had a performing sister who became victim of an unsolved murder). Her story reminds me of Peggy Shannon’s, who met a similarly tragic conclusion but with even more squalor thrown in, despite having proven herself both in the looks and acting department just after Eaton’s brief screen heyday.

In addition to the Barrios commentary, there’s a short featurette giving us a brief outdoor glance at movie star homes, a Hearst Metrotone News excerpt of Ziegfeld in rehearsal and 1934’s Oscar-winning La Cucuracha. The last was the first live-action short subject to employ the new three-strip Technicolor process that Disney cartoons showcased — sandwiched in history between some individual feature-film sequences and 1935’s Becky Sharp, which was the first full-length feature to go all the way with it. Every print I’ve ever seen of La Cucuracha (even on laserdisc) has looked spectacular, and the one here is no exception. This package’s transcendent value, though, is to give us a better than usual feeling for what vaudeville must have been like, even as it found itself under an oxygen tent thanks to thanks to the double whammy or radio and the Depression.