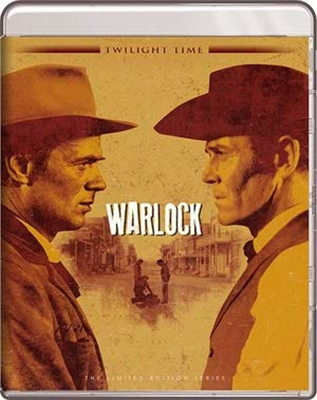 Warlock has surprised me in recent years by showing up in multiple chat room discussions I’ve stumbled across that deal in particular or in passing with underrated Westerns. The surprise comes from my having actually seen the picture during its initial theatrical run in spring of 1959 at a downtown movie palace (called The Palace) and not having been particularly bowled over. (For one thing, Rio Bravo had opened just a few weeks previously.)

Looking at its new Twilight Time Blu-ray, I still think that a lot of the directorial fire went out of Edward Dmytryk’s belly after he came back from the Blacklist, but Warlock isn’t another of his later pictures that never quite deliver on their potential, such as The Caine Mutiny, Raintree County (which was an admittedly troubled production), The Young Lions and even The Mountain, which had Spencer Tracy and VistaVision photography of the French Alps. Instead, this heavily psychological reworking of the Wyatt Earp saga is about as good as anything Dmytryk did after Broken Lance, courtesy of a talky but grown-up script by Robert Alan Arthur, adapted from an Oakley Hall novel. Thanks to Julie Kirgo’s liner Twilight Time notes, I learned that Hall’s source novel was a Pulitzer finalist and that Thomas Pynchon himself was a big fan of Hall’s work.

To get a little cute here on the Pynchon front, let’s just say that Warlock (the town) has its share of inherent vice. It originates with a local thug who’s shacked up just beyond town limits and played to general surprise by that literal boy-next-door Tom Drake; he’s good enough here to have had a better post-MGM career than he had. Displaying a slightly cooler demeanor than the band of hothead hoods under his wing, Drake is still a part of their regular ride-ins to wreak mayhem and dispatch local lawmen to their graves. The more moneyed citizens have finally had it and agree to pay a professional town tamer $400 a month, which embarrassingly outpaces the salary of the official sheriff. The deal is that this uncommonly polished usurper will basically set up himself up as a dictator, his approach to keeping these and other lawbreaking creeps on the straight and narrow on penalty of instant death. Expect town egos to be ruffled here and there — and to be sure, this gunman has a history of past employers eventually turning against him.

Henry Fonda has this role, and it’s an interesting characterization. In his frequent urbane moments, Fonda recalls his own performance and visage as Wyatt Earp in John Ford’s all-timer My Darling Clementine. But other times, his manner of dress at times anticipates his dark garb in Sergio Leone’s Once Up a Time in the West, which wouldn’t be filmed for nearly another decade after some full-gonzo casting made possible Fonda’s bravura turn as one of the bedrock villains in Western-movie history. It’s as if Dmytryk and the costumers acted upon the dichotomy of the character’s personality without knowing it.

And now for the central wrinkle: Fonda has a traveling companion (his Doc Holliday, so to speak) who’s cozy enough in their uncommon buddy arrangement — say, what’s going on here? — to reduce the film’s two lead actresses (Dorothy Malone and Dolores Michaels) to not much more than marquee bait. Rarely are they credible romantic forces, even granting that Michaels is involved with a third party in what is essentially a serious bromance. As Fonda’s tag-along buddy with, I’m guessing here, a great cologne collection — Anthony Quinn is a snappy-looking silver-hair who’s faster with a gun than Fonda but with a huge inferiority complex from being afflicted by a clubfoot. Because Quinn is as restrained here as I’ve ever seen him, he’s also as good as I’ve ever seen him, and both he and Fonda tend to relegate top-billed Richard Widmark to “dependable” status when it comes to dominating scenes.

Widmark’s character, however, fits in with the movie’s sub-theme of redemption: He’s an increasingly reluctant and disillusioned member of Drake’s gang who maintains threadbare allegiance so that he can watch the back of a  younger brother (a minor but mouthy Drake subordinate) from getting killed. I did not remember that Frank Gorshin has this kid brother role, which would indicate that the mannerisms for Gorshin’s hysterical Widmark impression of later years — one of the comic’s many — came halfway from the source. (And yes, they two did look a little alike.) Eventually, Widmark has a complete change of heart and becomes officially designated town lawman, which puts him into not always unfriendly conflict with Fonda.

For a movie shot by the great and underrated Joe MacDonald (a Dmytryk regular who also photographed Clementine), Warlock has a lot of those static compositions we see in too many Fox widescreen pictures from the era, and it was around this time that my 12-year-old self started to notice that the color values of, say, even minor Paramount releases blew concurrently released Fox titles out of the water. The presentation here can’t do much to alleviate these built-in limitation, but again, this is a picture that makes it on the strength of some not infrequently pointed writing, two key performances and a posed moral dilemma that remains intriguing.

There is also, for Western fans, a remarkable roster of bedrock supporting players, with familiar faces like L.Q. Jones, Richard Arlen, Ann Doran and Gary Lockwood entering and leaving before they can barely make an impression. Also around are a bearded Wallace Ford as a judge and borderline crackpot; Don Beddoe, who to my recollection must have played enough pioneer town docs to rate a career citation from the Dropsy Foundation; High Noon heavy Ian MacDonald (he was Frank Miller, in fact) as a guy named … MacDonald; Walter Coy, who was John Wayne’s massacred older brother in The Searchers; plus DeForest Kelley in a fairly important role as a gang member with a conscience.

And yes, you probably asked for it, so you’re going to get it: There’s also good old ubiquitous Whit Bissell, the actor who told Melvyn Douglas to shoot the sick cattle in Hud; tried to make sense of Kevin McCarthy’s pod rantings in Invasion of the Body Snatchers; and  “invented” Michael Landon’s hairier self in I Was a Teenage Werewolf. Back in its heyday, I read once that if the porn industry were ever to be outlawed, the entire Southern California economy would go with it. This must have been what it was like in the ’50s and ’60s when Bissell’s incessant employment presumably facilitated studio cash flows. There’s no way you could have this kind of movie without Bissell showing up somewhere — though in this case, Beddoe had already cornered the market (again) regarding Warlock’s doctor role, relegating Bissell into playing yet another “town father” — one of his specialties.