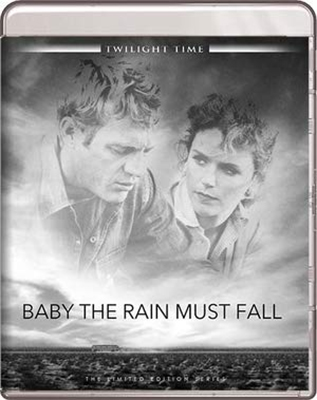 Despite a screen career that was then very much on the move, Steve McQueen didn’t have a film in current release throughout all of 1964 thanks to the sometimes oddball exigencies of theatrical distribution (or, hell, maybe the timing was just a fluke). That’s a long layoff in terms of career momentum, but there’d been three McQueen features in 1963, including two that stoked his rapid-fire ascendency in audience popularity.

Soldier in the Rain is the one that didn’t — though Jackie Gleason and Tuesday Weld, in particular, have always given me a soft spot for it. But compensating mightily was motorcyclist McQueen’s iconographic fence-jumping in The Great Escape (or, rather, his stunt double’s) and the actor’s potent year-end chemistry with Natalie Wood in Love With the Proper Stranger. The last is my favorite Robert Mulligan movie, which means I’ve always liked it a lot more than that filmmaker’s immediately preceding career-maker: To Kill a Mockingbird. As it turned out, Mulligan was also the director of the next screen feature McQueen made: Baby the Rain Must Fall, which Columbia plopped into the mid-January 1965 ghetto after apparently speculating that a Christmas ’64 release would be box office suicide.

At this point, co-star Lee Remick rated top billing, and it’s her picture all the way — this more of a comment on how great she is here than any McQueen shortcomings, though truth to tell, nearly every McQueen performance of the middle 1960s is more interesting. Remick is the reason to see the movie, along with Ernest Lazslo’s cinematography (this was in the waning years of black-and white, a loss from which the movies have never recovered), though music enthusiasts will be attracted to Elmer Bernstein’s era-evocative scoring. Otherwise, this tweaking of playwright Horton Foote’s The Traveling Lady commenced a period in which that he must have felt a bit snakebitten at Columbia Pictures. Just a year later, the studio released Arthur Penn’s The Chase — a Foote book/play that Lillian Hellman and about a million other screenwriters almost exactly a year later to megaflop reaction. Though in this case, the result eventually gained some qualified chops as a major cult movie a few years down the Texas road.

Ahhhhhh, but Remick, who’s cast in Baby as a young mother with daughter in tow (the production’s “find” of a satisfyingly natural one-shot child actress, Kimberley Block). We begin with their bus trip to Southeastern Texas in search of a wayward husband/father (McQueen), who’s part of a weird-to-me parole agreement that’ll spring him from prison on the mandate that he attend night school to learn a trade. Nonetheless, Remick loves him for reasons that aren’t as explicable as the camera’s love for its lead actress, and Laszlo is smart enough to allow his camera to take its time lingering over Remick’s subtly expressed emotions. Elia Kazan did something similar with her in Wild River, the best movie Remick ever made, possibly excluding Otto Preminger’s Anatomy of a Murder (talk about a challenging academic argument, given the contrast in those directors’ individual styles).

McQueen plays a hothead when he’s not being contrite or even affable, with a tinderbox personality that contributed to his imprisonment in the first place. The seeds for this were planted by the now bedridden harridan who ended up raising and taking a belt to him, and this prune’s still palpable presence hangs over the picture to such a degree that Baby all but veers into enters Southern-Gothic-land, Texas setting or not. The timing wasn’t the best on this count because Hush, Hush, Sweet Charlotte had just come out and rendered that form of stylization borderline risible. Even so, this plot detail dovetails not uninterestingly with the actor’s real-life history in a correctional institute after scrapes with the law and his endurance (barely) of a physically abusive stepfather.

Currently the recipient of a single-room live-in residence as a friendly couple’s handyman, McQueen’s character isn’t really the night-school type — choosing instead to pursue the Elvis dream in roadside joints singing compositions he’s penned and dealing more with hecklers a lot more than screaming women. One gets the sense that even if a little career lightning strikes, he won’t advance much above this station, though Glenn Yarbrough’s recording of the title tune whose lyrics McQueen mouths became one of the catchiest MOR hits during the British Invasion, when even Freddie & the Dreamers could manage to rate groupies.

The trouble is that — and this was mentioned a lot at the time — the vocal matchup between actor McQueen and his voice double is among the most jarring in movie history. A simpatico match on this kind if thing is not easy to achieve, though I noticed that the voice doubling for Veronica Lake on the recent This Gun for Hire Blu-ray was exceptional. Here, the differential is so pronounced that it takes you out of the picture.

Baby begins promisingly enough to sustain good will throughout a lot of its running time, and the opening bus sequence is one of the best in the film (given The Trip to Bountiful, Foote must have ridden a lot of rural Texas buses in his formative years). As a widowed local deputy and childhood friend of McQueen’s (which seems a stretch), Don Murray is about what he always was on screen: easygoing, likable and rather colorless. The movie seems to be setting him up to be a fallback romantic option in case McQueen self-immolates, but either because a) it doesn’t want to seem clichéd; or b) can’t make up its mind (either in conception or the editing room), this possibility is never realized.

Despite its shortcomings, Baby is still a rewarding view for pure historical perspective if you love, as I do, to follow career trajectories (though Remick doesn’t even need that qualification). The days of major studios bankrolling major-league leads in small-scale movies about real humans and their day-to-day economic fears went out with push-button driving. In today’s movie market, McQueen and Remick would be knocking off small-town Texas banks, even if the screenwriter had to jump through hoops to determine what to do with their daughter. This said, the picture could use a little more “event,” if only in moderation. But the Blu-ray is generally handsome except for some bleached-out exteriors, including one that I’m surprised got by (either originally in theaters or via this release). Overall, I’m glad I took a look after anticipating this release as heavily as I did. I’m not sure I’d seen since it since ’65 when I caught it at a nearly empty campus theater.